The basic technology behind small-piece and large-piece formed products is pretty well-developed, but there is always room for improvement. 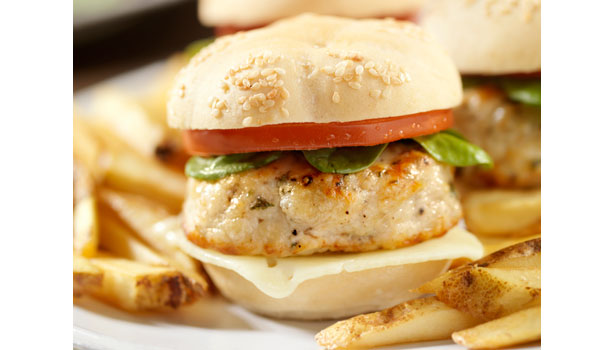 A chicken nugget and boneless ham may look completely different, but they share at least one thing in common: They are both formed products, albeit of much different sizes.
The basic technology behind small-piece and large-piece products is pretty well-developed, but as changes occur — such as efforts to reduce salt content — processors have had to consider alternative ingredients such as binders and new methods to avoid damaging the fragile proteins.
“[The use of binders, for example,] becomes more of a case-by-case or product-by-product consideration than a general application,” says Joseph G. Sebranek, Ph.D., distinguished professor of animal science, Iowa State University, based in Ames, Iowa.
Most formers up to this point have been extrusion-type formers which need good temperature control and correct viscosity of the meat batter, says Jeff Sindelar, Ph.D., associate professor/extension meat specialist, University of Wisconsin-Madison.
“The down side is that not every product forms the same; there can be differences in shape, shelf life and texture,” he says. “So there are definitely opportunities for new technology for forming products.”
Certainly, formed or shaped products can look manufactured, too refined and, basically, not homemade, he says.
“The protein needs to be able to withstand pressure from the forming process, so it needs to be cold, low-moisture and dense,” he says. “As you apply pressure and compaction for efficiencies, the fat and muscle cells can become damaged in the product, which leads to shelf-life, color and overall product-quality issues.”
When dealing with poultry and fish in particular, texture is critical, as the meat is already tender and even soft, says Sebranek.
“It is more challenging to retain a realistic texture, bite and chewability with meat from those species,” he adds. “Of course, the advantages are the almost unlimited variety of batter or breadings, coatings and flavoring ingredients that can be incorporated.”
Battered or breaded products also, of course, need good adhesion of batter and breading materials to the meat so that they stick during handling and cooking.
“Retaining a ‘fresh’ flavor [or preventing off-flavor] is also an ongoing challenge with these kinds of products,” he says.

Some of the new processing advances look at ways to prevent compaction and focus instead on delivering a “hand patty” method through the equipment.
Last year, for example, Sysco and Cardinal Meat Specialists Ltd. announced their new Natural Texture Forming technology that loosely weaves ground beef together.
Using the new process, Cardinal’s “Revolution burger,” made with 100% Certified Angus Beef brand cuts, offers a tender, juicy patty with a lighter density and texture than a traditional hand-formed burger — and promises a quicker cooking time with less shrink. (The burger was awarded The National Provisioner’s 2012 New Product of the Year, as profiled in the May 2013 issue.)
According to Sindelar, “rollers deliver air and don’t abuse the product, and handle processing efficiently, so it works.”
Product formulation also shows promise for new advances in food safety or product development, says Alden Booren, Ph.D., professor emeritus, Michigan State University, Lansing, Mich.
“I think processors have taken full advantage of the current technology; however, there is always an opportunity for improvement, and new ideas of application of forming principles will propel this technology to greater [or maybe ‘new’] levels of popularity and profitability,” says Booren.

Binders have been used for decades to thicken or improve meat’s texture by absorbing water, but they are starting to come under attack by the consumer media.
Critics call them “meat glue” because they are enzymes — powdered or liquid enzyme fibrin, transglutaminase or TG — made of protein that bind together different pieces of meat. Traditionally, they have been used in whole or chunked products, and can range from natural sources like oatmeal, breadcrumbs, rice and even semolina to phosphates or hydrocolloids such as carrageenan.
Enzymes are used in just a few applications, and are usually reserved for restructured foodservice products. If they are used in packaged meat products, they must be listed on the ingredients and labeled as “formed” or “reformed.”
“Binders are always of interest to consumers, and not always in a positive way,” says says Jeff Sindelar, Ph.D., associate professor/extension meat specialist, University of Wisconsin-Madison.
Indeed, consumers may be skeptical of binders and think they are being used to extend the volume of meat, so it can cost less, which is what fillers and extenders can do.
“I think public perception of formed products is negative,” says Alden Booren, Ph.D., professor emeritus, Michigan State University, Lansing, Mich. “However, the public likes the many conveniences the formed products offer.  Sure, the consumer is skeptical of products they can easily tell have been ‘formed,’ while other products that aren’t as easily perceived to be ‘formed’ are OK or at least acceptable to consumers.”
For consumers who want a clear-label alternative to binders with phosphates, they can look to plum-derived ingredients, which utilize naturally occurring sorbitol and fiber, such as a 3 percent plum puree added to low-fat ground meat for extra juiciness.
“In my opinion, consumers have been buying various formed products for quite some time, and I don’t believe there is skepticism of formed products per se, as long as they look good, taste good and are reasonably priced,” says Joseph G. Sebranek, Ph.D., distinguished professor of animal science, Iowa State University, based in Ames, Iowa.
KEYWORDS: chicken formed products gums, binders and emulsifiers ham processing equipment