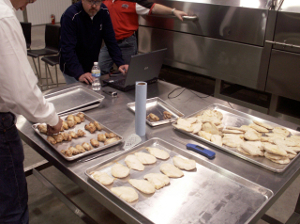 To address those issues on behalf of food processors across the continent, a manufacturer of advanced thermal cooking, pasteurizing, and chilling/freezing systems has inaugurated a leading-edge test kitchen in Maastricht, Netherlands that will enable processors seeking productivity and quality improvements to conveniently see and test the latest systems for cooking protein, vegetable, and bakery products.

“This facility demonstrates many of the most efficient technologies for processing foods that many European consumers are looking for today,” says Bartosz Psiuch, director of food processing equipment distributor Alimp (Mysłowice, Poland). “It creates a highly promising opportunity for large and small processors to try out systems that have never been seen before in Europe, and can enable them to better service their markets, whether ready-to-eat, food services or institutional.”

Situated within a convenient proximity of Europe’s capital cities (e.g. 55 minutes from Dusseldorf, Brussels, or Cologne), a tour of the Maastricht test kitchen is an easy day trip for most processors located on the continent via train,  air, or even automobile.

Designed and operated by Unitherm Food Systems Inc (Bristow, OK, USA), the cooking and chilling systems demonstrated at the Maastricht test kitchen include the latest continuous systems of various capacities that can provide very substantial productivity as well as dramatically increased yields and other benefits for the cooking and pasteurizing of various products. Examples of system capabilities include inline smoking and browning, small footprint “spiral” ovens, and continuous pasteurizing and grilling of vegetables such as onions and peppers. The equipment in the test kitchen is arranged in in-line configurations, so that processors can experience how continuous systems fit and work together.

Psiuch emphasizes the value of guest companies being able to test run their products in this facility, not only to see firsthand how various equipment performs, but also to determine how it can optimize their processes - before they make any investments.

Decisive tests
Unlike some equipment demonstrations, the systems available at the Maastricht test kitchen are available for processors to perform realistic trial runs of their products. For example, one recent visitor test-cooked approximately 500 kilos of chicken, says Unitherm’s Francisco Sierra, who is based at the new Netherlands facility. He adds that many European processors can benefit from improving profitability and quality, but can also gain important flexibility by using some of the new continuous cooking systems.

“Many European companies are producing snack items such as chicken wings,” says Sierra. “They want to develop a product with a very nice color, using their own recipes, whether teriyaki-style wings,  Buffalo-style wings, or any other flavor. Using our Spiral Oven they can achieve that while at the same time increase their yields substantially.”

Sierra explains that when chicken wings are cooked in a conventional “batch” oven, they must first be placed in trays. “It takes considerable labor and time to load those trays,” he says. “In total, each batch takes about 50 minutes, on average. But using a continuous cooking line, that same amount of chicken will likely take about 20-22 minutes. This system maximizes the effects of color development and minimizes shrink. So, productivity is increased, quality and yield are improved, and the cost of labor is reduced.”

“This will be a breakthrough to European companies that use a traditional process for smoking ham,” says Sierra. “We can literally say, ‘What is taking you five hours, you can now do in 60 seconds,’ through inline smoking and browning.”

Sierra notes that, as an example, he recently visited a large manufacturer of smoked hams that was dunking cooked hams in a vessel and then transporting them to a smokehouse where they were smoked for three hours.

“This was a labor-intensive and messy process,” he explains. “Each ham in a batch had to be dunked before the group was transported, which exposed all of the hams to cross contamination for up to 35 minutes. Also, throughput was slow. After installing the IR Inline Smoking and Browning system, the company is able to produce in three to four hours the volume that previously took all day. Also, the new system smokes with condensates, which creates more genuine flavor and appearance, with greater uniformity. And because the system smokes, browns and caramelizes in one pass, the company is simultaneously improving efficiency, reducing labor costs, reducing the size of the footprint involved, while improving on food safety.”

Something for everyone
Unitherm’s Maastricht test kitchen includes advanced systems that can be highly beneficial to food processors of many sizes and categories.

Systems such as the Micro Spiral Oven are affordable for even small businesses and startups, and require only a small footprint. This highly flexible system can be used for producing a wide array of products, ranging from chicken and bacon bits to pies and potatoes. It is also a practical system for replacing outdated impingement ovens and moving from a batch process to a much more consistent and efficient continuous process. The Micro Spiral Oven also meets the EC of perspective on pass-through cooking.

In addition, a flame grill with the most ribbon burners in the industry that produces authentic bar-marks for a flame grilled appearance; and a newly released machine called the Tunnel of Fire that can flame roast chicken in 30 seconds.

For the many processors who cook vegetables such as onions and peppers, a Unitherm flame pasteurization system will demonstrate a quantum increase in throughput and yield improvement. For example, the traditional way to peel onions is a mechanical process that reduces onion weight by 25-30%.  Using flame pasteurization the onions are peeled much more quickly and weight loss is minimized. The same system is ideal for peeling peppers, grilling tomatoes and tomatillos, and cooking other products.

David Howard, Unitherm CEO explains that the mission of the Maastricht test kitchen is to provide processors with the opportunity to view new thermal cooking technologies and to gain hands-on experience through the use of the equipment to test run their own products.

“The future of purchasing food processing machinery is going this way, where the customer can demand to go into a kitchen and actually try out their product on the machinery,” says Howard. “Only then can they feel confident that the equipment best serves their operational parameters and expected results.”