Phages allow processors to go on the offensive

The use of bacteriophages in the war against pathogenic bacteria continues to intrigue processors. “We’re just taking something that happens in nature all the time and focusing it on certain pathogens,” explains Paul Ebner, associate professor of animal sciences at Purdue University, West Lafayette, Ind.

Phages are actually the most abundant form of life on Earth, so they are something we are all exposed to daily, says Jason Gill, an assistant professor in the Department of Animal Science at Texas A&M University in College Station.

Phages work by infecting their target bacteria, killing them and making more phages in the process, which can go on to kill more bacteria.

“Bacteriophages are very specific for certain types of bacteria,” Ebner says. “How they work in nature is once they can find their host, they are obligate parasites, which means they don’t exist without their hosts.”

Phages have the advantage of being specific to a particular species or even strains within a species. For example, one can selectively target one species of known pathogenic bacteria and leave the rest of the flora intact, Gill says.

Another of a phage’s natural benefits is the fact that no organoleptic changes are associated to the food with phage application.

“They can be applied to finished product as well as during processing, and are compatible with minimally processed foods as well,” Gill says. “The phage doesn’t need to be removed or inactivated before consumption, but they will be inactivated by cooking or pasteurization treatments.”

Phage products have been approved for use in food processing to fight Listeria, Salmonella and E. coli O157:H7. Some of the phage products are marketed as aids for various processing steps including finished product, while one is being used for decontaminating cattle hides of E. coli O157:H7 just prior to harvest.

Gill sees the next step for biotechnology companies producing phages to create products against the broader group of big six (or seven) shiga toxin-producing E. coli and Campylobacter.

“There is a lot of interest in phages now, not only for use in foods, but also for animal production, veterinary and medical applications,” Gill says. “One of the things my lab is focusing on is to get into the biology of the phages themselves, to see if we can pick phages that will work better or to engineer them to work better.  Right now all the phages used are natural and not engineered in any way.”

Groups throughout the U.S. and internationally are working on different facets of phage therapy ranging from food safety interventions to combatting antibiotic-resistant infection. For example, Ebner’s group at Purdue started working with phages about six years ago. Ebner began by examining issues in pre-harvest food safety. One issue that emerged was the increase in the number of Salmonella-positive animals after transportation.

“We wanted to find something that could work very quickly, was safe and was very effective, so that’s when we looked at phage therapy,” Ebner says.

Ebner’s team microencapsulated the phages so they could be given to the pigs orally. In the final experiments with Salmonella, the group mixed the phages in the feed and had the pigs eat the feed for five days before they were processed. The group saw a significant reduction in Salmonella colonization.

For the past 14 years, William Huff, research microbiologist at the U.S. Department of Agriculture’s Agricultural Research Service at the Poultry Production and Product Safety Research Unit at the University of Arkansas in Fayetteville, has conducted research to try to find alternatives to antibiotics using phages in controlling animal diseases, particularly poultry diseases. 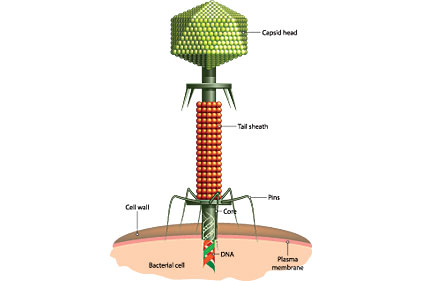 Where Huff sees one of the greatest opportunities in the poultry industry is in environmental augmentation with phages. For example, a prepared phage mixture could be sprayed in processing facilities as well as hatcheries to keep bacteria levels below the threshold that birds get a disease.

“If we can take bacteriophage and put it out in those environments where there are pathogens and we know what those pathogens are, then we can reduce the number of the bad guys in the environment to levels that are below that threshold, so that the animals never will get sick,” Huff says.

Phage specificity is a benefit but also a problem as a specific phage is needed to infect most of the pathogen strains needing to be controlled.

“That makes it more challenging when looking at bacteria like Salmonellaor Campylobacter, which are more diverse, so you would need to use a mixture of several phages to cover all of the strains out there,” Gill says.

Specificity can be an advantage over antibiotics because pathogens selectively can be killed and leave the good bacteria alone whereas antibiotics are not like that, Huff says. Bacteria are also good at becoming resistant to antibiotics, whereas phage products can already take into account emerging resistance and include a mixture of phages to kill new resistant bacteria, he explains.

Phages also have their own physical limitations. For example, they can be inactivated by high heat and extremes of pH, Gills says. Another issue is that like many antimicrobials, phages tend not to function as well at colder temperatures, but that may be something that could be circumvented by finding more cold-adapted phages, he says.

Foodborne pathogens like Salmonella and E. coli also get down into the crypts of the intestinal tract, where phages can have a difficult time reaching, Huff says.

“It’s not a question of whether it works or not,” Huff says. “It works, but you have to be able to deliver that bacteriophage to those bacteria.”

Clearly phage use in foods is a relatively new concept, and the industry is still figuring out where phages might make sense compared with other antimicrobial interventions.

“Part of it is finding out in what product and processing stages you can get good efficacy with phage, and what the best intervention points are against certain pathogens,” Gill says.

Meat and poultry processors are still interested in phages for the promise of having a new very gentle, specific antimicrobial that can be used in situations where there aren’t many other options for interventions. For example, processors can’t spray live cattle with scalding water or high concentrations of chlorine, but phages would be fine because they are so gentle, Gill says.

On the product side, more pressure is going to be placed on reducing antibiotic use in animal production. Phages will be able to play a role in supplementing or replacing antibiotics that control disease or promote growth.

“Phages will find their niche in these systems as a piece of a larger food-safety intervention strategy, probably most useful in decontaminating raw product and in minimally processed products where there aren’t a lot of other antimicrobial options,” Gill says. “There has already been some success in getting products against a few pathogens to market, but it will ultimately be up to industry to decide what strategies are most economical for a given type of product.”

Ebner believes phages will gain more acceptance as more products are released. “With some larger, more comprehensive trials in animals, there will be more interest in groups trying to get some of those different therapeutics approved so they can be commercialized,” he says.

He also feels phages have a place in pre-harvest interventions all the way through processing.

“We’re not the only groups that have shown it, but we have shown that you can reduce the amount of pathogen in the actual intestine of the animal before it’s brought into the processing facility,” Ebner says. “There are other products that are available at all these different stages. Food safety requires a multi-faceted approach, so they can be one aid, but also they can be used at all these different phases of food production. When they are coupled with a lot of the other interventions that are available, it can be a part of a very effective strategy.”

In our 2014 Food Safety Report that published this spring, Texas A&M University’s Jason Gill and Matthew Taylor give the basic information needed by anyone investigating the use of bacteriophages. Read “Fighting microbes with microbes” by visiting http://bit.ly/2014FSReport.