This website requires certain cookies to work and uses other cookies to help you have the best experience. By visiting this website, certain cookies have already been set, which you may delete and block. By closing this message or continuing to use our site, you agree to the use of cookies. Visit our updated privacy and cookie policy to learn more.
Home » Queen City Sausage named 2014 Independent Processor of the Year
Meat and Poultry Industry NewsSausageIndependent Processor 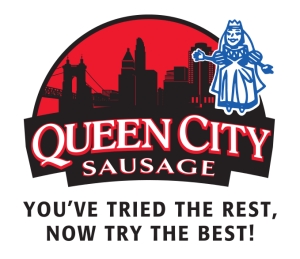 Queen City Sausage was founded in 1965 by Elmer Hensler and his partners. Hensler had been involved in Cincinnati’s meat-processing industry since he was a teenager. Over the years, he bought out his partners and has kept Queen City Sausage growing and thriving, even as many of its competitors were sold off or went out of business. At 84 years old, Hensler still works in the office every day, and the company adheres to his demands for quality products: only the finest meats are used, with no fillers; only hickory chips are used in the smokehouses and not liquid smoke.

The company is perhaps best known for its bratwurst — the official brat of the Cincinnati Reds and Cincinnati Bengals — but Queen City Sausage also makes a variety of mettwursts, Italian sausage, wieners, franks and deli meats. Queen City also produces goetta, a regional favorite that includes beef, pork and steel-cut oats. Its products can be found in retailers and restaurants all across the region. The company also hosts a Queen City Sausage Festival each July, where some of Cincinnati’s top restaurants make unique dishes with Queen City products. The free festival includes lives music, rides and games,  and attracts tens of thousands of visitors. This year's festival is July 11-13 at Newport’s Riverfront Levee.

The award was judged by members of the editorial staff of the Independent Processor and its sister publication, The National Provisioner, as well as meat industry experts. Judges were looking for companies that were financially successful but also excelled in areas like product innovation, community outreach, sustainability and employee welfare.

“There are many processors across the country that represent the best aspects of the meat industry, yet Queen City Sausage stood out from the pack for its innovation and long-standing tradition,” Gazdziak said. “After almost 50 years in business, the company is still growing and expanding, and its products are, naturally, excellent. Queen City gives away over 35,000 sausages each year at various Cincinnati charity events, making it an important part of the Cincinnati community. We are proud to award Queen City Sausage as our first ever Independent Processor of the Year.”

The Independent Processor is the only trade magazine in the United States dedicated solely to covering small and mid-sized processors. The magazine is published by BNP Media, headquartered in Troy, Mich., and publishes six times a year. For more information, visit www.provisioneronline.com, the home to Independent Processor and its sister publication, The National Provisioner.