Rising input costs, disease outbreaks, trade restrictions and channel customer mandates have challenged the pork supply chain in recent years to work harder to remain profitable. In such an integrated industry, changes at any level will likely have a ripple effect throughout the industry. Global meat packers have benefitted from a technology that illustrates this trend. Immunological castration (IC) has been implemented in more than 60 countries worldwide for as many as 10 years and is proving to be a profitable transition for farmers and meatpackers alike. 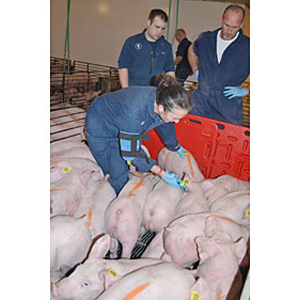 “The technology has improved meat quality,” owner Tom De Stoop says. “Meat percentage has gone up by 1 percent, which is quite significant for us. It has also been significant in terms of profits. Our farmers have found economic advantages to using it even after deducting costs associated with the technology and labor to administer it. Our retail customers, including Colruyt, support the technology and have worked to inform consumers, with no negative reaction.”

As the first immunological product in the U.S. to safely and effectively manage off odors that can occur from cooking pork from some male pigs, Improvest® (gonadotropin releasing factor analog – diphtheria toxoid conjugate) is approved by the U.S. Food and Drug Administration (FDA) as a veterinary prescription product. Improvest uses the pig’s own immune system to temporarily provide the same effect as physical castration but much later in a male pig’s life. By capturing the inherent growth efficiencies of intact males, Improvest has been proven to add value to the bottom line. IC first was registered in Australia in 1998 as the country looked for ways to address meat quality issues and improve animal care.

“We needed to look at technologies that [gave] us options,” said Darryl D’Souza, general manager of research and innovation for Australian Pork Limited, which promotes the nation’s pork industry. “Off odors and meat quality have posed challenges to the country’s pork supply as stakeholders have primarily used slaughter weights to manage the issue. Our research has shown no correlation between off odors and harvest weights. In 2013, adoption of IC increased from 30% to 50% of male pigs (in Australia).”

“At profit optimal market weights packers will benefit economically from larger, leaner carcasses while maintaining optimum carcass characteristics, including belly quality and fat content,” DiPietre said. “It’s important to help industry stakeholders understand the value there is to be captured.”

IMPORTANT SAFETY INFORMATION: Pregnant women should not administer Improvest. Women of childbearing age, as well as men, should exercise extreme caution when administering this product. Exercise special care to prevent accidental self-injection because of negative effects on reproductive physiology in both men and women. However, there is no risk associated with consuming pork from animals administered this product. Improvest should not be used in female pigs, barrows, or male pigs intended for breeding. Full Prescribing Information can be found on the Web site: zoetisUS.com/Improvest.