Practicing the art of Charcutería

New book details how to put a Spanish spin on sausage making. 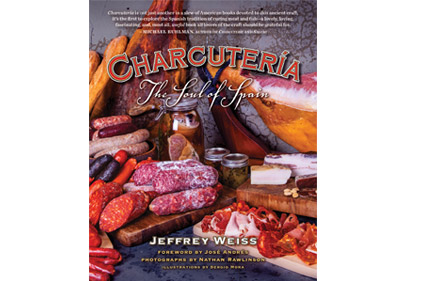 One of the more recent trends to hit restaurants has been the rise in charcuterie, or the curing of meats like sausages or hams. As charcuterie sampler plates and house-made sausages show up on more menus, they serve as a reminder to diners that there is an art to meat processing. Producing the perfect salami or pancetta requires just the right spices, pork and drying time, and a restaurant or a meat processor who can consistently and safely produce those types of products deserves a little appreciation.

Jeffrey Weiss is a professional chef with more than 15 years of experience. He developed an interest for charcuterie early on in his culinary career, working with renowned chefs Steve Chan and José Andrés. After winning the prestigious ICEX culinary scholarship, he was able to live in Spain, learn its regional cuisines, and cook in the kitchens of top Spanish chefs. Through that experience, he learned about the Spanish style of charcutería. His new book, Charcutería: The Soul of Spain, features more than 100 recipes and discusses Spanish-style butchering and meat-curing techniques.

“I knew a little about chorizo and some of the Spanish charcuterie, but once I went there, it really drove home the point that there is so much that we have never seen in this country,” he says. “There are so many really cool recipes and products and techniques, and elements of charcuterie that have never made it to our shore.”

Charcuterie, as it is known to meat processors and chefs in the United States, has many common denominators with charcutería as it is known in Spain. In either case, you are attempting to draw water out of the meat and cure it for a pre-determined amount of time. However, he noted some key differences in Spain.

Weiss points to a difference in how the pigs in Spain are treated; specifically, how they are fed. The Ibérico pig is known for the quality of its meat, but its diet of bellotas, or acorns, is what gives the product its distinctive taste. Secondly, each type of product requires a specific cut of pork, which affects the taste and texture of the end product.

The other key difference, Weiss notes, is in the ingredients put into the sausages. The Spanish charcutería products tend to have bolder spices and flavors than their French or Italian counterparts, which lean more toward softer/sweeter Medici spices like allspice and nutmeg.

“If you want to add that flavor of Spain, with good garlic and smoked paprika, you have to get the right materials,” he says.

There are many types of pimentón, or smoked paprika, that are readily available in the United States. However, the type that is favored in Spain, is pimentón de la vera, which comes from the region of La Vera.

“You can go to your local supermarket and get something called smoked paprika. It is not the same as true pimentón de la vera,” he adds.

Weiss’ book features recipes that he discovered while working in Spain. As is typical of the country, the recipes are based on percentages and not exact amounts. For example, a typical chorizo sausage starts with a lean-fat ratio of 70-30 or 75-25 percent, and for every kilogram of meat, the sausage maker adds set percentages of salt, garlic, paprika and other seasonings. By using the percentages, the recipes in the book can all be scaled up or down easily.

For processors that are looking to add a little Spanish flavor to their products, Weiss’ recommendation is simple enough. Get the best raw materials, including the pork, and let the product speak for itself.

“That’s all the Spaniards do,” he says. “They get the best quality garlic — they either grow it themselves or they get it from the guy down the street. The smoked paprika comes from their uncle that lives in La Vera. The pork, they took the animal’s life themselves, and they’re going to honor it by using every part of it. That’s where the tradition of charcuterie comes from.

“For my money, get the best products you can, and if that means getting products from Spain, do that and do justice to the thing that you’re trying to make,” Weiss adds.

Last year, Weiss opened Jeninni Kitchen+Wine Bar, located in Pacific Grove, Calif. He employs some of the charcutería methods he’s learned there, making fresh sausages, pates and terrines. He points out that many restaurants are trying their own programs, but he is concerned that over-regulation by the USDA may hamper the practice — a refrain that will be familiar to many small meat processors.

“In this country, especially in restaurants, it’s really difficult to get going with your own dry curing program, because there are certain controls in place,” he says. “I’m happy that they’re there, for one thing, because if someone who doesn’t know what they’re doing tries to do this stuff, there could be a problem. On the other hand, I’m very saddened by it.”

He points to artisan cheesemakers, who were dealt a blow when the Food and Drug Administration ruled that they were no longer allowed to age their cheeses on wooden boards. Many cheesemakers follow this centuries-old practice, and many recipes are developed specifically for the cheese to age on a wooden board, so the FDA’s crackdown could have a potentially devastating effect on that community.

“I would like to see small restaurants and small artisans who are doing charcuterie come together with the USDA and work together on a more logical program that works for everybody,” Weiss explains. “I don’t think this trend is going to stop, I don’t see it dying down. I think we can find a happy medium and not be held to the same HACCP regulations that the larger companies have to follow.”