Putting the sizzle back in bacon 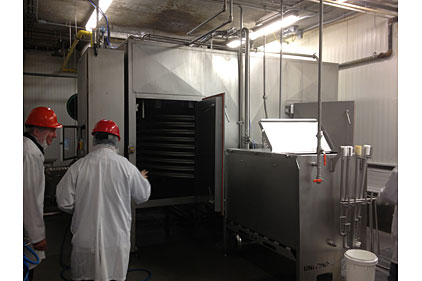 As the world’s appetite for bacon dramatically increased over the last few years, processors adopted a newer, faster technology for processing in high volumes: the linear microwave oven. But because of taste and appearance drawbacks, many processors went looking for a cooking system that could produce bacon (and other products) that looked and tasted as natural and delicious as pan-fried bacon. They found it in the spiral convection oven.

“Spiral-oven technology features many controls that enable operators to regulate various parameters that affect how the product will be finished,” Psiuch adds. “This allows you to cook bacon or a wide variety of other products in ways that really appeal to your customers’ tastes.”

Olymel, in Saint-Hyacinthe, Québec, produces bacon as well as a variety of other cooked and sliced meats. In November 2012, the company purchased a spiral oven from Unitherm Food Systems to cook bacon bits, pizza toppings and flaked bacon.

“Taste and appearance were deciding factors in the purchase of our spiral oven. Both are important to the people who purchase our products,” says Martin Croteau, plant manager at Olymel.

Spiral ovens such as Unitherm’s convey food upward on acontinuous conveyor belt that travels in multiple, circular tiers inside a single oven enclosure. As bacon products cycle upward through the spiral oven, fat is rendered from the ascending meat and is dispersed onto the bacon on the lower belt tiers. In this manner, the bacon is basted and cooked in its own juices, providing the taste, aroma and appearance of a traditional, pan-fried product.

Many microwave ovens have a hold-down belt that prevents bacon strips from rolling up, but the spiral oven is designed so the finished product is not flat, and has a home-cooked appearance.

Psiuch notes Unitherm has been granted a patent in Europe (a similar patent is pending in the U.S.) for its method of cooking “more tantalizing” sliced bacon, and it will distribute licenses for utilizing this patent to customers on an individual basis.

The spiral oven also meets high volume requirements along with some very attractive economies. For Olymel, another determining factor was the spiral oven’s smaller environmental footprint. Unitherm’s spiral measures 12.5 feet by 14.5 feet by 11.8 feet and has up to 150 feet of belt.

Additionally, a linear microwave oven’s footprint would have to be increased to add cooking capacity, but a spiral oven’s capacity and throughput can be increased by simply adding more belting. Although this makes the equipment somewhat taller, the advantage of a small footprint is retained.