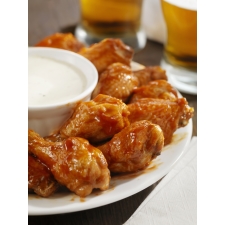 With the second biggest eating day of the year after Thanksgiving upon us – Super Bowl Sunday – there's no hotter time of year for chicken wings, which have become a staple food on Super Bowl menus.

According to the National Chicken Council's 2015 Wing Report, 1.25 billion wings will be eaten during Super Bowl XLIX, as fans watch the Seattle Seahawks and New England Patriots battle for the Lombardi Trophy, matching the record tied last year when the Seahawks defeated the Denver Broncos.

To put that into perspective, if 1.25 billion wing segments were laid end to end, they would stretch back and forth from CenturyLink Field in Seattle to Gillette Stadium in Foxborough, Massachusetts… almost 28 times. With the Super Bowl being played in Arizona, 1.25 billion wings would circle the Grand Canyon 120 times. That is enough wings to put 572 wings on every seat in all 32 NFL stadiums, according to the Council.

In terms of weight, 1.25 billion wings would weigh 5,955 times more than the weights of the Seahawks and Patriots entire 52-man rosters combined.

The average price (wholesale, not retail) of whole wings is currently $1.71/lb, up from $1.35/lb at the same time last year, according to the Daily Northeast Broiler/Fryer Report by the U.S. Department of Agriculture's Agriculture Marketing Service. This is down significantly from when wing prices hit a record high of $2.11/lb in January, 2013.

Wing prices traditionally go up in the fourth quarter of the year as restaurants and supermarkets stock up for the Super Bowl, and prices usually peak in January during the run-up to the big game.

While Seattle is known for many things, including its coffee, fish tossing and Fortune 500 companies, chicken wings aren't one of them.

Residents of Seattle tend to punt on chicken wings, as they are 17 percent less likely to eat chicken wings in general than the average resident of the top 42 U.S. markets, according to The NPD Group's Local Market CREST Restaurant database; two years ending September 2014. While faring a bit better, but still below average, Patriots fans in Boston are 8 percent less likely to consume wings from a restaurant than the average resident.

But the Seahawks-Patriots matchup was the best possible scenario out of the four remaining NFL playoff teams/cities for wing eating. Here' a look at how the four stack up:

"The good news is, fans will try more wings if their team gets in the Super Bowl," noted Harry Balzer, The NPD Group's chief industry analyst and vice president. "We know wing consumption increases more than other foods during the Super Bowl. It did in Seattle last year after they won. While the citizens of Seattle still eat wings less often than the average eater, our research indicates that order incidence for wings rose considerably last year in that market."

Added the Chicken Council's Super, "With the Patriots in the game, we're hopeful this trend will continue and we'll see 'inflated' wing consumption this year in New England."

More than half (56 percent) of U.S. adults who eat chicken wings say they typically like to eat their wings with ranch dressing, according to a new National Chicken Council poll conducted online in January 2015 by Harris Poll*. Ranch is once again the #1 side or sauce typically eaten with wings, up from 51 percent last year but shy of the record of 57 percent two years ago. Only about one-third (36 percent) like to eat their wings with blue cheese dressing. This is up from 32 percent last year. Barbecue sauce even topped blue cheese, coming in at 42 percent.

The survey asked which dipping sauces or snacks chicken wing eaters typically like to eat with their wings. They could choose more than one option.

"I was shocked to see Blue Cheese go down by this margin, again," noted Super. "Although, I'm from the Northeast – for me, putting Ranch on wings is like putting ketchup on a hot dog."

The Drumette, Flat or Whole Wing?

The vast majority of wings, especially those destined for restaurants, are disjointed, with the third joint (the thin part known as the wing tip or flapper) being exported to Asian countries and the meatier first and second joints being sold domestically. The wing is usually split into two parts – or segments – known as the "drumette" and the "flat" and sold to restaurants or retail grocery outlets.

According the survey, of those who eat chicken wings, 46 percent prefer the drumette, 25 percent the flat and 10 percent prefer their wings whole. Nineteen percent say they don't have a preference, they like them all.

For more information on wings, including their history, relationship with football, recipes and more, visit the National Chicken Council website for the full 2015 Wing Report.

This survey was conducted online within the United States by Harris Poll on behalf of National Chicken Council from January 13-15, 2015 among 2,019 adults ages 18 and older (of whom 1,595 eat chicken wings). This online survey is not based on a probability sample and therefore no estimate of theoretical sampling error can be calculated.

Erin Jentz is the digital content manager at BNP Media and web editor for National Provisioner.
You must login or register in order to post a comment.