This website requires certain cookies to work and uses other cookies to help you have the best experience. By visiting this website, certain cookies have already been set, which you may delete and block. By closing this message or continuing to use our site, you agree to the use of cookies. Visit our updated privacy and cookie policy to learn more.
Home » Advanced heifer carcass maturity and beef palatability
Meat and Poultry ProcessingBeef
Meat Science Review

Beef grading in the United States has been implemented according to standards set by the U.S. Department of Agriculture’s Agricultural Marketing Service (USDA-AMS) in 1926.  Amendments, however, are periodically made to the beef standards to reflect new scientific findings. Recently, the USDA-AMS posted a notice on the Federal Register for comments on modernizing standards to allow for the use of documentation of actual age or dentition, a method used by the USDA’s Food Safety Inspection Services (FSIS), when determining beef carcass quality grades. This amendment would allow carcasses with advanced physiological maturity, which are less than 30 months of age by dentition or documentation, to still be graded as A maturity.

Using the current USDA beef quality grading guidelines, A maturity carcasses with a small degree of marbling grade Choice, while B and C maturity carcasses with a similar marbling score grade Standard and Commercial or Utility, respectively. In July 2017, Standard carcasses received a discount of approximately $28 per hundredweight, while C and older maturity carcasses received a discount of $34 per hundredweight compared with Choice carcasses (USDA, 2017). The current research was conducted to determine whether discounts are warranted based on palatability of product from A, B, and C maturity heifer carcasses less than 30 months of age by dentition.

Carcasses were selected from feedlot heifers finished in the Western United States and Canada. Carcass data and product from 90 heifer carcasses were collected on four days over a three-month period at a commercial beef-processing facility. All carcasses were less than 30 months old by dentition, but chronological age was not known. Based on physiological maturity, 30 carcasses were selected per A, B and C maturity group, and all carcasses were selected to have Small to Modest marbling scores. Average marbling scores for each maturity group were similar. Average carcass weight was 906 pounds, and no carcass weight differences occurred. Beef strip loins and outside rounds were obtained, and following a 14-day aging period, steaks were cut from each and used to analyze cook loss, Warner-Bratzler Shear Force (WBSF), insoluble and soluble collagen, and consumer sensory attributes. Data were analyzed using the Mixed Model procedure of the Statistical Analysis System (SAS Institute, Inc., Cary, N.C.).  Significance was determined at P < 0.05 and data were considered trending at P < 0.10. 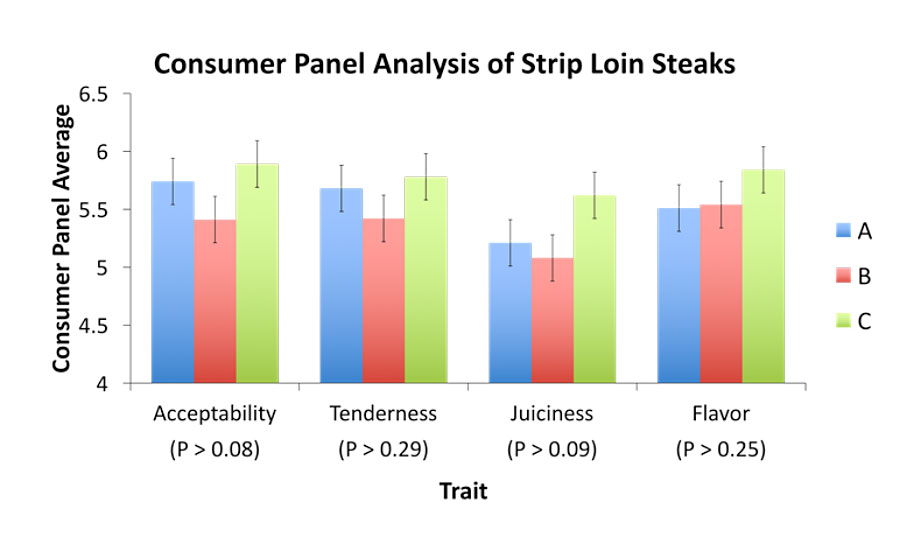 Our research suggests that advanced physiological maturity does not decrease palatability of strip loin or outside round steaks from carcasses of heifers less than 30 months of age. These data are consistent with other recent research that identified cattle younger than 30 months (Acheson, 2014; Semler, 2016). Collectively, this information indicates carcasses from cattle less than 30 months of age by dentition could be considered A maturity for grading purposes with no detrimental effect on beef palatability.

The authors are grateful for support from The Beef Checkoff and the Idaho Beef Council.  NP

Opportunities flourish for students at the 71st Reciprocal Meat Conference

Kacie Salove is a student at the University of Idaho and placed second in the Master Research Competition at the American Meat Science Association’s 70th RMC in College Station, Texas, this past June.

Z.G. Reynolds is with the University of Idaho, Moscow.

J.A. Nasados is with the University of Idaho, Moscow.

Ronald P. Richard, M.S., is Vandal Brand Meats manager and instructor at the Univ. of Idaho.

Can heifer feedlot performance be controlled?