Hormel Foods has supercharged its newest growth engine — the Deli Solutions group — and looks to outpace the competition to the winner's circle in the deli marketplace.

Every vehicle that is driven, whether vintage or brand new, needs a tune-up now and then. Some vehicles benefit from a simple oil change and inspection, while others improve with the addition of high-end modifications or more powerful engines.

In February 2018, Hormel Foods began a major modification to its own symbolic vehicle, when chairman of the board, president and CEO Jim Snee announced the formation of a new business group — today named the Deli Solutions group — and stated, unequivocally, that the supermarket deli business would be a powerful growth engine for the company moving forward.

“The company has, for the first time, really put the resources against the deli and is demonstrating that we truly believe this is our opportunity,” he says. Yet, this was no spur-of-the-moment change. In fact, the wheels of this new vehicle had begun spinning long ago for Hormel Foods.

“While the industry is growing, the traditional deli section has not changed much in the last 40 years,” Baker explains. “We’ve got to help our retail partners make some changes because the competition for great food is everywhere.”

As the deli and foodservice landscape has become much more competitive (consider take-and-bake home-meal replacement options, or the ability to get a meal in non-traditional places, such as a furniture and home goods store, for example), Hormel Foods prepared itself to make a move. The acquisition of Columbus Craft Meats in Hayward, Calif., was the final sparkplug for the new growth engine, allowing Hormel Foods to hit the road on this new adventure. 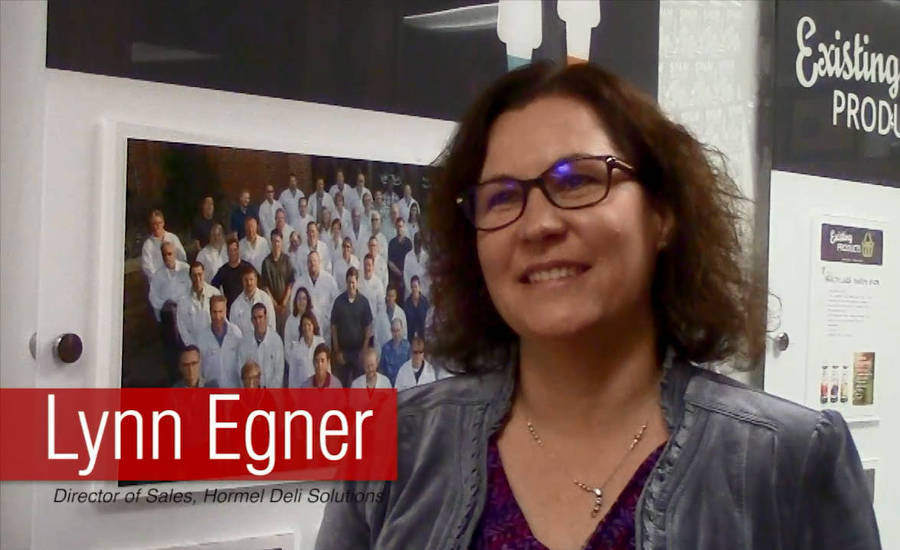 Lynn Egner, director of Sales, Hormel Deli Solutions, discusses the similarities in the corporate cultures of Hormel Foods and Columbus Craft Meats, and how it made combining the two workforces a little bit easier in terms of strategic thinking.

“We had talked several times throughout our company’s history about uniting our deli businesses, but there was never a strong strategic rationale. The acquisition of Columbus Craft Meats, which brought scale and closed the gap in our portfolio, became the catalyst to unite our deli efforts,” he adds.

Like a well-machined custom part, Columbus’ product mix bolted on perfectly to the framework of the new group, says Holly LaVallie, director of marketing, Deli Solutions.

“Columbus rounded out the portfolio to give us an unmatched mix of offerings for retailers,” she explains, “with charcuterie and a snacking portfolio that partnered up so nicely with the behind-the-glass offerings of the Hormel and Jennie-O brands, as well as the extensive prepared-foods portfolio through our foodservice division.”

With the strength of a well-rounded product portfolio as the basis of the group, the Deli Solutions team turned to training and educating its new, combined sales force. According to Lynn Egner, director of sales, Deli Solutions, the new alignment of the group with a direct sales force stands as a key differentiation point for customers.

“We are taking our team from what was predominantly broker-managed to an entire direct sales force, and we’re putting in the resources, time and energy to make sure that it’s set up right,” she says. “The sales strategy is to better align with our customers and have a deeper relationship versus a broader relationship.”

Creating that relationship with customers starts, of course, with training across all product lines now under the Deli Solutions umbrella, as each has its own unique story, LaVallie says. Making certain that each salesperson has a solid grasp on the vast portfolio and its capabilities to help deli operators has been the primary push over the last several months. Egner relays that the education of the sales team has truly been a two-way street thus far.

Additionally, the management team has encouraged a culture of “building bridges,” whereby sales team members should feel comfortable in reaching out to others for product knowledge, background and insights.

“We pick up the phone and talk to each other, or see each other in face-to-face conversations, which we think are super important,” says Jennifer Johnson, director of business optimization, Deli Solutions. “The biggest challenge is simply the time it takes to have everyone understand all the details, but the biggest reward is watching everyone work together and truly go as one team toward one goal.”

Despite the outward appearance in the sales and marketing strategies, and the integration of the company into the Hormel Foods family, the industry should not make the mistake of thinking Hormel Foods will be imposing its ways upon the Columbus Craft Meats R&D or operations.

“We have to keep everything that’s special about each of these brands and make sure they remain unique,” explains Baker. In Columbus Craft Meats, Hormel Foods knew it was acquiring operations and products that were “world class,” but the biggest positive surprise thus far has been the quality, drive and dedication of the Columbus workforce.

“The fact that they don’t compromise on recipes or raw materials, whether it’s the wine they use in their salamis or some other specific ingredient, it’s an incredible story,” he says. “There’s a deliberate purpose to everything they do.”

Tom Widner, senior plant manager at Columbus’ Bayfront Plant in Hayward, applauds his team as well, stating that everyone in the plant knows exactly what they’re striving to attain: top-quality product, every single batch.

“We respect the idea of, and we follow, a ‘quality in, quality out’ mindset,” he says. “Our goal is: The salami they got a year ago should be the same as what they got today and get tomorrow; they should never waver when they see Columbus, it should be the same.”

Evan Inada, customer marketing manager for Columbus, points to that unflinching dedication to the legacy of the products as a tremendous positive for expansion of the brand.

“These are centuries-old recipes, still stylistically the same, with the same passion producing them — the time and care [the team uses] gives a completely different flavor,” he says. “That’s why, as we move [further east], we’re still picking up a lot of steam, … because they expect to see that kind of quality.”

As with any ownership change, Columbus employees have had to make some adjustments to their thought process in the past year, but Inada says the transition hasn’t been too challenging.

“Our self-esteem and our drive are really no different,” Inada explains. “We’re still trying to push forward and become that national brand that everybody recognizes as the best quality out there, [but] now that we’re part of Hormel Foods and have structure and stability, we can just focus on being as good as we possibly can,” he adds.

Becoming that nationally recognized brand by expanding distribution eastward, in fact, is an opportunity ripe for the picking for Columbus-branded products, says LaVallie.

“The good news is with Columbus, we currently have distribution at major retailers across the country,” she says. “Where we do have products on the East Coast we sell very well, but we see a huge opportunity to … expand distribution on our core items.”

Success hinges upon the quality and legacy of the brand, Baker says, with which Hormel Foods has zero intention to interfere or modify. Realistically, Hormel Foods would be expected to use some of its capital as a much larger company to bolster the Columbus brand through investments in quality.

The Hayward plant’s most recent expansion, completed in September 2017 prior to the Hormel Foods acquisition, was a major product-quality play. That addition included a robotic rack handling system and numerous large drying rooms, which, according to various news reports, increased salami production by as much as 30 percent. More importantly, the system complements the quality of the product created on the front end of the process, Baker explains.

“The robots that move the racks of salami are important to quality because in every room, your product may dry at a different speed,” he explains. “These robots go on missions to pick up racks they know are drying faster or slower and move it to another room or a different spot in that same room.”

The Columbus team might not be accustomed to those types of investments happening frequently, based on its previous ownership, but the Hormel Foods’ team is ready to assist them in building the Columbus brand even bigger. Whereas the short-term thinking of private-equity ownership often left Columbus Craft Meats sprinting for success, the Hormel Foods Deli Solutions group will allow the Columbus team to pace itself to more sustained success.

“The difference is we’re managing the brand for the long-term, and that will drive continued success,” Baker says.  NP

Hormel and Applegate: Gateway to greatness

One person killed in stabbing at pork plant

Check out the February 2021 edition of The National Provisioner, featuring the 2021 Seafood Report, Meat Science Review, freezing and chilling technologies, packaging trends and much more!