Good guidance and a knack for new products has made Tulare Meat Locker a champion cured meats company.

The American Cured Meat Championships, held every year at the American Association of Meat Processors (AAMP) Convention, brings together some of the top cured meats experts in the country. Many of these companies are multi-generation family businesses, with know-how and recipes that have been passed down from one owner to the next.

Several years ago, a new company, located in Tulare, Calif., started picking up awards at the ACMC. Contestants may have wondered who this newcomer was. They soon discovered that Danny Mendes, owner of Tulare Meat Locker & Sausage Co. LLC, may be a relatively new name in the cured meats world, but he has a thorough meat background and a strong desire to succeed.

“It is very rewarding,” Mendes says of the recognition his shop has received in state and local competitions. “I’m a perfectionist, so I’d like to be the best at what I do.”

Turning a custom slaughter operation into one of Central Valley’s premier purveyors of sausages, bacon and other cured specialties has taken many hours and a substantial financial risk. The gamble has paid off, though. At the 2019 ACMC, Tulare Meat Locker was named the Grand Champion in the Meat Snack Sticks—Flavored category and Reserve Grand Champion in the Hot Link category. The company also picked up multiple Grand Champion awards at the 2020 California Association of Meat Processors (CAMP) annual convention, held earlier this year.

Mendes is the third owner of Tulare Meat Locker, which has existed since 1976. Originally named Tulare Meat Locker Service, it was started by a man and his brother-in-law, who operated the business for less than a year before selling it to a husband and wife. The couple owned it for several years and gave Mendes his start in the business.

“I was born and raised five blocks from here. First generation Portuguese-American,” Mendes said. “I started here when I was in high school. I was the clean-up boy, and I was here right up until I graduated. I really enjoyed it. I always liked to cook; the Portuguese are always doing something with cooking. So I got to learn the ins and outs of custom butchering.” 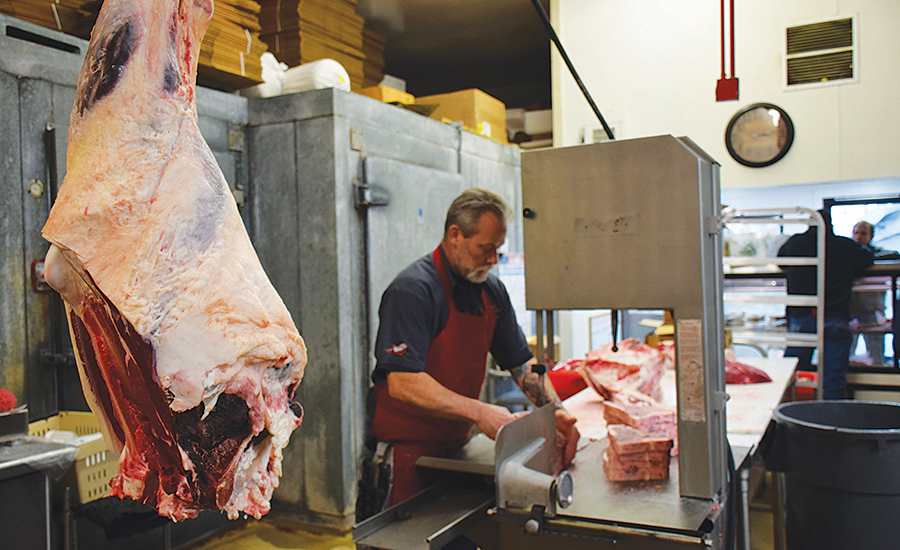 At the time, Tulare Meat Locker focused on custom butchering, with some curing for customers who wanted ham or bacon from their hogs. Retail was not a focus of the business. After graduating from high school, Mendes was unable to get a full-time job at the locker, so he had to move on.

“I was 20 at the time, and I was the oldest of four children. I wanted to set a good example for my sister and my brothers, so I went to the Bay Area,” Mendes explains. “I became a union ironworker, building hi-rises. I had bought a house, I was running 10 guys, I had a company truck.”

Around 2003, Mendes got a call from his former employer. They were looking to sell Tulare Meat Locker, and they asked him if he wanted to take over the business. He left his job and the Bay Area and returned home to get back into the meat business. Initially, he kept the company’s business model the same for a time, sticking with the custom butchering and fresh meat.

“It’s something I always wanted to get into,” he said of further processed items like snack sticks, sausages and summer sausage. 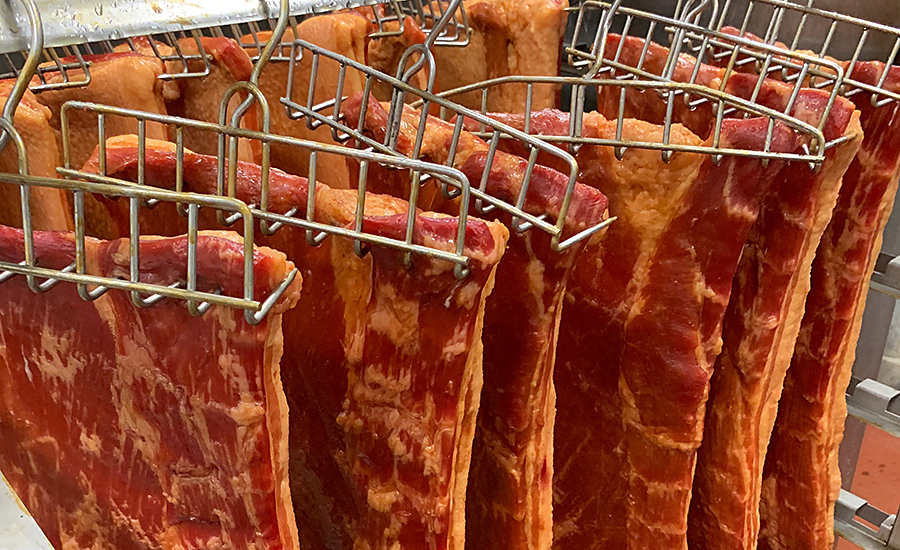 Mendes got his chance to add further processing to his company’s abilities when he decided to start making a traditional Portuguese sausage called linguiҫa. He thought it would be a good seller among the large Portuguese population of the Central Valley. He and his brothers built an addition onto the building to act as a sausage kitchen around 2014. Mendes then changed the name of the company to Tulare Meat Locker & Sausage Co.

“But I didn’t have the right equipment at all,” Mendes notes.

Mendes started making connections to the small processor community in the country, first through CAMP and then AAMP. A friend got him in touch with David Dewey, owner of Chico Locker and CAMP president. Dewey invited him to visit his facility to show him how things like sausages, jerky and snack sticks were made.

“It’s always good to get a visual, right?” Mendes points out. “I went up there for a weekend and was so overwhelmed!”

Mendes then met with Jon Frohling, then owner of Frohling Meats in South Dakota. Frohling gave him the basics on how to operate a smokehouse, and they made the first batch of linguiҫa at his plant. Mendes ended up with a sausage kitchen full of the necessary equipment and a popular new product for his customers. He also had the cured meats bug. 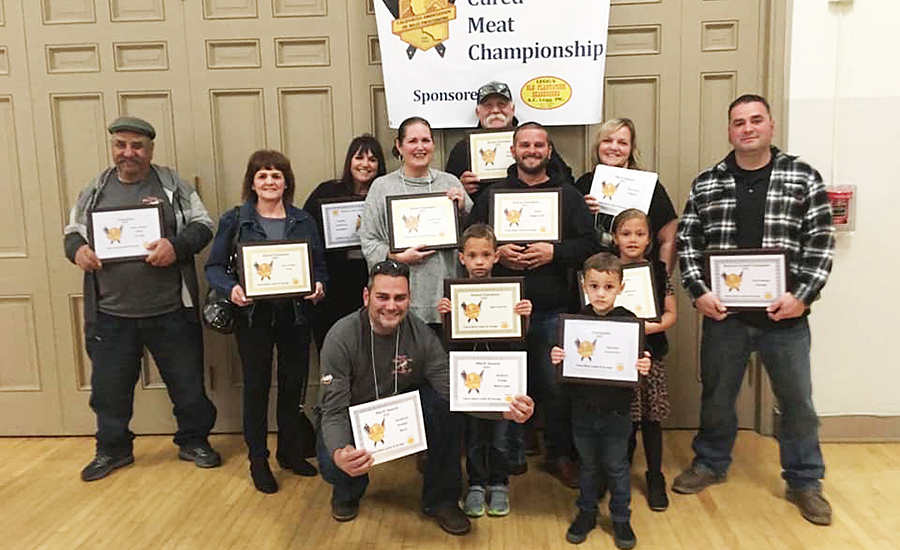 Mendes and his family show some of the awards the company won at a California Association of Meat Processors Convention.

Tulare Meat Locker has a small retail area – a planned expansion is going to grow it substantially, but the company can pack many products into a small space. Among its many popular flavors of sausage, Mendes has created a mango habañero and a Doritos bean dip flavors.

“I do a mac & cheese one, and I can’t even keep it in stock. I cook the elbows and put the cheese in, and kids love them,” he adds.

Mendes makes many Portuguese favorites for his community, and he keeps playing with those products as well. He had the idea of forming a linguiҫa like a pork belly and slicing it thin. His linguiҫa bacon has become quite popular among his customers.

Initially, Mendes was a little hesitant to get involved with cured meat competitions. But since he has made the leap into competitions, he has covered the available wall space in his shop with plaques. He has also become friends with many of the other ACMC competitors. At this year’s CAMP convention, Mendes was asked to judge some of the categories along with his friends Frohling and Rick Reams, AAMP President. He has also joined the AAMP Board of Directors and has become an advocate for small meat processors to get involved with their state or national associations.

“The networking that you can get is unbelievable. Competing, you get to see new ideas, and it makes you want to get better,” he says.

Competition has also helped him discover some new products. The first year that the ACMC had a Hot Link category, Mendes decided to enter it. He had never made a hot link before, didn’t know if the California version of “hot” would be too hot and wasn’t used to steam cooking or working with the red collagen casings. Tulare Meat Locker won Grand Champion in the category. Mendes said he was so shocked that he almost couldn’t get out of his season to accept the award. The convention was in Kansas City that year, and Tulare Meat Locker soon debuted the Kansas City Hot Link at its retail store. 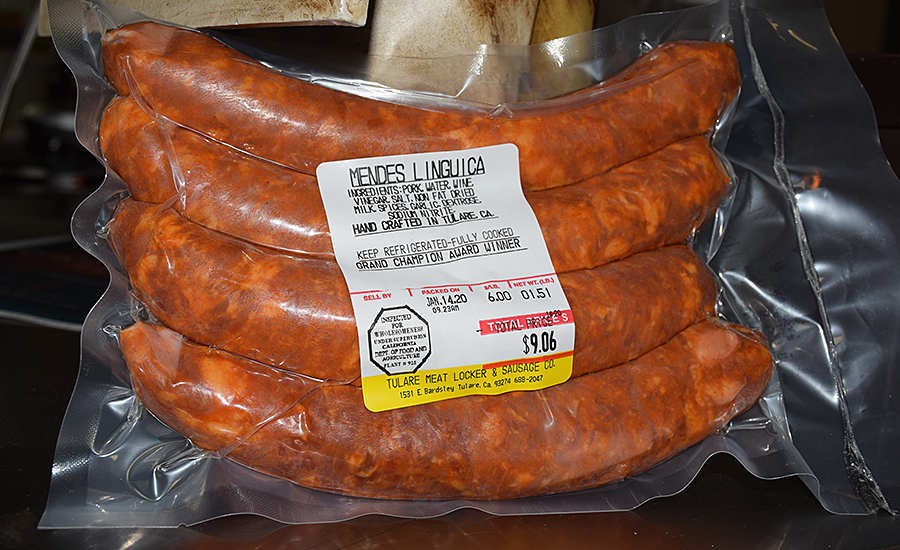 “It’s got a good ring to it, even though there are no hot links in Kansas City. People around here don’t know that, though,” he jokes.

Tulare Meat Locker remains a family business. His brothers, who helped him at the onset, have gone on to other careers, though they are mechanically inclined and help with plant maintenance. His father-in-law, Paul Richmond, retired from Kraft and came to work in the shop as Mendes; right-hand man. There are six employees in the business, but they produce a massive amount of output. The company continues its custom butchering business, and it also is a popular destination for many hunters for wild game.

When Mendes decided to expand Tulare Meat Locker into something new, the financial investment came with quite a risk. Snack sticks and bratwurst may be very popular in the Midwest, but he was taking it on faith that his customers in the Valley would respond.

“I’m glad it took off. I pretty much maxed out every credit source that I could to build this room (the sausage kitchen),” he explains. “A lot of hours are spent here. There’s no starting time and no stop time. It’s a minimum 12 hours every day to make it work.”

Now that he and his team of employees have made Tulare Meat Locker a nationally recognized success, the next step is to continue the growth. Mendes is planning into expanding into the adjacent lot, which will give him more coolers, more processing room and, most importantly, more retail spaces.

“People are always bugging me about specialty seafood items, like halibuts and crab legs, and I have a good source for that, but I just don’t have the space,” he says. “I want 20 meat cases. I have ideas for fresh, marinated stuff, just to show off more of my product.” IP