When consumers and students ask questions about the realities of chicken farming, Perdue Farms invites them to educate themselves on group tours at their new Poultry Learning Center facilities on active family farms in its network.

Although farm tours and transparency are not new concepts, Perdue Farms has taken them to another level by opening and supporting the construction of Poultry Learning Centers by its farmers, allowing everyone from students to consumers the opportunity to see the realities of chicken farming.

This fall, Andy Hanacek, editor-in-chief of The National Provisioner, visited Perdue’s newest Poultry Learning Center at S&N Enterprises, LLC — a Pinetops, N.C, family farm — and interviewed second-generation poultry farmer and S&N owner Steven Brake, as well as Mike Levengood, Vice President, Chief Animal Care Officer and Farmer Relationship Advocate for Perdue Farms. Brake has been raising chickens for Perdue since 1995, and his father had grown chickens for Perdue for nearly three decades. What follows is a portion of their conversation:

Hanacek: When and why did Perdue Farms decide to create a more formal, more tangible, more inviting approach to tours of its chicken farms through the creation of these Poultry Learning Center locations?

Levengood: Our Animal Care vision has four pillars, which are the chickens, the farmers, transparency, and continuous improvement. The viewing farms fit into our Transparency pillar: Who better than the farmers to go and open their gates and let people in to see what really happens on the farm?

The very first one was a young couple that attended Oklahoma State and came back to farm in Kentucky. They had a vision to let people see what they did on the farm, while also building an educational building where they could host cooking classes and other events. They raised the money to build a separate building for education along with a viewing room attached to the chicken house with four windows.

A second farm family of ours, from Georgia, picked up on it when they met the first family to do this at our Animal Care Summit, and they took it to the next level. They decided that when they had people visit the farm to see the crops and their cattle, they wanted to include the chicken houses in the tour because it's part of the whole farm experience. These farmers decided to do a little bit more in educating groups that visit about farm life, so they added to-scale examples of the house-management equipment into the viewing room. 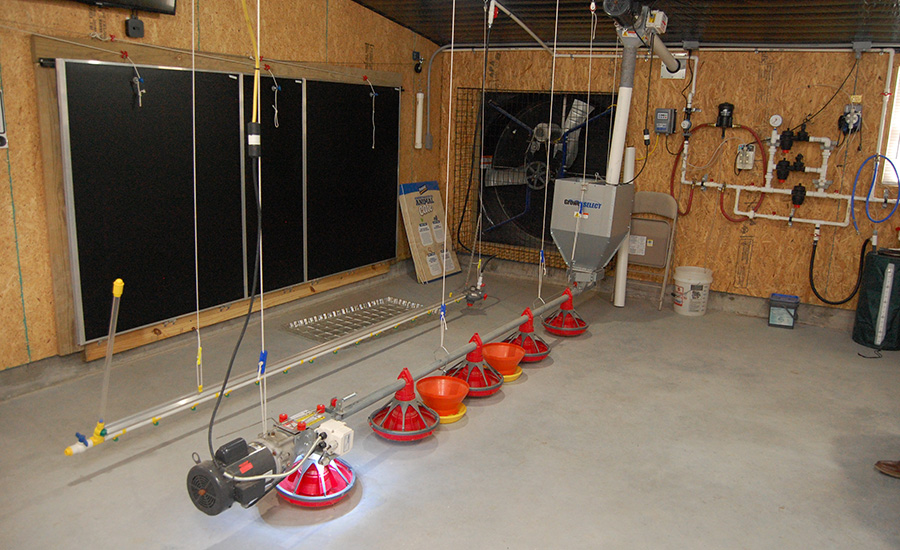 Hanacek: Steven, how did you decide to get involved and build your viewing farm facility here in Pinetops?

Brake: We came back from one of Perdue’s Animal Care Summits and thought about the viewing farm concept as something we'd like to do. We talked to Tommy Herring, the owner of Hog Slat, and said we were interested in this, and he offered to donate the materials and labor to build it.

Our tours actually started with a middle school, who brought out members of a garden club. At that point, the tour just had the chicken houses. We then figured we'd get a lot more impact if we bring in the groups instead of individuals, and just make a bigger impact among more people in that amount of time. There has been more interest from animal science programs, poultry science programs, FFA groups, Boy Scouts and Girl Scouts. But it has been good.

We built the center, had tours lined up, and then COVID hit. A few private, small groups were able to come, but we had an open house event scheduled that needed to be postponed, and other groups had to cancel too. But that may have been a blessing, because we sat back and did some thinking about the program.

Levengood: Steven’s sister, Vickie, is a schoolteacher, and she got involved at that time, writing a STEM program for the Poultry Learning Center here for each grade level, which is available on their Web site. It gives teachers materials that they can look at and use ahead of time, and make it more than just a field trip. It can be truly educational.

Brake: For example, we had a group of students from the University of Mount Olive recently, a group who will earn an associate degree in agriculture when they graduate from high school. When they go back to class, they consider all that they learned here at the Viewing Farm in the lab. They get a test on it that counts for a major part of their grade. It’s being used as a part of the curriculum because of how it was designed. It's a lot of fun to be able to say the science here relates to real life. It's just not an abstract concept. We're doing physics, we're doing statistics, we're doing the mathematics, and we’re doing different types of chemistry.

Getting back to the timeline, we decided we needed a logo and had a competition for high school art students in the area. The winner was a 9th grade student at a high school in Wilson, who hand-drew the logo. And that's the one we chose.

So, we started making those connections and sending out the information on the open house, which moved to August 2021. We started to get responses, and there's been a lot of interest. The whole thing just kind of developed after that. 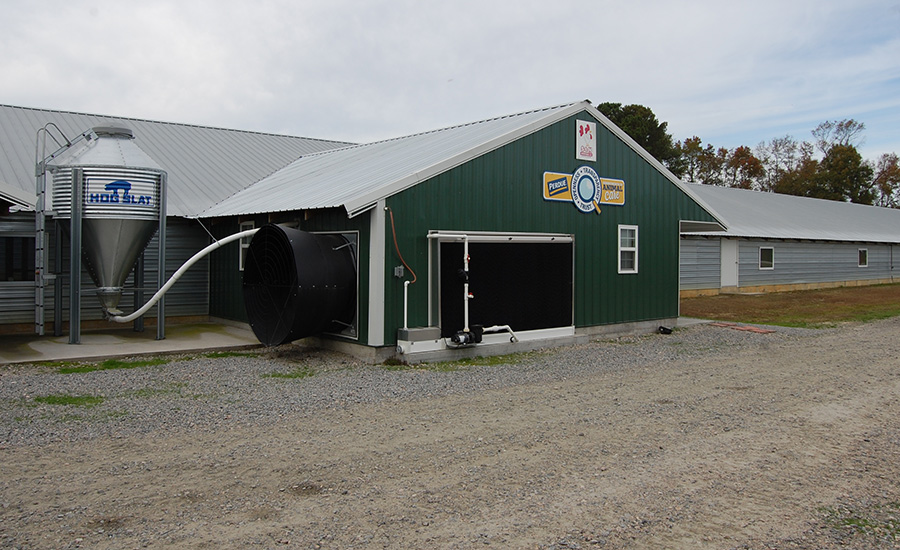 Hanacek: Do you have a wide variety of groups that come in, and how do they react differently to the different displays you have, from the windows into the house where they can see the chickens to the working equipment you have in the room as well?

Brake: Some groups are really quiet. But some groups, you just can't get them to stop asking questions. The groups of pre-veterinary students are really, really ambitious and want to get in there, talk to you and really get hands-on into things. The engineering students want to get more into the physics of how things work. The FFA students just want to look and experience it. And then, on the other side of it, we’ve had a preschool out here, and all they wanted to do is sit in the room and hold baby chickens.

Hanacek: Among the visitors that are more experienced or knowledgeable about farming and agriculture, what's typically the most surprising thing or most impressive thing to them when they come out here?

Brake: They’re impressed that what they see on the Internet in relation to who we are, isn't true. We can give birds access to outside. They can be free range so they're not packed in. And even when they go inside the house, they're surprised that the birds aren't packed in there. They're comfortable, and the house is clean. 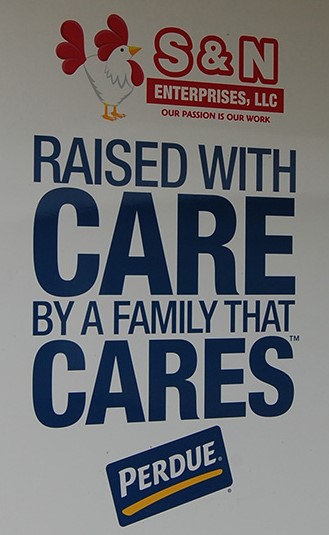 Hanacek: Do you get the same reaction from the, let's call them “city slickers,” who have never been on a farm?

Brake: We've had bus drivers who drive the students here and get off the bus, and they just have absolutely no idea what they were walking into. They ask, “What do you do with all of these chickens? What do you need all of this for?” So then, that starts into the conversation. So, if we can make that impact here — I don't want to use the old cliché — but we may be throwing a pebble in the pond, and that's exactly what we're trying to do.

Hanacek: Have you had any negative reactions from visitors?

Levengood: One day, a visitor from an animal welfare group told me, “I’ll give you 10 minutes in the house,” which I was fine to accommodate that. After 45 minutes in the chicken house, she apologized, because she had built up a big negative perception of what it must be like, and it was not as she expected. I have to say that's 99 percent of the visitors. Typically, the most negative reactions we’ve seen aren’t even that negative, but they come from members of the animal activist groups who are really determined to believe that this is not what we should be doing.

Brake: But I've had some skeptics. Some have said, “You just got this house ready for tours but I’ll bet the other ones ... .” I tell them they can pick any building on this farm, and I'll take them to it to see the same thing.

Hanacek: Do you cover other aspects of the farm or life in agriculture during the tours, or are you typically focused on the chickens and their lives in the chicken houses?

Levengood: In that two-year span from when Steven built the Viewing Farm to when we did the open house, Steven added the mortality management process as part of the tour as well.

Brake: Correct, we applied for a grant from the [USDA National Resources Conservation Service] for forced-air composting, for a project that we completed in June, and added a new dry stack. That allows us to not only go through the chicken house and the processes in there, but also to talk about nutrient management, soil, how our waste management plans work, and how we're handling the mortality on the farm.

On that part of the tour, I'll actually reach down and pick up the compost, and I tell them that this is what happens with birds that die on the farm — they’re processed into a carbon-based product with 4-6% nitrogen that will fertilize the soil and grow the food we eat.

Then, we also talk about the regulations we must meet, how we get inspected, how NRCS is on the farm. We explain to them that if we don't do what we're supposed to do, there are consequences to our inaction or not doing things correctly. We don't just talk about the chickens — we talk about the entire process. And the goal is, for me at least: I might not be able to change the world perception of agriculture and chicken farming, but I'm going to try to improve my corner of the world.