Saturated fatty acids (SFA) are more stable than unsaturated ones; however, during cooking at 150°C or above — such as on the surface of grilled steaks — SFA are oxidized in a more complex pattern, yielding long-chain alkanes, alkanals, ketones, and lactones (Nawar, 1984). This shift in volatile composition with less short-chain and unsaturated aldehydes and alcohols yields more desirable aromas, less volatility, and higher thresholds. Although thermal oxidation of lipids occurs at as low as 60°C, the desirable composition of lipid-derived volatiles is produced at temperatures from 100°C to 300°C (Wasserman, 1972) due to the rapid oxidation of unsaturated fatty acids and other oxidation products. Lipid oxidation products also interact with Maillard reaction products, which are formed when proteins begin to unfold at an internal temperature of 35°C and coagulate from 55°C to 80°C (Wasserman, 1972). When the meat surface is roasted at 190°C and fatty acids are thermally oxidized and polymerized, milder Maillard reactions occur at an internal temperature of 60°C to 80°C (Wasserman, 1972), in which lipid-derived aldehydes are active participants, yielding some of the most characteristic volatiles of cooked meat aroma. 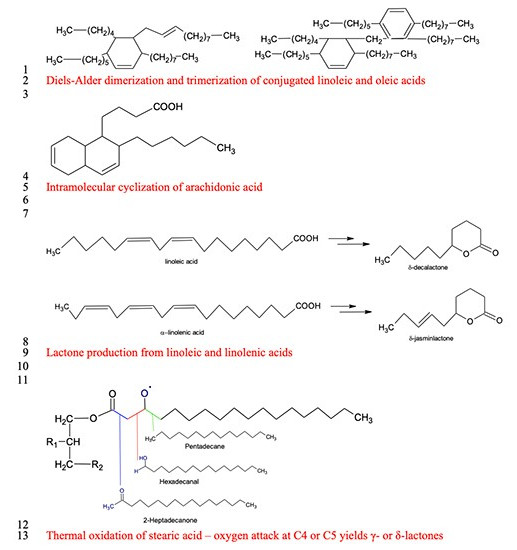 It has traditionally been accepted that lipids are the source of characteristic flavors in meat (Hornstein and Crowe, 1960), through the formation of saturated and unsaturated aldehydes with 6 to 10 carbons. However, lipid volatile compounds have greater thresholds than volatiles derived from water-soluble compounds such as those participating in Maillard reactions (Mottram, 1998). Moreover, the interactions between lipid-derived compounds and Maillard compounds are more important for the development of meat flavor than originally thought. Legako et al. (2016) reported that USDA Standard steaks produced more n-aldehydes than USDA Prime and Low-Choice steaks.

Although the percentage of polyunsaturated fatty acids (PUFA) in leaner meat is greater than that in fattier meat because of less total lipid content, Legako et al. (2015) reported that the PUFA content in USDA Standard steaks was still less than that in USDA Prime and Low-Choice steaks. Therefore, the development of lipid flavor compounds must also be influenced by the lean portion of meat, especially the water-soluble components. Lipid oxidation products that participate in Maillard reactions are most likely aldehydes that compete with carbonyls from reducing sugars for amino compounds (Zamora and Hidalgo, 2011). This competition produces characteristic and desirable flavor compounds in cooked meat (Zamora and Hidalgo, 2011; Kosowska et al., 2017).

Gardner and Legako (2018) found that dimethyl- and trimethyl pyrazine concentrations in the headspace of ground beef were greater at higher temperatures. Their data indicated that such an increase was more prevalent in USDA Prime beef than in USDA Choice and Standard. USDA Prime beef has more fat, and these pyrazines are products of lipid–Maillard interactions. These findings imply that fatty acid oxidation products are not simply flavor compounds; they are also precursors for complex interactions with Maillard products to form a more characteristic and desirable cooked meat flavor. Such interactions do not occur in autoxidation during the storage of meats.

During refrigerated storage at 1°C to 7°C, lipid oxidation occurs slowly with minimal interactions with other compounds such as Maillard products and yields various off-odor compounds that are detrimental to meat quality. The heat used in cooking accelerates lipid oxidation but also produces a desirable profile of lipid carbonyls and carboxylic acids for cooked meat flavor and facilitates the hydrolysis of fatty acids from triglycerides or phospholipids. This hydrolysis allows fatty acids to be more reactive and produce carbonyls more quickly (Wasserman, 1972). At lower storage temperatures, autoxidation of meat produces short-chain aldehydes and alcohols that have offensive odors (Ismail et al., 2008). Although aldehydes from the Maillard reactions such as 2,3-butanedione (Hunt et al., 2016) are desirable, major aldehydes from the autoxidation of meat lipids such as hexanal are undesirable.

Another phenomenon called “warmed-over,” coined first by Younathan and Watts (1959), describes the rancidity onset of cooked meat after a refrigeration period. The warmed-over flavor is caused by the continuous oxidation of lipids after cooking. Angelo et al. (1987) reported that warmed-over flavor was characterized by hexanal and 2,3‐octanedione, both of which are products of lipid oxidation. Studies in beef and pork have consistently identified these two compounds as warmed-over flavor markers. However, other lipid thermal oxidation products such as cyclic compounds are also oxidized and decomposed to offensive aromas during cooked meat storage.

Volatile compounds from autoxidation of unsaturated fatty acids causes off-odors, whereas the lipid-derived volatile profile is more desirable under thermal oxidation and in the reactions with flavor compounds such as Maillard reaction products. Recent research has suggested that the development of lipid flavor compounds is influenced by the lean portion of meat. Therefore, the interactions between lipid-derived compounds, water-soluble compounds, and Maillard compounds are likely more important than originally thought and warrant further research. 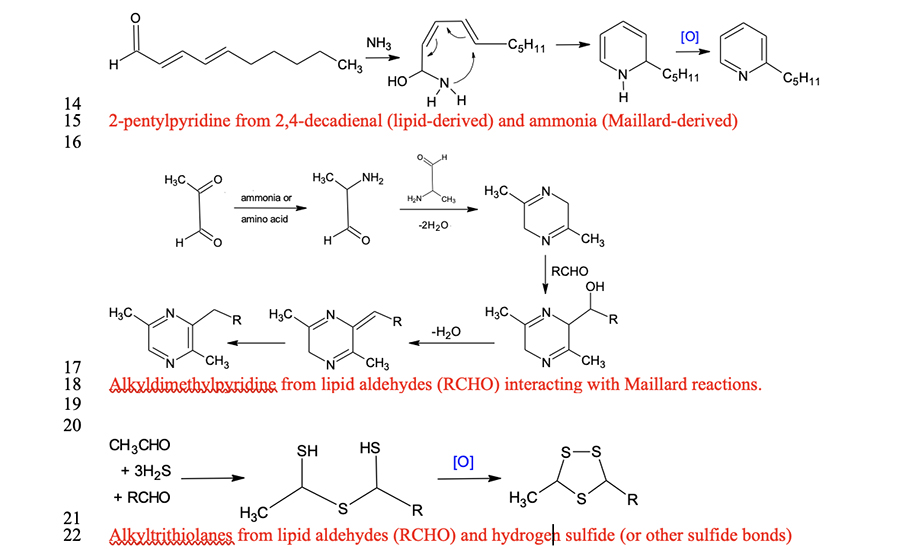 The chemistry of peracetic acid

Reducing pathogenic bacteria from animals during the harvesting process