Animal fat includes subcutaneous, intermuscular, and intramuscular (marbling) adipose tissues (Rhee et al., 2000), containing mostly triglycerides (neutral lipids) and a small amount of phospholipids (polar lipids). In lean meat, phospholipids account for up to one-third of marbling. Fatty acids in meats are unbranched and have an even number of carbons from 4 to 24, although 12 to 24 is the most common (Voet et al., 2006). However, some branched or odd-numbered fatty acids can be found in ruminant fat (Lobb and Chow, 2000). Lamb has up to 3% volatile branched-chain fatty acids (Bravo-Lamas et al., 2018), contributing to characteristic lamb and mutton odors. Longer branched-chain fatty acids in beef do not contribute to flavor. 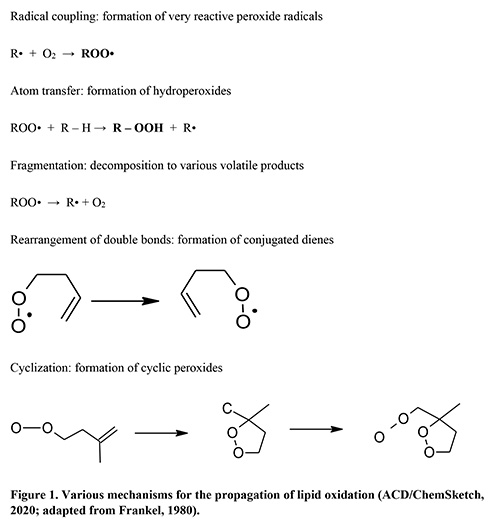 Thermal oxidation of lipids occurs through similar mechanisms and produces the same classes of compounds as autoxidation (Choe and Min, 2007). Although it can occur at as low as 60°C, the desirable composition of lipid-derived volatiles is produced at a temperature from 100°C up to 300°C (Wasserman, 1972) because these conditions create more lactones, alcohols, ketones, and short-chain fatty acids. High temperature and available oxygen during cooking drive volatile composition to a more desirable direction with rapid and further oxidation to organic acids and esters (Choe and Min, 2007; Song et al., 2011), greater polymerization of unsaturated fatty acids and lipid peroxides to produce fewer volatile products, and degradation of SFA to long-chain alkanes, aldehydes, and lactones (Nawar, 1984), especially at 150°C or above - such as on the surface of grilled steaks (Figure 9). However, lipid thermal oxidation products such as cyclic compounds and fatty acid dimers are also decomposed to offensive aromas during storage.

As fatty acids on the surface of roasted meat are oxidized extensively at 190°C, milder Maillard reactions occur at an internal temperature of 60°C to 80°C (Wasserman, 1972), in which lipid-derived aldehydes are active participants, yielding some of the most characteristic volatiles of cooked meat aroma. Many short-chain aldehydes and ketones are also removed by the steam during cooking, decomposed under high temperature, and react with Maillard reaction products, to produce more desirable volatile compounds with much lower thresholds. 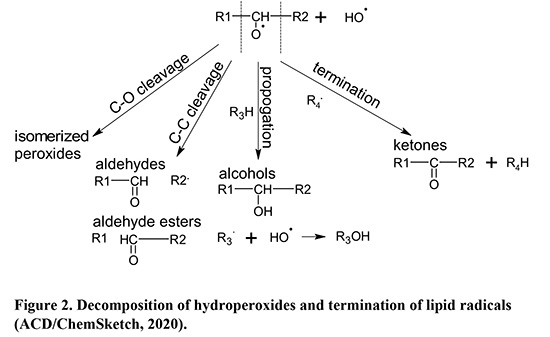 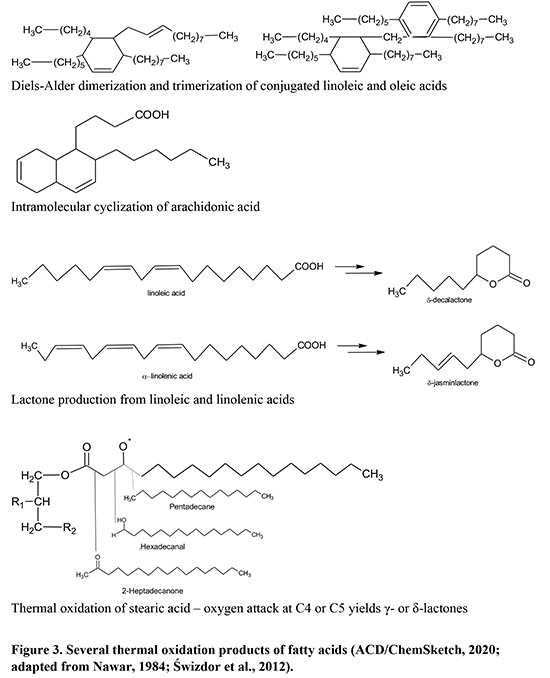 Lipid-Maillard interactions were recognized early in meat flavor chemistry research as pathways to produce some of the key flavor compounds in cooked meat. Fat extract from pork tissues with chloroform and methanol developed species-specific meat flavor after heating but such flavor notes diminished after the extract was washed with water (Wasserman and Spinelli, 1972), leaving only a “piggy” note identified as 5,α-androst-16-en-3-one, the boar odor dissolved in pork fat. Pippen and Mecchi (1969) similarly demonstrated that lipids from chicken adipose tissues had no chicken aroma after removing polar compounds by water washing. Sanderson et al. (1966) also reported that heating beef fat with beef lean yielded much more flavor carbonyls than only beef fat. Myers et al. (2009) suggested that beef and pork lean was more important for species-specific flavor, although fat level affected flavor intensity. Some lamb-specific flavors also come from lipid-Maillard interaction products such as alkylthiazoles, alkylpyrazines, and alkylpyridines (Mottram, 1998). Lipid oxidation products such as aldehydes compete for amino compounds with carbonyls derived from reducing sugars (Zamora and Hidalgo, 2011). Alkyldimethylpyrazines and alkyltrithiolanes are formed as lipid-derived aldehydes enter Maillard reactions with either pyrazines or hydrogen sulfide, respectively (Figure 10). Lipid aldehydes and ammonia, a byproduct of Maillard reactions, form 2-pentylpyridine (Figure 10), which recently was reported to produce various characteristic and desirable flavor compounds in cooked meat (Kosowska et al., 2017). Lipid-Maillard interactions occur at a greater intensity at higher internal temperatures above 66°C (Myer et al., 2009) and in fattier meat because of the availability of lipid oxidation precursors (Gardner and Legako, 2018). Fatty acid oxidation products are not simply aromatic compounds; they are also precursors for complex interactions with Maillard products to form a more characteristic and desirable cooked meat aroma. Such interactions do not occur in autoxidation during the storage of meats. 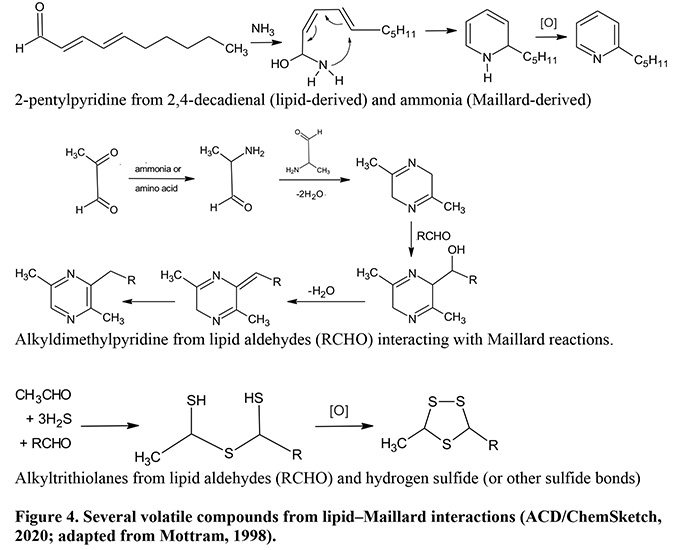 Volatile compounds from autoxidation of unsaturated fatty acids causes off-odors, whereas the lipid-derived volatile profile is more desirable under thermal oxidation and in the reactions with Maillard reaction products. Recent research has suggested that the development of lipid flavor compounds is influenced by the lean portion of meat. Therefore, the interactions between lipid-derived compounds, water-soluble compounds, and Maillard compounds are likely more important than originally thought and warrant further research.