An entrepreneurial instinct helps a Georgia business find an audience for its high-end charcuterie products.

When Laura Jensen and her family moved from the suburbs to a small farm in Loganville, Ga., the goal was to buy some horses, raise some chickens and reconnect with her rural roots. She did not expect to help preserve an endangered breed of hogs, learn to make charcuterie, and feed the local population when the grocery stores ran out of meat in the pandemic. But change happens, and you can either run from it or embrace it. She embraced the change, and as a result, Jensen Reserve has become one of the hottest small processors in Georgia. Instead of housing horses, the barn on the property has evolved into a country store and a processing room.

“We had actually bought four horses for four people, but then we had other plans,” Jensen says. Those other plans continue to evolve as the Jensens find new opportunities. Though they are mechanics by trade and not butchers, Laura and Bill Jensen are entrepreneurs, problem-solvers, and foodies. That combination of skills helped them learn how to break down a hog carcass and develop a charcuterie program – from YouTube videos. 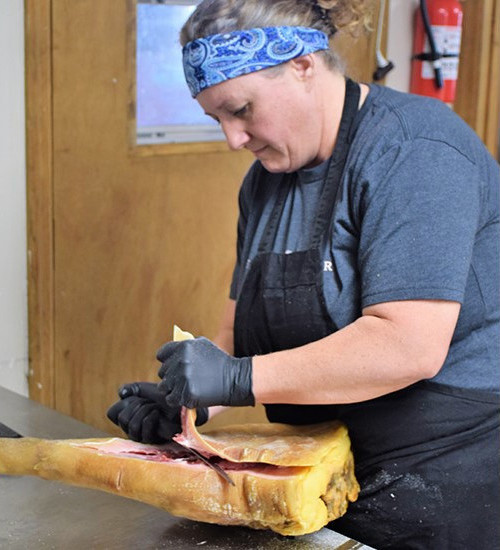 Laura Jensen, who comes from a mechanical background, figured out that the easiest way to remove the tough, thick Meishan skin was with a Dremel tool.

“I'm all self-taught. When we started this, we literally turned on YouTube videos and taught ourselves to break down carcasses, and we kept doing that. We even learned how to make sausages. I had to just get a stuffer, get it down here and get whacked in the head by the handle a few times,” she says, laughing.

“My husband, I call him Mr. Science. He can figure out the science behind all of it. He just went through a whole bunch of research papers and absorbed everything you can find out there, and then I did everything else,” Jensen adds.

One of the things that makes Jensen Reserve stand out is its fine charcuterie products, made from Meishan pork that the family raises on their farm. The breed, which originated in China, is one of the oldest breeds of domesticated hogs in the world. It’s also one of the most endangered, as swine flu has greatly reduced the breed’s numbers in China.

“I house the remaining foundation herd from North America here,” says Jensen, who also is the president of the American Meishan Breeders Association and runs Meishan Preservation. “What we do in my work with the Meishan is defining its future, because there are very few left in China now. Essentially, what we have here in our registered population is the future of the breed.” 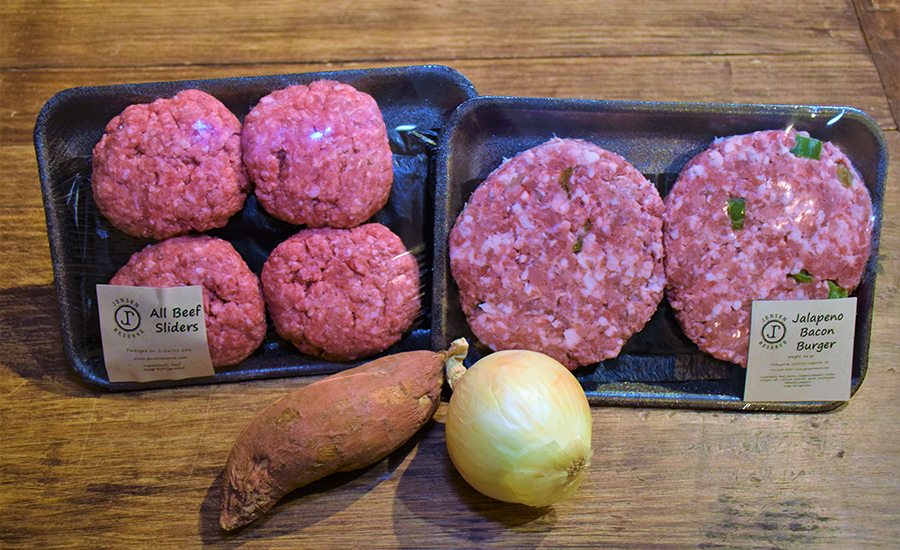 Jensen’s involvement with the breed came by accident. After buying some chickens, she wanted to add some larger livestock to the farm. There wasn’t enough land for cattle, so they decided on hogs. The Duroc hogs that they brought in, though, were destructive and killed some of their chickens.

“Once you have pastured pork, you can't go back. It's an entirely different animal, literally, than anything you get in the store,” she says. “So once we have these problems with the large breed hogs, I didn't want to give it up. I wanted to find something that worked.”

Through a connection with another area farmer, Jensen was introduced to the Meishan, a kinder and gentler breed that also happen to yield delicious meat. When that farmer elected to retire in 2020, she ended up with the full herd.

While that was happening, Jensen Reserve was unexpectedly finding an audience. Jensen and her daughters had been selling eggs from their chickens, and as word of mouth spread on social media, more customers began asking about pork, too. That led to Jensen becoming a butcher, before she was able to connect with a processor in Ellijay, Ga., that could process the hogs and let her focus on the specialty meats.

The decision to get into the food business wasn’t made by happenstance. Jensen says that her family were experiencing some health problems that were alleviated from eating their farm-raised eggs. That discovery led her to look for ways to produce their own protein.

“We were undoubtedly food snobs, my husband and I, and we really like to experiment with different products, new products, and things that are on a higher level. Growing up on my grandfather's farm and raising our own beef cattle definitely gave me a different appreciation for food and different levels of it,” she said.

When she started getting her hogs processed, Jensen had to determine how to get the most from the carcass. She decided to start producing charcuterie and, again, devoured as much knowledge as she could glean from online sources. Soon, Jensen Reserve began producing prosciutto, pepperoni, capicola, and others. The company’s bresaola uses beef from the Midwest from farmers with similar values as Jensen Reserve. Along with the Meishan charcuterie products, Jensen Reserve has been introducing heritage pork charcuterie using Duroc pork raised by other farmers. 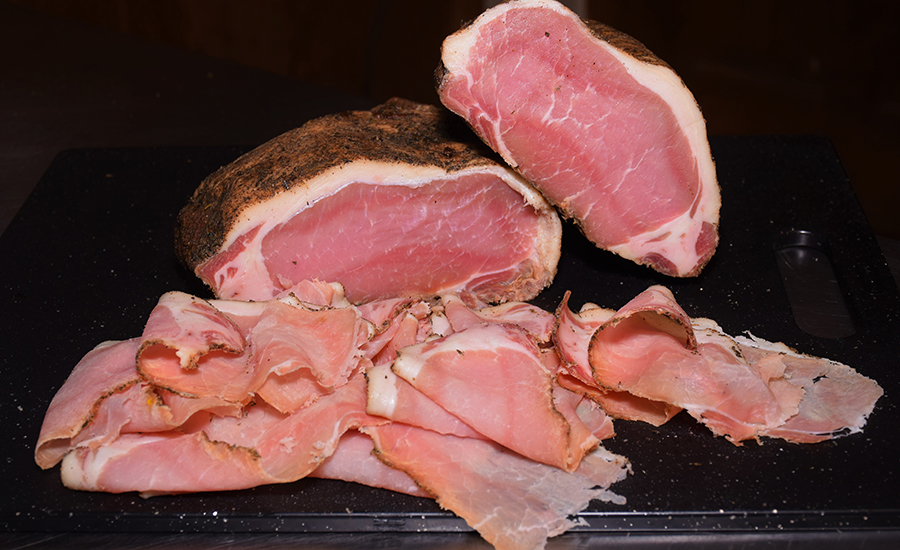 Another specialty is a cured pork loin that is sliced thin and sold as lunch meat. It is typically called a “lonzino,” but Jensen Reserve, which is owned, operated, and staffed by women, sells it as “lonzina.”

“I figured that since we’re an all-female deal that it could carry the “a” instead of the “o,” Jensen jokes.

Jensen Reserve, like so many other small processors, discovered an entirely new audience in the wake of the COVID-19 pandemic, when large grocery stores in the area ran out of meat. Jensen helped fill the demand, selling fresh meat out of a hole in the wall. Literally. Bill Jensen removed an air conditioner unit from the wall, and that hole became the point of sales for people who would line up to buy meat.

“My farm store in two weeks’ time grew 800%, because nobody could get meat elsewhere. So it was crazy to say the least,” she recalls.

The store has remained busy and now operates six days a week — up from two weekends a month pre-COVID. Shoppers come from as far as South Atlanta. Jensen Reserve is active on social media, and the company benefits from good word of mouth and local news coverage. Sales slipped somewhat as the grocery stores restocked, and Jensen tried things like shipping and home delivery. Those avenues proved to be too costly, but then she partnered with MarketWagon, which essentially operates as an online farmers market. Shoppers in the Atlanta area can order cured and fresh meats through the Jensen Reserve website, as well as products from other specialty Georgia companies. All delivered to their front door.

Once a week, the Jensen team gathers the orders that were placed via MarketWagon and delivers them to a distribution center, and MarketWagon takes care of the final delivery.

“They’re in 19 counties. And there's no way I can deliver to 19 counties with a $6.95 delivery fee,” Jensen says. MarketWagon has more than made up for the post-COVID sales decline. “We’re actually buying more equipment because of the growth,” she adds.

Jensen Reserve has about 20 full-time, part-time, and volunteer employees. There are numerous opportunities for the company to grow, and Jensen is deciding which are the most viable ones. The company could start wholesaling meats, and it could become federally inspected, though that would probably necessitate an additional location to get the processing away from the farm. She also wants to start educating other about charcuterie, so that future processors have an easier road to the market than she did.

“We'll just keep working and keep growing and figure out where we're supposed to be,” she says. “And we'll just have to see. There are a lot of grants and opportunities out there for female owned and operated businesses right now, and I think we need to pursue them.”

Jensen Reserve 2-28-22-104: Laura Jensen, who comes from a mechanical background, figured out that the easiest way to remove the tough, thick Meishan skin was with a Dremel tool.