Foodservice operators and retailers are offering breakfast proteins that are convenient and healthy — but at just the right price point.

Next year, on-the-go breakfast eaters will be able to ask for a waffle taco, A.M. Crunchwrap or Cinnabon delights at Taco Bell. Yes, a breakfast menu is being tested and rolled out at Taco Bell, of all places, which usually caters to day-parters and late-night snackers. The breakfast crowd is just too lucrative to pass up anymore.

And Taco Bell is balancing new, unique formulations, such as the waffle taco with eggs and a sausage patty in the middle, with proven winners like the Crunchwrap, and healthy options such as yogurt parfaits and oatmeal.

“It’s not for everyone,” says Elizabeth Friend, senior foodservice analyst, Euromonitor International, a Chicago-based market research firm. “But other restaurants should pay attention to Taco Bell’s model and offer something truly new and different to their customers.”

Breakfast is so important to foodservice today, especially to fast food, because they can’t rely on new growth to gain consumers anymore, she notes, so they are adding or changing their breakfast menu to convince largely habit-driven breakfast consumers to change their routine.

Chains such as Jack in the Box andMcDonald’s are adding breakfast to their menus outside of the breakfast rush, as well. Furthermore, in a developing trend, some foodservice operators are beginning to add breakfast flavors to non-breakfast foods, reports Chicago-based Technomic’s 2013 Breakfast Consumer Trend Report.

It’s not enough to simply offer breakfast choices today; they must be convenient, healthy, indulgent or special — a tall order — and at just the right price point.

So McDonald’s and Dunkin’ Donuts, for example, are launching steak-based sandwiches, egg white or cage-free egg sandwiches and high-protein veggie sandwiches and yogurt.

“There is a definite trend to increasing protein and ingredient quality,” says Friend. “In all of foodservice, we’re seeing a very apparent shift in how consumers define healthy, from low calories and sodium to good quality and fresh.”

So while convenience and price are important to consumers, they still want tasty, high-quality breakfast choices that carry a perceived health halo.

“Consumers want their breakfasts to be healthy in a way that means the most to them,” says Deanna Jordan, senior research analyst, Technomic, a research and consulting firm. “We’ve seen the definition of health evolve and this progressive definition clearly extends to the breakfast category.”

She points out that consumers are more interested today in made from scratch, real, homemade, premium and local assertions than traditional health claims such as low fat, low sodium and low carb.

“Still, in terms of traditional health claims, low in trans fat stands out as something consumers are willing to pay more for today,” says Jordan. “However, even low in trans fat is only on par with sustainable and cage-free. Not to mention, it’s important to keep in mind that taste will not be sacrificed for health.”

According to Walter Zuromski, president and culinary director, Chef Services Group Inc., based in Lincoln, R.I., health can be a limiting term to some operators, although it can lend a good perception to their business.

“Restaurants don’t want to define healthy items too much and be limited in what they can offer,” he says. “They would rather have consumers perceive that they carry lean, good-cholesterol items for their marketing strategy.”

He points out that fish, for one, is becoming more popular in breakfast entrees with younger consumers who want salmon or white fish with their eggs for their taste and health benefits. 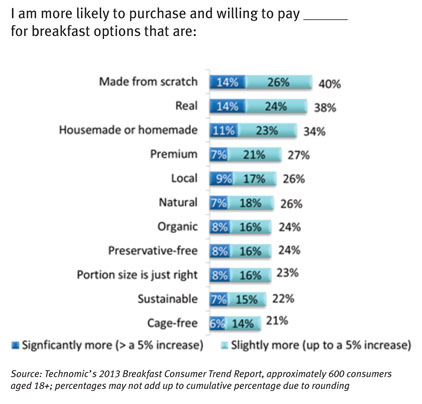 There was a time not too long ago that bacon would have been added to every breakfast option, but it’s not in as many promotions today as it was in 2011 and 2012, notes Friend.

“Bacon is still popular and a breakfast mainstay,” she says. “But bacon isn’t the be-all, end-all factor that it once was. That trend has run its course.”

According to Mintel’s September 2012 “Breakfast Foods – US” report, bacon did increase on breakfast dishes 19.1 percent from 2009 to 2012, during its hey-day. But at the same time, turkey bacon increased 233.3 percent and turkey sausage increased 138.1 percent, which shows healthy protein alternatives are increasingly popular with customers.

Mintel’s report, in fact, predicts that breakfast meats will become more popular at grocery through 2017, at least.

“Protein can play a variety of roles during the breakfast daypart,” says Jordan. “It’s being used to convey a premium, hearty positioning, such as with the Angus sandwiches recently introduced by both Dunkin’ and McDonald’s. Protein is also appealing to consumers’ search for a more healthful option [i.e., poultry-based proteins], which goes right along with its ability to appeal to a wide demographic with the use of such plant-based protein options for those with dietary restrictions.”

“Operators are walking this line of indulgence-versus-healthy because that’s exactly what the consumer does,” says Jordan. “I don’t think it’s a bad idea to at least have a traditionally healthy option. You’re pleasing those who truly want healthy breakfast fare, and you’re gaining credibility among the crowd who just wants the option available to them despite the fact that they never order it.”

At grocery, it is even easier to find healthy and portable proteins for breakfast.

“When it comes to a savory and satisfying breakfast, consumers recognize the importance of having a balanced breakfast that includes protein but often don’t want to sacrifice great taste for convenience,” says Amy Grabow, vice president marketing, Jimmy Dean.

She notes that in addition to convenience, Jimmy Dean is always looking to provide variety, poultry-based options, meatless choices and mini-meal items.

“Consumers want variety when it comes to choosing their breakfasts and are often looking to see whether the product delivers on nutrition, convenience and most importantly, great taste,” she says.

How a protein breakfast can improve satiety in the morning