Look, but don’t touch: indicators of unconsciousness in stunned livestock

When it comes to electrically stunned animals, processors can observe a variety of indicators to determine unconsciousness but should avoid using the corneal reflex. 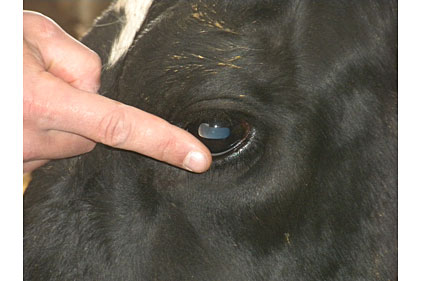 The corneal reflex has been one of the go-to indicators of unconsciousness in stunned livestock for decades. The ease of the procedure (a quick touch of the eye) and the seemingly discrete outcome (a blink) make it an ideal assessment tool, at least on the surface.

Starting in the early 1980s, European researchers began to consistently document the occurrence of corneal reflexes from electrically stunned hogs, calves and sheep. In one of the earliest studies, a head-to-back stun was applied with a current of 2.0 amperes for five seconds to 35 calves.

Sixty percent of the calves displayed a corneal reflex for an average of 59 seconds after they were stunned. None of the calves had a heart beat that was detectable with a stethoscope. In a later study  from the same research group, sheep and calves that lacked a detectable heart beat by stethoscope and by electrocardiogram never returned to consciousness. In the end, the authors concluded that corneal reflex may not be a good stand-alone indicator of consciousness for electrically stunned animals, and that detection of heart beat by stethoscope was a good indicator to include in the assessment of stunning efficacy. However, this idea may present some challenges.

Although it is not difficult to learn how to place a stethoscope on a stunned and shackled animal and listen for heart sounds, an understanding of how heart sounds are made reveals a flaw in the idea of monitoring for heart sounds. The characteristic thumping noise of the heart is made by sudden stoppage of blood flow as the heart valves open and close. The heart valves are opened and closed by changes in blood flow direction — in a similar way to the action of water in opening and closing check valves in some plumbing applications.

In a very simplistic sense, the heart sounds are sort of like the sounds of banging water pipes when a valve is shut off quickly. Only pipes that have water pressure will make noise when a valve is closed. If there is no water pressure or no water at all, the sudden change in pressure and associated noises cannot occur. The same goes for heart sounds. If the animal is bleeding out or has nearly completed the bleed out process, the intensity of the heart sounds may be difficult to detect with a stethoscope.

The second challenge with stethoscope use for cardiac-activity detection has to do with the practicality of following a moving carcass during bleed out while wearing a stethoscope and holding the stethoscope end against the appropriate place on the carcass.

To work around this challenge, some researchers have used handheld veterinary electrocardiograms that can record the electrical activity of the heart. With some modification, these devices can be hung on the carcass and retrieved at a later point in the exsanguination process. Although this procedure is impractical to perform on every animal, facilities that use electrical-stunning methods that are intended to induce cardiac arrest may find these devices to be very useful in verification of stunning efficacy for their Systematic Approach to Animal Welfare.

Starting in 2010, the American Meat Institute’s Animal Care and Handling Guidelines no longer recommended the use of corneal reflex for assessing unconsciousness of electrically-stunned animals. Instead, observation for natural blinking is encouraged between five and 60 seconds after the animal has been stunned. Any occurrence of natural blinking is considered an indication of return to consciousness.

The appropriate corrective action if natural blinking is observed is the application of an immediate secondary stun. The secondary stun does not have to be performed with the same method as the original stun. In many cases, application of a secondary electrical stun while the carcass is bleeding out could be very dangerous. Many large pork plants keep handheld captive bolt guns near their bleed out area for this reason.

The AMI Animal Care and Handling Guidelines also include rhythmic breathing, response to a painful stimulus, and righting reflex as acceptable indicators of return to consciousness. A simple way to test response to painful stimulus is to pinch the nose of the stunned animal with a small pair of needle-nose pliers. A pair of needle-nose pliers is a safer tool to use than a sharp object such as a needle or knife.

In practice, corneal reflex appears to be a dependable indicator of unconsciousness for animals that are stunned with a mechanical method, such as captive bolt or firearm. However, when it comes to electrically stunned animals, it does not appear to be the most trustworthy indicator.

If you need to assess the consciousness on electrically stunned animals, remember that it is better to just look at the eyes — but don’t touch them!

Kurt Vogel, Ph.D., is an associate professor in the Animal and Food Science Department at the University of Wisconsin-River Falls. He is also president of Vogel Livestock Solutions, a food animal welfare consulting company. If you have any questions or comments, contact Vogel by email: kurt.vogel@uwrf.edu or phone: (715) 425-4704.