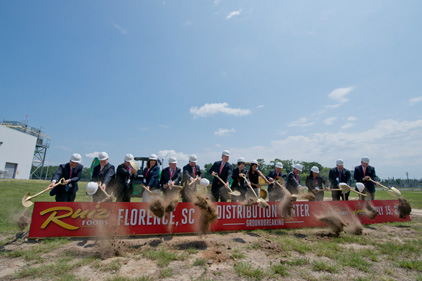 Andy Hanacek, editor-in-chief, attended the dedication and groundbreaking ceremony for Ruiz Foods’ Florence, S.C., processing facility, July 15, 2014. The frozen-foods processing plant, which originally opened under Heinz ownership in 2011, was recently acquired by Ruiz Foods in an effort to expand its manufacturing footprint eastward. Ruiz Foods currently processes its frozen Mexican food products in its two facilities in Dinuba, Calif., and Denison, Texas, shipping them nationwide from there. In the following videos, you can see an exclusive Q&A with Rachel Cullen, president and CEO of Ruiz Foods, discussing Ruiz Foods’ plans for the new facility, as well as unedited footage of remarks by Cullen, Kim Ruiz Beck and Fred Ruiz to the crowd in attendance.