All in good taste 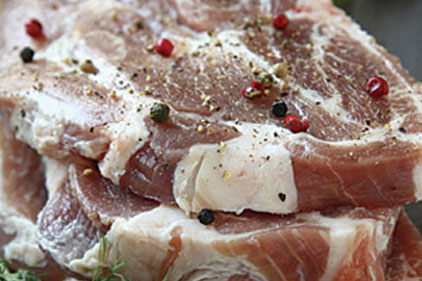 Tanks to the hard work being done by meat processors and flavor companies, consumers don’t have to tolerate bland, tasteless meat for dinner; likewise, they don’t have to run the risk of overspicing something to the point that it is inedible. Meat and poultry cuts come with just the right touch of spices, seasonings and marinades to make mealtime a flavorful experience.

While there has been much talk about different taste trends and world cuisine types gaining in popularity in the United States, there is still a healthy market for basic, traditional flavors.

“There are niches for some of these unique flavors, but mainstream America is still looking for that beefy flavor, pork flavor or chicken flavor without getting too outrageous with the spice or seasoning levels,” states Ed Frizelis, director of technical services for Chicago Meat Authority.

Chicago Meat Authority is a well-regarded meat processor serving the foodservice and further processing sectors. Frizelis says that the flavor trends he has seen include increased popularity in grilled items, as well as some Central and South American flavors. He also says that consumers are adjusting their palate to a lower salt level, so meat products tend to be less salty than in the past.

Rather than spend R&D time working on developing flavor profiles, he recommends working with a reputable supplier to get a seasoning blend for a well-rounded flavor, which can then be tweaked to meet a specific profile.

As far as impacting the meat with the desired flavors, there are two methods: injection and vacuum tumbling. Both systems do a good job of adding flavor; the use of the equipment depends on the type of marinade or flavor system, as well as the cut of meat.

“With injection, you cannot use any particulates,” Frizelis says. “It has to be water soluble, so you can inject the flavor system into the meat.”

A whole-muscle piece like an inside round would need to be injected, in order to get the flavor all the way through the thick muscle of the meat. The flavor system could include spice extractives, but any solids would just block the needles of the injector. Even if needles with larger-diameter holes were used, there would be vertical streaks of particulates in the meat, creating a visually unappealing product.

With vacuum tumbling, which is usually used for thinner cuts of meat, additions like pepper particulates or vegetable particulates can be included. They obviously will not make it all the way into the meat, but the overall flavoring system that is water soluble will work its way in, with particulates left on the surface. For example, a beef fajita, where a consumer would want pieces of garlic, onion or red pepper on the surface of the meat, would be best prepared using a vacuum tumbler.

The technology has sped up the application of flavorings with meat products. Even a product like pastrami, which traditionally has spices applied by hand, can be made with a vacuum tumbler.

“You would do the basic vacuum tumbling first to get the water-soluble flavoring system into the meat, and then you would open the machine up and add some more dry seasoning just to coat the surface,” Frizelis says. “You can get that hand-rubbed appearance.”Pederson’s works with a third-party high-pressure pasteurization company for select products, when a longer shelf life is necessary.

“Sausage is a perfect example,” he says. “Sausage is selling great right now, and there’s not going to be any problem selling sausage during the summer. When grilling season may be winding down and we still want to make a bigger run for efficiencies, we may need to get another 15 or 20 days out of it. HPP is a great way to do it.”