By Elizabeth Fuhrman
In general, two broad methods to detect foodborne pathogens exist. One would be the traditional culture method by which a sample is tracked and inoculated into a medium that allows any bacteria to grow. Then the bacteria are identified by conducting tests. The process typically takes from three to five days.

The second category of tests is grouped as molecular techniques, which are based on the DNA sequence of the organism. The technique called polymerase chain reaction (PCR) has become a very common method of taking samples, and the industry has much interest in developing these molecular techniques, says T.G. Nagaraja, university distinguished professor in the Department of Diagnostic Medicine/Pathobiology in the College of Veterinary Medicine at Kansas State University in Manhattan. PCR tests can identify a piece of nucleocapsid, which would be like a fingerprint of a particular pathogen, and amplify it.

Nagaraja is focusing on PCR-based testing because it is rapid and can handle many samples at the same time. 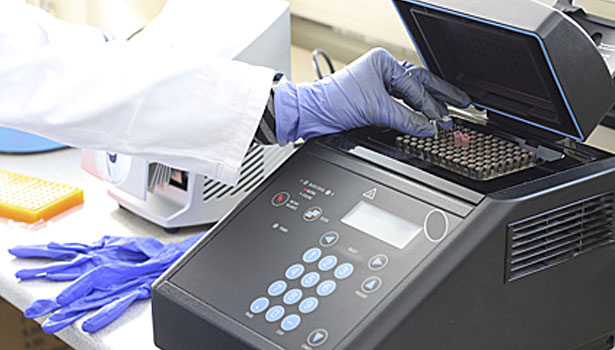 “Whereas the culture method is very tedious and labor intensive and every step takes time to get it done, PCR could run hundreds of samples within one hour,” he says. “And potentially a lot of these methods could be automated. In fact, there are a lot of companies that sell automated instruments where you load the sample and it tells you whether it’s positive or negative. The concept behind those instrumentation methods is all PCR.”

Nagaraja is one of the researchers of the $25 million coordinated agricultural program (CAP) grant from the U.S. Department of Agriculture (USDA), with one of the grant’s primary objectives focused on detection methods for Shiga toxin-producing E. coli (STEC) in the beef industry. Two years ago, six more E. coli variants, such as E. coli O26 and O45, were declared adulterants by the USDA, which means the samples have to be tested for all seven E. coli types. Researchers in the CAP grant are developing procedures to detect the six other forms of E. coli.

Nagaraja’s research project has developed a new PCR-type procedure, called real-time PCR, to detect E. coli O157 that is based on four different genes specific to O157. Real-time PCR is faster than traditional PCR, and Nagaraja’s team believes its procedure is more sensitive than other real-time procedures published because it targets four genes, he says. His project is doing the same for the six other E. coli groups, and so far has two other sets of real-time PCR that target three of the other six STEC. Currently,Nagaraja’s lab has tested fecal samples from cattle, and future research will focus on testing hide and carcass samples.

Another PCR-type method called multiplex oligonucleotide ligation-PCR(MOL-PCR) is being studied by one of the CAP grant’s scientists at the Los Alamos National Laboratory, who is trying to increase the number of unique targets of non-O157 STEC, says Rod Moxley, a professor at the School of Veterinary Medicine and Biomedical Sciences at the University of Nebraska-Lincoln and project director of the CAP grant. MOL-PCR detects specific DNA sequences as short as an individual nucleotide, and can do so in a multiplex fashion. The ability to detect these single nucleotide polymorphisms as well as longer DNA segments that identify the presence of specific genes, and to do so in a multiplex fashion, greatly increases the chances of having a positive detection, Moxley explains. The advantages of MOL-PCR are high-throughput, inexpensiveness and the ability to work in a complex background, such as for example meat products, he says.

In addition, the CAP grant continues work on a waveguide-based optical sensor (WGBOS), a type of biosensor, which targets the proteins or complex carbohydrates of Shiga toxin-producing E. coli. The WGBOS also uses a multiplex approach and can detect multiple targets simultaneously using synthetic receptors and specific antibodies to capture and detect the targeted molecules. The project is in the process of developing sensitive and specific monoclonal antibodies for several targets, which increases their utility in diagnostic assays. In addition, this assay is designed to involve handling samples with minimal or no sample preparation with results within 15 to 30 minutes, Moxley says.

Another rapid test that is commercially available uses a combination of PCR and mass spectrometry to confirm the presence of STEC. The test has some similarities to MOL-PCR, in that it searches for many DNA targets, including single nucleotides, and uses an algorithm to sort through the data. This test can tell processors whether it has organisms in it without actually isolating it on agar media, Moxley says. From a broth culture of a sample provided to the company, the company says it can provide results within 24 hours.

A molecular-based detection method called loop-mediated isothermal amplification (LAMP) also is now commercially available. While the test is DNA based, LAMP requires less and simpler equipment than PCR, but still involves detection of specific DNA targets and is very rapid, Moxley says. LAMP requires a six- to eight-hour culture enrichment to make the bacteria at a high enough level to detect, but the individual test can be conducted in about 40 minutes.

While new rapid testing methods are being developed and launched, rapid testing is not without its challenges. For example, researchers in the CAP grant are working to overcome the relative lack of unique targets on non-O157 STEC.

“E. coliO157:H7 has some unique biochemical characteristics that allow you to differentiate it from other organisms,” Moxley explains. “The problem we’re faced with in the other six that the USDA regulates in raw, non-intact beef is two things: First, they are asking for companies to test for all six, and secondly, none of these six are known to have these really unique targets.”

Another challenge is dealing with background organisms that are inherent to a sample. For example, ground beef invariably is going to contain bacteria that came from the hides of the cattle, Moxley says. Despite effective interventions that minimize organisms, whenever hides are pulled, it aerosolizes microscopic particles that have bacteria on it and the carcass surface becomes contaminated. With those organisms there, to detect the regulated STEC organisms, researchers have to have some way of differentiating them from the background flora, Moxley explains.

In addition, all cattle also carry Shiga-toxin producing E. coliof some type, but only seven O types are regulated by USDA. The difficulty is to be able to detect the ones that are regulated and getting around the complex background and the other organisms that can generate presumption positives, Moxley says.

“These combos of beef trim are 2,000 pounds of meat, and the FSIS-prescribed sample size is 375 grams composited from 60 slices, 12 slices from each of 5 combos,” Moxley says. “Although there is merit in this N60 sampling method, it may not always result in detection of STEC, because these organisms won’t be uniformly distributed throughout the combos. So even if your detection method is extremely sensitive, it doesn’t mean you’re going to detect it because your sample didn’t have it in there in the first place.”

Ideally if the industry could have an automated procedure that is sensitive, highly specific to which E. coli it is and rapid with a 1,000 samples in a few hours, then that’s what the meat packing plant would like to have, Nagaraja says.

“That technology does exist and people are working on that,” he says. “There is a way of pinpointing exactly to identify the right fingerprint for each E. colitype that would tell you if it’s positive, for example for, E. coliO26 and if that O26 has a Shiga toxin gene and the gene is responsible for the attachment of this bacterium into intestinal cells.”