Pork processor Rantoul Foods has grown quickly and somewhat quietly in six years, by setting high standards for its process and building with the future in mind.

When James Jendruczek and Alan Bressler, owners of Trim-Rite Inc., envisioned the growth of their company, never did they believe they’d need to get into the slaughter business. The independent, custom, pork-boning business was founded in 1980 in Schaumburg, Ill., and already had moved twice into larger facilities — the most recent having been a state-of-the-art facility it constructed in Carpentersville, Ill., in 2002. Yet, by the middle of the 2000s, it simply had outgrown the pork supply available from packers.

“We were buying more and more meat every day, and we got to the point where we couldn’t get all the meat we needed,” Jendruczek explains. “So we said we’d get our own source for material — we’ll get a slaughter plant. It wasn’t anything we really wanted to do, but we felt it was a very necessary thing to do.”

Some 150 miles south of Carpentersville, the former Meadowbrook Farms processing facility in Rantoul, Ill., became available, and Trim-Rite snapped it up in September 2010. It took nine months to get the plant back in operation, after roughly a year and a half sitting idle, and in June 2011, the plant opened its doors as Rantoul Foods, a sister company to Trim-Rite. Today, Jendruczek is president and managing partner of Rantoul Foods (Bressler passed away in 2012), and from Day One, he says management had an extensive growth plan in place.

“We put together a 10-year plan stating what we would do, and it was all dependent upon the acceptance of our product, the repeat customers we could get and our ability to source enough hogs,” he says. “At Trim-Rite, the customer is always right, no matter what it takes, and we brought that philosophy here.”

In order to meet those demands, Rantoul Foods needed to provide pork products that didn’t miss on quality. The new business allowed Jendruczek to act on a decade of research with industry experts and customers about what the best pork was and where to get it. His research sent the company to Denmark, and that’s where the Rantoul Foods’ processing story begins.

“In the United States, right or wrong, we’re all about volume — the more volume you can put through a plant, the less money you lose. The pork is pink or tan, and we’ve accepted that as a country for the last 100 years; but that isn’t the way it’s supposed to be,” he says. “The Danish process builds quality into the carcass — they’re processing it to make the best quality, because they compete on quality in Europe.”

Get more of the story online 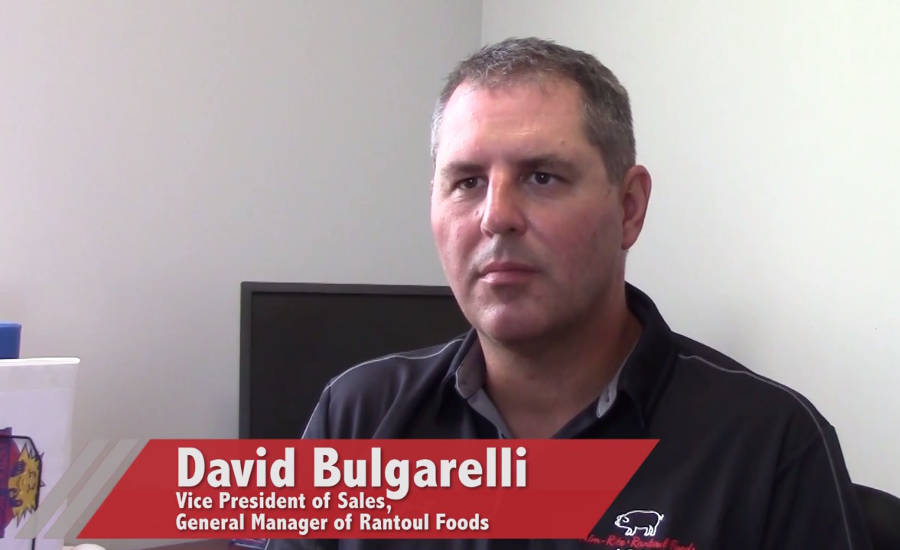 David Bulgarelli of Rantoul Foods discusses how the company’s customers have been the driving force behind Rantoul Foods’ success over the last six years.
WATCH VIDEO.

The Meadowbrook facility was “like a match made in heaven” for Jendruczek’s vision for Rantoul Foods. It had the bones of what the company needed to incorporate the Danish process, and Rantoul Foods added CO2 stunning and an immense amount of additional cooling horsepower to improve the quality of the product and keep the plant as cold as necessary to maintain that quality through the process.

In the meantime, Rantoul Foods had spoken with geneticists and other industry experts, and had settled on a special breed of pork — Silky Pork — to meet the demands of its international customer.

Jendruczek admits to being on edge as Rantoul Foods was bringing to market a product that had yet to be proven in a real-world processing scenario. However, he says, when the first pork was processed and then tested by customers, all the research came to fruition.

“We really didn’t know until we actually processed the first hog a day later and saw what we got,” he recalls. “Our customers appreciated it, as they could see and taste the difference, the bite, the feel and everything — and we had the chemical analysis of why it all happened.”

Today, Rantoul Foods is one of only two plants in the U.S. that processes Silky Pork, and demand has continued to grow, forcing the company to expand to keep up.

Rantoul Foods’ strategies and culture have served it well. At presstime, the workforce at Rantoul Foods has grown to approximately 500 people (Trim-Rite employs just more than 200 additional employees), and the size of the plant has doubled from 150,000 square feet in 2010.

“When Meadowbrook built this facility, they had growth in mind and spent extra money to build it so you could add on to it without cobbling it together, so we were able to take the plant and start filling it out,” Jendruczek says. “Everybody looks at us and thinks, ‘Oh, you’re [former] Meadowbrook, you’re small,’ but we’re not small anymore — we’re two Meadowbrooks.”

In six years, Rantoul Foods has invested $70 million in expanding and improving the facility, with many more projects under way and in the planning stages. Jendruczek says it now has “almost unlimited” growth potential, following the purchase of 92 acres of farmland directly behind the plant.

Make no mistake, however — that growth won’t be unbridled and unfocused. Rantoul Foods will continue to target improvements that maintain or build upon the quality of its product. One example the management team is quick to point out is the handling of offal at the plant. The Rantoul Foods team learned quickly that, despite a good, growth-centric plant design, the Meadowbrook Farms operation struggled with producing quality offal products.

“Meadowbrook harvested internal organs [on one side of the plant], and the freezer was way over there; they tried to overcome that challenge by using dry ice, but it wasn’t successful,” Jendruczek says. “We said, ‘This is a source of revenue that we can’t overlook,’ and we installed a freeze tunnel right there, so our internal organs are chilled within seconds of being harvested. … The faster you chill your items, the better the quality is, and our customers know that.”

During The National Provisioner’s visit in early August, Rantoul Foods was in the process of building its brand new, on-site rendering plant. The facility was expected to begin operation in October, and will feature much of the latest and greatest technology to control odor and protect finished product quality. Additionally, Rantoul Foods expects to benefit from the fact that it will be porcine-specific, allowing it to produce a more premium end product for its customers.

As Rantoul Foods puts the wraps on its new rendering facility, it will be moving full bore into expansion of its cutting room, an addition that will double the cutting capacity of the plant. Rantoul Foods also plans to add a second CO2 stunner and additional barn space to add receiving capacity on the front end of the process.

“The plant always had a really nice cut floor, which we’re still using today, but its limit was around 750 an hour,” Jendruczek explains. “So we’re putting in a second cutting floor to get to 1,400 an hour, to remain competitive and handle our projected growth.”

Once all the investments are made and the plant’s single shift is humming along, the management team says it’ll make the move to add a second shift.

“Getting to 1,103 an hour will come first, we’ll get accustomed to that, get the hogs, get the customers, and second shift will come later down the road,” Jendruczek says. “We’re not a big corporation, so we need to be careful with the risks we take. We could try to force it and make it all work, but at what cost?”

With an eye toward that longer-term future, however, the cutting room addition will include expanded welfare areas that can handle a second shift, meaning Rantoul Foods will be ready when the time comes.

Until then, Rantoul Foods will continue taking growth cues from its own customers, who grow incrementally by product acceptance in the marketplace. Without much fanfare or publicity in six years, that strategy has helped the company grow, and Jendruczek believes it is the way Rantoul Foods must build for tomorrow.

“As customer orders increase, we increase our production to match, whether that’s overtime, expansions, line speed, extended days or whatever it takes,” he concludes. “Because the customer truly is No. 1 for us.”  NP