For more than a decade, southern Idaho’s cattle industry has been in need of a local processing solution, and CS Beef Packers — a joint venture between Simplot and Caviness Beef — plans to capitalize on that demand with efficiency, quality and right-sized growth.

A few miles south of Boise, Idaho, within eyeshot of an old, empty, beef-processing plant shut down more than a decade ago, a brand new beef complex stands as a beacon of hope for the region — a rare green-field construction project for a beef industry that needed an additional processing outlet in the Pacific Northwest.

That new facility, in Kuna, Idaho, emerged from a unique partnership between J.R. Simplot Co., the Boise-based food and agribusiness behemoth, and Hereford, Texas-based Caviness Beef Packers. The new company — named CS Beef Packers LLC — was unveiled in early 2015, and the industry has patiently awaited the opening of the plant.

The CS Beef plant was built on the beef industry experience of the Caviness team — especially given that company’s construction of its own state-of-the-art, green-field plant in 2005 — and the business will be supported by that expertise and the worldwide reach and acumen that Simplot brings to the table.

Startup of the Kuna facility came in May 2017, and CS Beef Packers invited The National Provisioner for a first look at the complex in September 2017, while the plant was still ramping up to full capacity.

“We modeled [Kuna] closely after [our Hereford plant], and we’ve had 12 years to work through tweaks and changes to that model,” explains Trevor Caviness, president, Caviness Beef Packers. In the realm of automation and robotics, there isn’t too much difference between the two facilities, however. 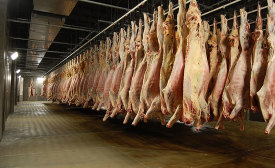 Coolers were designed with additional space, in order to maximize airflow and bring carcass temperatures down quickly and evenly.

“Not much has changed as far as technology since we built the plant in Texas in 2005,” he says. “Due to the varying sizes of our beef carcasses, robotics just [isn’t] there yet. But if there are self-driving cars, surely someone will develop automation for a beef plant.”

Most tweaks at CS Beef revolve around maintaining production efficiency and building food-safety interventions into the lines. For example, the design of the CS Beef process includes a transition hallway between the harvest floor and the beef coolers.

“At our plant in Texas, the carcass goes from the warm harvest floor directly into a hot box, and that temperature change can create condensation,” Caviness says. “This transition hallway virtually eliminates that by giving the carcasses more time for heat to dissipate before they go into the carcass cooler.”

Additionally, carcass coolers were built a little wider than in Hereford, to improve air flow and lower temperatures more quickly. Steve Cherry, plant manager for CS Beef Packers, appreciates what the new plant allows in terms of process flow and efficiency, having worked in legacy plants built prior to the development of some modern food-safety interventions.

“Buildings were already there, and [new] processes were adapted to fit, shoehorned in, with a lot of extra curves and transitions,” he says. “With this plant, the process flow was the concept around which the building was built, so the flow is smooth with minimal transitions, [making it] easier to train and process effectively.”

“Piggybacking from where we start [interventions] in the receiving yards, into the plant, we have what we consider ‘state of the art’ food-safety practices,” he explains. “But we do use a multi-hurdle approach, where we’re hitting it with hot water and applying an antimicrobial, and as far as the microbial counts go, they’re very low.”

One innovative tactic refined by Caviness-Hereford and brought to CS Beef is the use of Dawn dish soap on live cattle in the receiving yard outside the plant. An employee sprays cattle with the simple foam to disperse any hitchhiking flies and to lower the microbial counts before the animals even enter the building.

Immediately after the animal is stunned and shackled, instead of using hide-on wash cabinets, CS Beef has stationed two employees equipped with high-pressure water cannons to blast the hides with hot water as the animal moves toward the harvest floor. 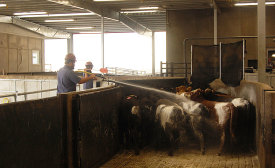 A simple foam of air, water and Dawn dish soap is sprayed on cattle while in the outside receiving yard to repel flies and act as an initial antimicrobial food-safety hurdle.

This high-pressure hide-washing process has become a food-safety best practice for both Hereford and Kuna, says Caviness.

“Our process is more manual, but in doing so, we can be more direct on the midline and certain areas of con-cern,” he explains. “You can clean them [with brushes and a cabinet], but high-pressure water seems to work very well for us, especially in the winter, when there’s a lot of mud and cattle come in dirtier.”

Further along in the process, CS Beef’s heat-treated, recirculating carcass-wash system treats each carcass, helping knock out any remaining pathogens while reducing the plant’s water consumption in comparison to a traditional system.

For J.R. Simplot, the partnership with Caviness to create CS Beef sprung from the need to secure processing for its own beef and dairy herds.

“When [Tyson Foods] shut down its Boise operation, that basically stood the cattle industry in the Northwest on its head,” explains Tom Basabe, president, Simplot Land and Livestock. “Simplot — with a lot of cattle on feed at the time — had to figure out a way to never get trapped in that situation again.”

Simplot once had its own boxed-beef plant in Nampa, Idaho, which focused on export to Asia, but that plant shut down in 2003. Despite its struggles with efficiency, Basabe says, it had given Simplot a positive reputation in the beef export marketplace. Basabe and the Caviness family — who had been looking for a way to expand their own business at that time — were introduced through a mutual business partner in October 2014

“Terry, Trevor and Regan hosted me in Hereford, … and I laid my concept on them,” Basabe recounts. “Long story short, by the first of May, 2015, we had 1,240 acres of land bought across the tracks, another 80 acres here where the plant is, and Schmeeckle Brothers [Construction] had broken ground, yet we didn’t have anything actually on paper yet; so we’re very comfortable with the partnership.”

News of CS Beef’s startup has brought several of Simplot’s old customers knocking on the doors again — especially since USDA granted Kuna the same establishment number the Simplot-Nampa plant had — creating a tremendous opportunity for growth once the plant hits its stride.

“Simplot exports potatoes and vegetables all over the world, and I mean big volume,” Basabe says. “My goal is to tap into those same supply lines with boxes that say ‘CS Beef Packers in Idaho,’ but we have to grow into that first.”

For the time being, CS Beef Packers has been focused on producing for foodservice, quick-serve restaurants and grinders, but as the fed-cattle programs grow, the plant’s retail production will increase as well. At the time of The National Provisioner’s visit, plans were already in the works to expand the plant with a state-of-the-art ground-beef production facility. Groundbreaking hadn’t yet occurred, but the area had been roped off and the company estimates a summer 2018 startup.

While not yet at full strength, Cherry says the plant is on the cusp of its next operational milestone: 1,000 head per day. It has been a measured startup, on schedule, with minimal hangups along the way.

“Our biggest hurdle right now is simply creating stability in a couple areas from a workforce training standpoint, [which] would allow more volume and better efficiencies,” he explains. “We’ve also got the challenge of matching up our sales footprint with our production footprint; we want to produce what we can sell.”

Simplot and Caviness are comfortable letting the plant grow as it needs to in order to be a long-term solution.

“We’ll take it one day, one year at a time,” Caviness adds, “but we didn’t build [this company] for the next five or 10 years; it’s an 80-plus-year plan to sustain this region and be an integral part of the beef and dairy production industry.”

At the plant level, Cherry relays that the employees understand their role in that plan.

“Our purpose, quite simply, is that we feed the world, and we’ve got principles that we live and lead by,” he concludes. “We have some ‘must haves’ to be a part of this team — non-negotiable items — such as integrity, humility and resilience. That will allow us to become bigger, stronger and faster, because we’re going to do it the right way and be very sustainable.”

Partnerships built on that attitude and approach, and furthermore focused on filling a large gap in the marketplace, typically are the most comfortable — and lucrative — business ventures one can find. NP