J&B Group has followed its core principles for nearly 40 years and today reaps the benefits of expanding to meet customer demands.

When The National Provisioner last visited with J&B Group, the meat and poultry landscape — and the world — was far different. Certainly, 14 years later, one might expect the St. Michael, Minn.-based company — possibly best-known as the processor behind No Name steaks, poultry and seafood — to have grown, given that it has survived what has been some tougher times for many mid-sized to large processors.

However, J&B Group has done much more than “survive” — it might be a surprise to find out the company has doubled in size while sticking closely to its business model built on agility with its customers, diversification of its services and high-quality treatment of its associates. Many processors strive to diversify their business plans, but in fact, few achieve as much success as J&B Group has, having evolved into a “manufacturing distribution logistics organization,” in the words of company president Chuck Weum.

“J&B has been able to stay in front instead of always looking at what was, and we’ve been able to create customer solutions that continue to stay relevant,” he continues. “Today, we have a very diversified model: cold storage, freight brokerage division, two manufacturing plants, CEG (commodity exchange) [and] our distribution business.”

Indeed, says CEO Mike Hageman, the diversification of the business has been a virtual cornerstone for the company, instilled from Day One by his father (and current chairman), Bob Hageman, 39 years ago. 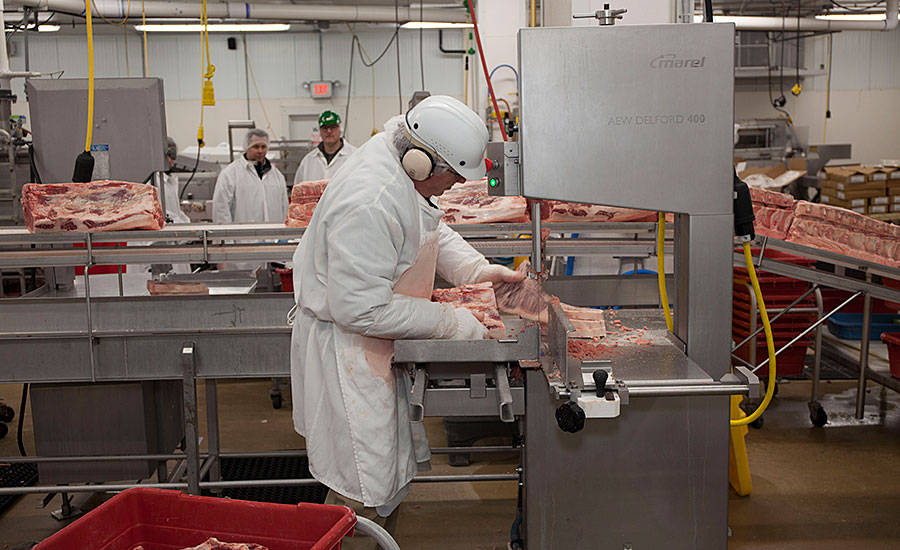 “He believed diversification was the way to perpetuate the business and that it brought sustainability,” Mike Hageman explains. “Along the way, we made a series of acquisitions to round out the portfolio of products and services that we provide.”

In 2012, the company acquired WW Johnson Meat Co., a fresh ground-beef processor in Minneapolis, which was a really big deal for the company, says Weum.

“We saw a big compliment not only in products, but most importantly, in the people,” he says. “The way that ownership ran the organization really matched our values as a company, and it fit in really nicely from an acquisition standpoint.” 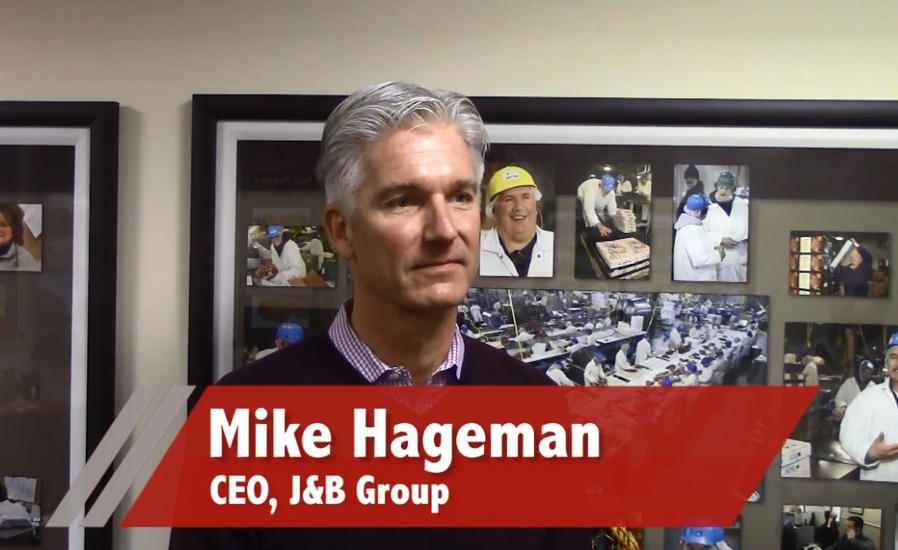 J&B Group CEO Mike Hageman discusses the unique corporate culture that has driven the company's success over the last 39 years.

At the same time as the WW Johnson acquisition, J&B endured another major change to help it improve in leaps and bounds, and that was the conversion to an ERP system for company business. Hageman says it was painful, but the company is reaping the benefits today.

“The system we were on was a legacy system that we had homegrown a bit, with the scope of operations and activities,” he says. “We were basically Band-Aiding big activities to it as we went along, and this new system brought it all together.”

In the last five years, J&B’s agility and continuous improvement efforts have been the heaviest influencers on success. Additional synergies and investments into the former WW Johnson plant in Minneapolis allowed J&B to roughly double the size of that business since acquiring it, but the next steps could be the largest for the business. 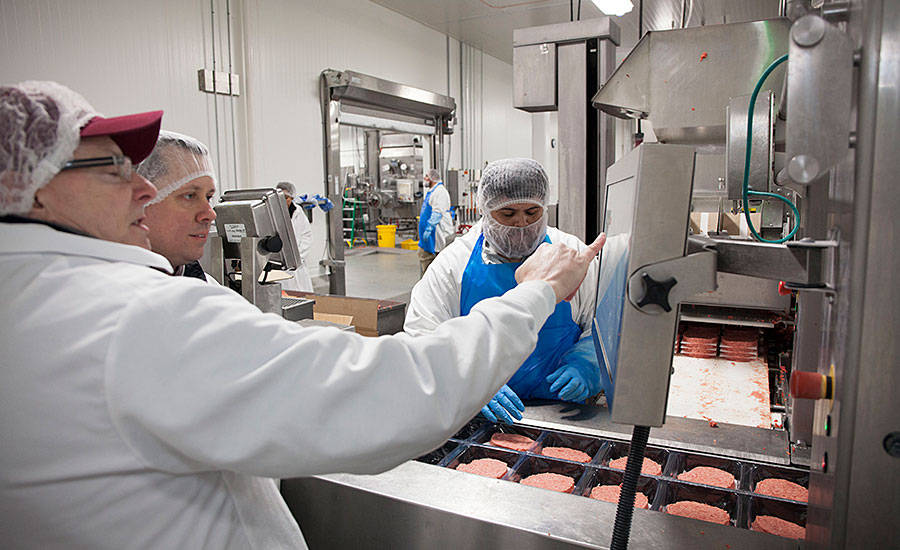 Hanacek gets a quick tour of the operating systems that J&B Group uses by Russ Sjoquist, VP of Operations, while David Miranda packs patties in the background in the St. Michael plant. Photo by Andy Hardman

The company met its goal to finish the move in Q1 2018, and at the time of The National Provisioner’s visit, the lines had all been in place for five to six weeks. The move also allowed J&B to install a seventh line (up from the six lines housed in Minneapolis).

“We continued to invest in Minneapolis, even though it wasn’t here on our campus, so we brought the equipment,” Weum says. Additionally, the company brought much of the expertise. “We told the associates in Minneapolis this was going to happen more than a year ahead of time, and we retained more than 70 percent of those associates.” 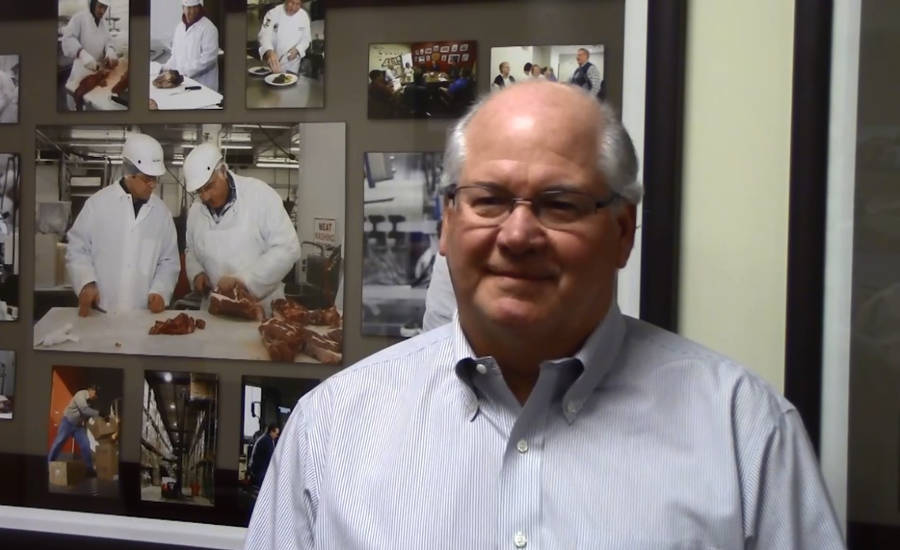 Chuck Weum, president of J&B Group, explains how the company trains and works to retain its new employees.

In addition to the fresh ground beef operations, J&B recently completed a 110,000-square-foot expansion of its cooler/freezer space — a collaborative effort with cold storage customers to provide further service.

J&B’s core distribution business still serves a seven-state area around Minnesota with nearly 70 trucks and 100 trailers. Outside the seven-state region, third-party shipping companies carry J&B products to approximately 45 states. Weum notes that the company’s customer base spans all channels from foodservice to retail to processors, and that a majority of growth in the last three years has come outside the seven-state region — some of it well beyond that region.

“We’ve been able to grow internationally,” Weum says. “We started that three years ago and have been pleasantly surprised at the ability of our team to penetrate South America and get not only our commodity products, but also our value-added protein products, into those countries.”

It’s a testament to the company’s ability to truly serve its customers regardless of channel in which they work.

“Customers are trying to adapt to consumers, so agility with our customers is key, and they need to partner with people who have that same type of urgency,” Weum says. “This company was built first on service, second on quality and third on respect, and those principles resonate with our people and our customers.” 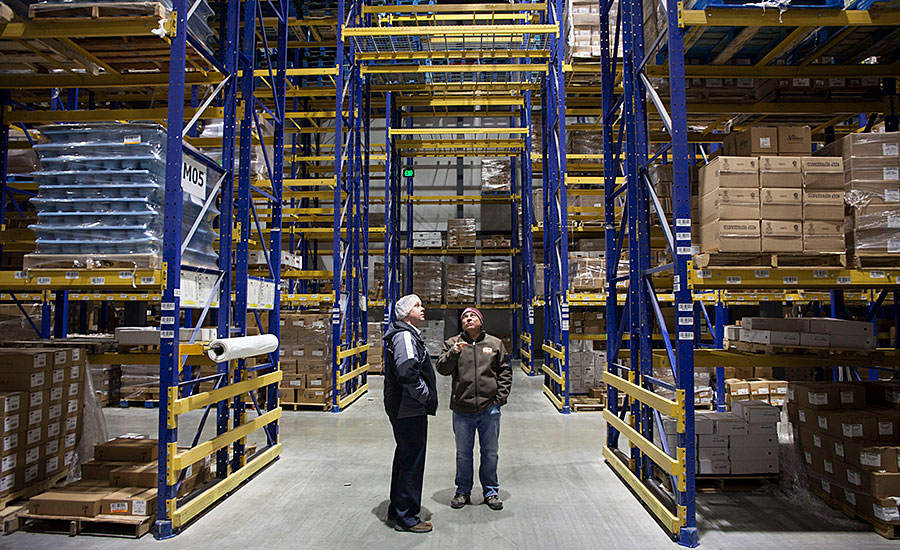 Hageman agrees, saying that the blurring of the lines between channels has created opportunities for agile companies such as J&B to serve customers better.

“It’s hard to make a distinction between one customer set of requirements and another, which blurs the type of services that are required by a company like ours,” he explains. “So we [have become] a full-service offering.”

Hageman believes there’s little reason for the company to deviate from the path it has followed thus far, and expects expansion through acquisition to continue for the company — again, as long as the corporate culture is the proper fit.

“We have a pretty unique culture here,” he says. “It’s not impossible, because they’re out there — but to find another company that is aligned with our culture is going to be one of the bigger challenges.”

Additionally, J&B expects to expand to a new geographical region, not adjacent to its current seven-state home region, and build an entirely separate customer base. However, it’s worth noting that J&B isn’t exclusively focused on adding new facilities and customers, Weum says. 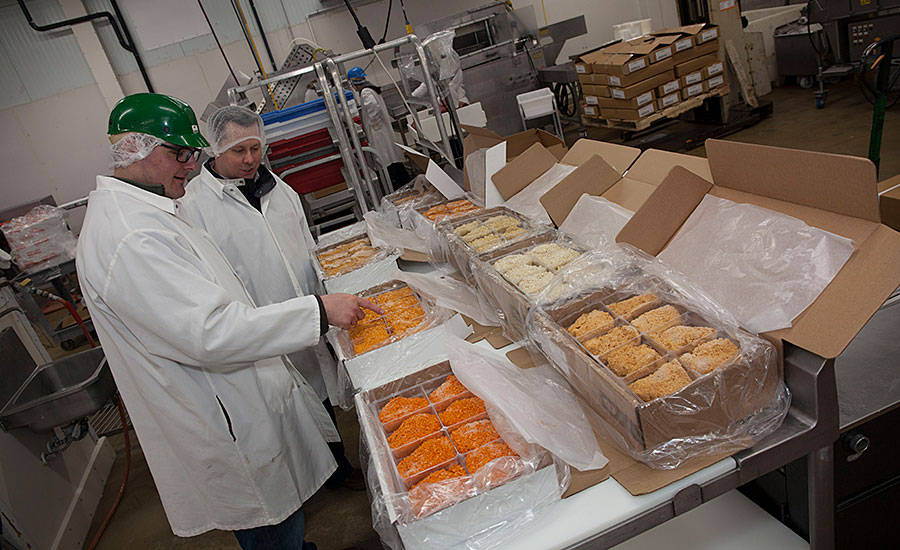 Garberg and Hanacek discuss the extensive production capabilities the St. Michael plant allows while examining a variety of breaded chicken products waiting to be shipped. Photo by Andy Hardman

“Through the recent investments we just made, we have enough capacity to manage [internal] and outside growth, and we’re in a very good position to produce solutions for the next three years,” he explains. “So I think sustaining existing business is critical, and we need to make sure we’re taking care of business before we go out and get more business.”

J&B’s diversification strategy has given it an enviable position to be a one-stop shop for its customers, Weum goes on to say, that can problem-solve and adapt to its customers’ needs much more easily than others. Thus far, the sales teams have done well to articulate those points.

“We want customers to know we’re here to serve them, and that we win only if they win,” Weum concludes. “We know their needs will change, and we’ve got to make the process simple.”

Having grown at a comfortable pace most of its 39-year existence, J&B Group appears at the precipice of another major leap forward across several of the blurry channels it serves — making complicated business simple for its busy customers by giving them the service and respect they demand and deserve.  NP