Incorporating healthier and more vibrant ingredients in breading and batter can enhance the appeal of value-added meat and poultry.

Merchandising meat and poultry with breading and batter is increasingly complex.

While retailers and restaurants leverage the elements to enhance the flavor and texture of proteins, a greater consumer focus on healthy eating is forcing a shift in product ingredients if operators are to maximize activity.

With more wellness-conscious consumers seeking to avoid foods high in fat and calories, which can contribute to high cholesterol and heart disease, suppliers and merchandisers must offer options that meet both the taste and health expectations of shoppers in order to attract a wide range of buyers, analysts say.

Though fried chicken remains a traditional and widely accepted option that many shoppers view as an indulgence for which they’re willing to disregard health concerns, it is a relative outlier among breaded and battered proteins.

“Beyond fried chicken, breaded and battered applications tend to be dated and not very on-trend,” says Maeve Webster, president of Menu Matters, an Arlington, Vt.-based food industry consulting firm. “It is key for retailers and suppliers to modernize the items as much as possible.”

That can include offering healthier options by lightening the breading and batter; creating smaller portions; pairing breaded and battered proteins with large helpings of produce; or reducing the use of heavier sauces, dressings and gravies, she says.

Such changes will help make the products more relevant to younger consumers, Webster says, adding that while fried chicken is popular among all age groups, other breaded and battered meats and poultry skew toward older consumers.

Yet, because of current shopper resistance to most selections, Webster suggests supermarkets and restaurants “shy away from these items altogether unless they can take a completely different approach,” which primarily includes offering items with healthier and innovative ingredients.

A September 2017 online survey by Chicago-based market research firm Mintel Group found that just 9 percent of consumers indicate that they seek breaded poultry, while health-oriented poultry that is hormone free, free of growth stimulants and raised in a free-range environment are sought by 35, 31 and 22 percent of consumers, respectively. The 1,786 survey respondents had bought poultry in the previous three months. 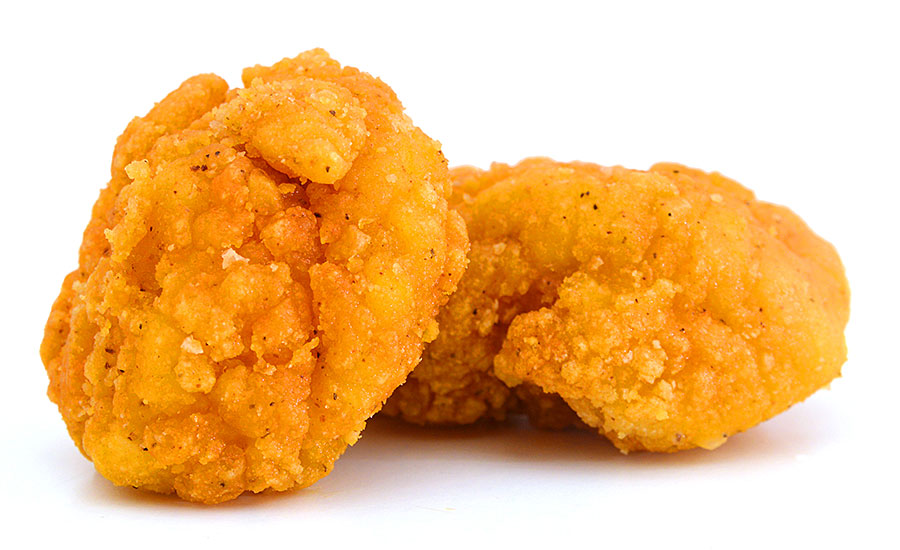 Shopper concerns about the healthfulness of breaded and battered meat and poultry, meanwhile, involves both the ingredients in products and elements that are missing, says Caroline Sluyter, program director, Whole Grains Council, for Oldways, a Boston-based nonprofit organization dedicated to improving public health through traditional eating choices.

She notes potential buyers often consider, for instance, whether the products contain whole grains, vegetables, legumes or other nutritional ingredients, as well as whether the items are deep-fried or baked.

More suppliers, however, are working to incorporate better for you ingredients in products, Sluyter states, with whole grains a key component.

“Using whole wheat or whole grain corn flour in place of white flour or refined corn flour in breading recipes is an easy way to boost the nutritional profile of a product while also contributing richer, nuttier flavors,” she says.

Some suppliers, meanwhile, try to appeal to health-conscious consumers by creating baked versions of breaded meat and poultry that crisp up in the oven rather than the deep fryer, Sluyter says.

“While this won’t speak to all health and dietary concerns, it can improve overall perceptions by conveying quality and freshness,” he says.

The promise of promotions

Health issues aside, many shoppers are wary about purchasing the proteins because of suspicions merchandisers are using breading and batter to hide the grade, quality and freshness of meat and poultry, says Anne-Marie Roerink, principal of 210 Analytics, a San Antonio-based marketing research and marketing strategies firm.

In response, merchandisers should more prominently call out the product’s grade and freshness, indicate where and when the preparation was done and what is and isn’t in the ingredients, she says. They also need to make it simpler for shoppers to prepare breaded and battered meat and poultry at home.

“There is mass confusion over the use of butter versus margarine versus the various oils during preparation,” she says. “Retailers can use store dietitians to help provide some clarity and to pair the proteins with such items as salad and lots of veggies to balance out the meal.”

Because the popularity of breaded and battered meat and poultry can vary widely from store to store, retailers looking for strong interest need to devise appropriate merchandising strategies for each location, Roerink says, noting they can gage consumer intent by incorporating products in limited time offers and analyzing responses.

“Offering schnitzel during an Octoberfest theme across the store could also be a great way to introduce shoppers to breaded pork, veal or chicken in a playful way,” she says.

“Chefs are using popped amaranth as a coating for breaded meats because it provides a very satisfying dry and crunchy texture,” she says. “The crunch of quinoa is popular for a similar reason.”

Chicken, meanwhile, remains the most prevalent breaded protein and is becoming more popular across all restaurant segments, Winship says, adding that Technomic forecasts chicken to be one of the fastest growing categories in limited service restaurants this year. 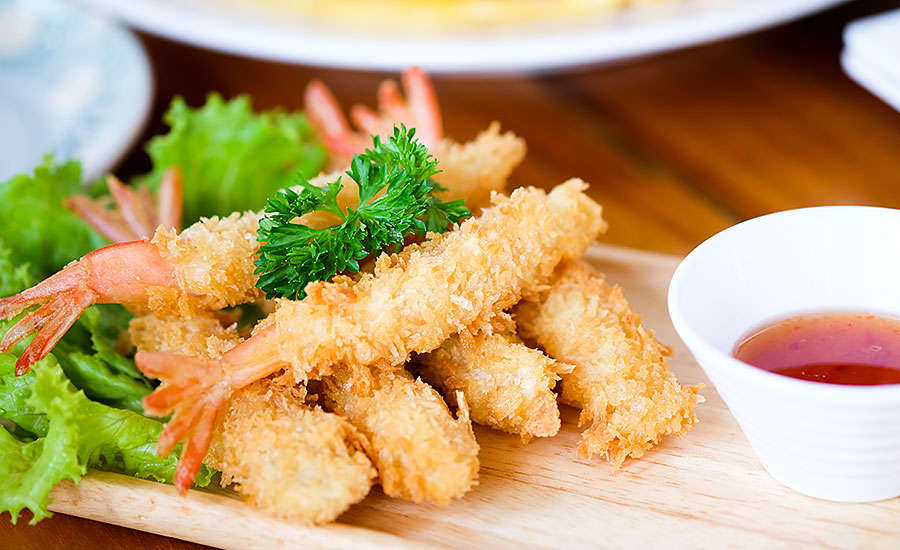 Consumers between the ages of 18 and 34 are primarily driving demand for breaded chicken appetizers, including such selections as boneless wings, tenders and popcorn chicken, while those 45 to 54 index more to breaded shrimp, Technomic notes in its 2017 Starters, Small Plates and Sides Consumer Trend Report.

Shopper demands for spicier options also are on the upswing, which creates opportunities for breading recipes to contain more peppers and spices, Winship says.

“The problem with most breaded and battered meat and poultry offerings, excluding fried chicken, is that merchandisers stick to a formula that may be familiar and appealing to much older consumers but is no longer relevant to younger consumers and the way they eat,” Webster says. “The items tend to hang on in retail but are not growing in either supermarkets or foodservice.”

Along with newer recipes, restaurant operators and suppliers are more likely to boost interest in breaded and battered proteins by using merchandising terms that suggest a more artisan gourmet product, such as “hand battered,” says Mike Kostyo, trendologist at Datassential, a Chicago-based market research firm.

While the term “breaded” has appeared on fewer restaurant menus over the past four years and the use of “fried” is flat, “hand battered” as a descriptor is increasing, he says.

Datassential research reveals the term “breaded” is found on just 37 percent of restaurant menus and its decline is likely because of the rise of more artisan phrases such as “hand breaded” and “hand battered.”

Kostyo states, however, that more breaded and battered meat and poultry selections on menus are featuring bold regional and global flavors, including dishes that are becoming relatively common, such as Nashville hot chicken, and options inspired by Asian cuisine, including Korean double-fried chicken and pork katsu which is found in sandwiches and ramen.

“Retailers and suppliers should not only pay attention to these specific protein trends, but also to growing global flavors that they can leverage in the category and include either in the breading or batter itself or a sauce,” he says.

Flavors that are gaining popularity with consumers include chili lime, Thai BBQ, turmeric, salsa roja, saffron, yellow curry and adobe, Kostyo says, adding that merchandisers who offer options with satisfying flavors while addressing consumer health concerns will be in a strong position to spur greater breaded and battered meat and poultry activity.

“Products that taste great and are filling, yet satisfy any health or value worries, are meeting a real consumer desire,” he says.

Sluyter adds that opportunities for enticing consumers with whole-grain ingredients also remains strong, and that there is large potential for overall category growth.

“Though whole-grain products have been going mainstream in many areas of the supermarket for years, the breaded and battered meat and poultry department is still a relatively new area of experimentation,” she says. NP

How to solve the breading and batter riddle

How to keep the breakfast meat category cooking

How to solve the breading and batter riddle

Batter and breading: Down but not out