Comfort foods are perennially popular items, but sometimes even comfort foods need an upgrade. At the Annual Meat Conference, held early in March, Golden West Food group touted its Meat District line of products. The line, which includes burgers and chicken wings among other products, promises to add a gourmet touch to some old favorites.

“The whole idea was to take common products – a burger, a chicken wing – but make it a little better,” explains Chef Isaac Flores, an R&D Chef for GWFG.

For burgers, the company decided to develop burger blends, using several beef cuts to make the patties. One of the most popular burgers, for instance, is a chuck, brisket and short rib blend.

“It’s not just about getting 10 pounds of each and then blending it,” Flores explains. “It’s about getting the right percentage of each to enhance the flavor, to keep it soft, to keep it becoming a sausage. We played with all these different blends until we got the right flavor.”

One of the other burgers is made of 100-percent tri-tip. Flores explains that the product is designed to offer consumers the taste of a quality tri-tip steak without the time that is required to grill a steak properly.

The wings, which GWFG has dubbed “party wings,” feature a variety of creative flavors. The Buffalo wings have a touch of mango and habanero to add a different taste to the traditional favorite. There are also Ranch-flavored wings, beer-brined wings and a teriyaki that isn’t as sugary as conventional teriyaki sauces.

Golden West Food Group has also taken barbeque to a new level, thanks to a partnership with Jack Daniels. The company has been producing the Jack Daniels line of fully cooked barbecued meats for the last 15 years. Last fall, the company became the licensee to manufacture a line of Jack Daniels barbecue sauces, too.

Tony Cimolino, chief marketing officer, said that the company will roll out a line of premium sauces this summer.

“It uses only high-quality ingredients, so there are no preservatives. There is no high fructose corn syrup, there’s no corn syrup, and the product is also gluten free. And, inside is a little bit of Jack Daniels Tennessee Whiskey,” he says. “These are kettle cooked in small batches, they’re done in Fullerton, Calif., and we distribute nationwide.” 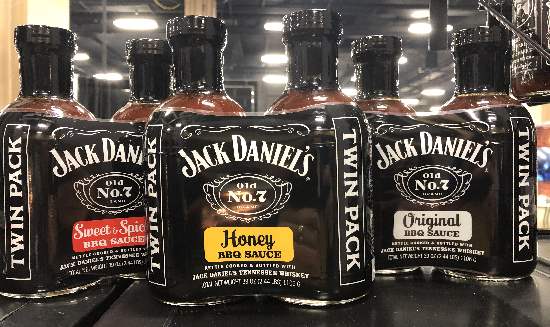 Golden West will introduce the line with an original, a Sweet & Spicy and a Honey BBQ sauce. The bottles are designed to stand out with a premium look. They are glass, not plastic, and they hold 19.5 ounces of sauce, which is more than the industry average of 18 ounces.

As an added benefit to producing the Jack Daniels sauces, Golden West is able to incorporate the sauces into its barbecue meats line. It’s utilized the liquor company’s extensive product line to produce new products.

“About three years ago we launched Tennessee Honey, which is a line of pulled pork and pulled chicken using the Tennessee Honey liqueur, which is one of the bottled flavored variants from Jack Daniels,” Cimolino says.