One year ago, determining the winner of The National Provisioner’s Processor of the Year award seemed as standard as it had been for the 25-plus years the publication had doled out the award. This year could have been a concern, what with the COVID-19 pandemic’s far-reaching effects on the food industry. Yet, as nominations began to roll in, it became apparent that more than a few processors had managed to navigate their way successfully through the pandemic and the effects of its societal shutdowns, even while others struggled or barely survived.

The processors who had the best run over the past year or two quickly recognized the solutions that would work best for them, then did not flinch in making changes in such an extreme market.

Like many, Oakwood, Ga.-based Wayne Farms had pre-pandemic goals, upon which its eyes were firmly focused. When COVID-19 shut everything down, though, the company quickly adapted approach and execution to kickstart new retail business, complete expansions and renovations in its south Alabama complex and weather the storm in the foodservice marketplace better than many could have expected given its ties to that channel. Based on these results, Wayne Farms has been named The National Provisioner’s 2021 Processor of the Year.

Processor of the Year


“The expansion of our Enterprise and Dothan facilities is probably the biggest success story of the last year and a half for us,” says Clint Rivers, president, CEO and chairman of the board for Wayne Farms. “I’m proud of the way we handled the unprecedented challenges last year while we continued to invest in the growth of our business.”

Andy Hanecek interviewed several of the leadership team at wayne farms on a variety of sidebar topics, which will be published in video format through the month of June, you can view these videos at: https://www.provisioneronline.com/waynefarmspoy

Indeed, the journey the chicken processor traveled in the last 18-24 months was likely different from the original plan, yet despite the COVID-19 pandemic, the company navigated that itinerary with few delays and detours. Additionally, the company reports it did not lay off employees or cull birds due to the major disruptions the pandemic caused — facts that Rivers and other members of the management team are proud to share. Wayne Farms offered on-line production employees the opportunity to take a leave of absence (retaining their jobs when they were ready to return) if they were not comfortable with working during the early months of the pandemic, Rivers relays.

To find evidence of the pre-pandemic plan Wayne Farms followed, it’s worth mentioning that The National Provisioner’s last plant visit prior to the COVID-19 shutdown was to the company’s Enterprise, Ala., facility. That article, published in March 2020, featured the completion of the last major stages of the renovation and expansion of the company’s south Alabama chicken complex, which produces a large part of the company’s product. In conjunction with those upgrades, Wayne Farms had been modernizing and advancing operations at its Dothan and Union Springs, Ala., plants and live operations over the years, says Kevin McDaniel, chief operating officer (COO) for Wayne Farms. 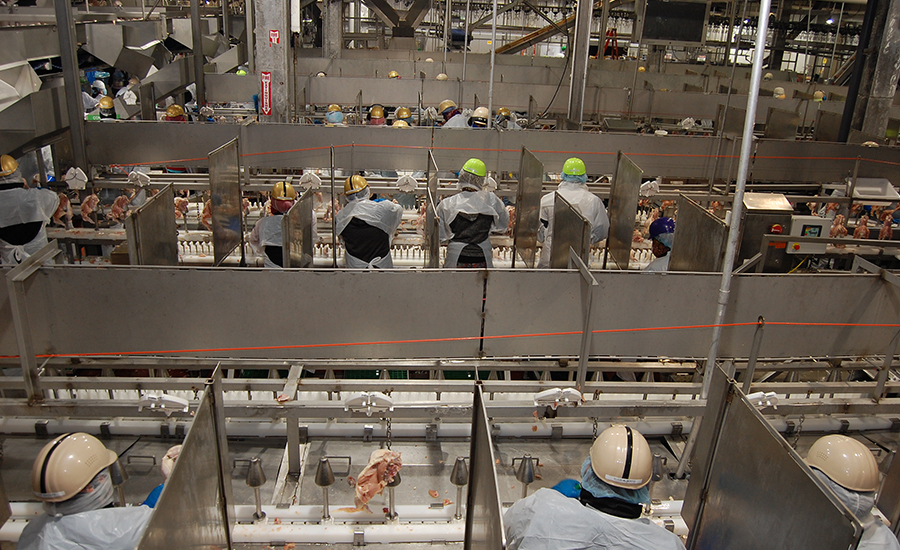 “We’ve invested more than $300 million in south Alabama, with a new feed mill, adding a line in Dothan and putting in the additional line in Enterprise,” McDaniel explains. “It’s been a significant focus of our growth, and we have a key customer base in those facilities that has been great partners to support, encourage and drive that growth.”

All these moves have positioned the entire south Alabama operations as its own self-supporting system, explains Brad Williams, area complex manager for Wayne Farms.

“We transitioned [Dothan] to a two-line, small-bird plant to support a major customer, and now we have two sister facilities that do very similar things in Dothan and Enterprise,” he explains. “That gives us synergies to move people, production and raw materials between them as we need it.”

In Dothan, Wayne Farms added an 11-million-pound holding freezer and an in-line, variable-retention freezer in 2018 — previously, the company had been using a third-party vendor for freezer capacity. Matt Rials, operations manager in Dothan, says the freezing process it provides has increased service to the company's customer base.

“The freezer helps because now, when product exits the portioning system, it’s not touched again by anyone until it reaches the customer, which reduces points of cross-contamination,” Rials says. “And our customers benefit because they have a complex product mix, and this helps us fill orders quickly and with quality product.”

Automation — as might be expected for a poultry plant — has been the focal point of renovation and advancement at Wayne Farms in recent years. In fact, the weekend after The National Provisioner’s visit to Dothan, the plant was scheduled to install a new automated deboning system.

Michael Crump, senior director, Fresh Operations, for Wayne Farms, adds that the Enterprise facility is scheduled to automate more of its deboning operation this summer as well.

“We’ve added automated packaging there, and we’re looking into getting into robotics as well,” Crump says. “The robotics will harvest the good meat off the discharge side of the [portioning] machine.”

Because of the innovations and flexibility built into the entire south Alabama complex, Wayne Farms was able to be much more nimble with its foodservice business than may be typical of a company of its size when the pandemic rearranged those channels and demand in them.

“The size of Wayne Farms is an ‘enjoyable’ size: We are large enough to invest in innovation and try new techniques, but we are not so large that we don’t know each other,” Rivers says. “If a customer wants something specific, and we can do it, we will do it.”

“We had to realign our efforts and pursue different avenues with existing foodservice customers, and this proved to be very successful,” Bell says. “Through the whole pandemic, we’ve stayed in lockstep with these customers to supply them as much product as we could possibly produce. We weren't always successful meeting their needs, but the increased communication helped to manage supply chain expectations. That new communications approach included weekly and sometimes daily calls with each customer; we shared our production schedules and matched it with their forecasted demand.”

Back on the retail side, Wayne Farms had already started to develop a new business there prior to the pandemic, launching brands such as Naked Truth and positioning the foodservice-focused Chef’s Craft brand to address retail demand as well. Rivers reiterates the move was in the cards well prior to the pandemic.

“We realized there was no reason we couldn’t be in the retail space,” he says. “The goal has always been to utilize the prepared foods operation to its full extent, generating more opportunities to grow that business.” 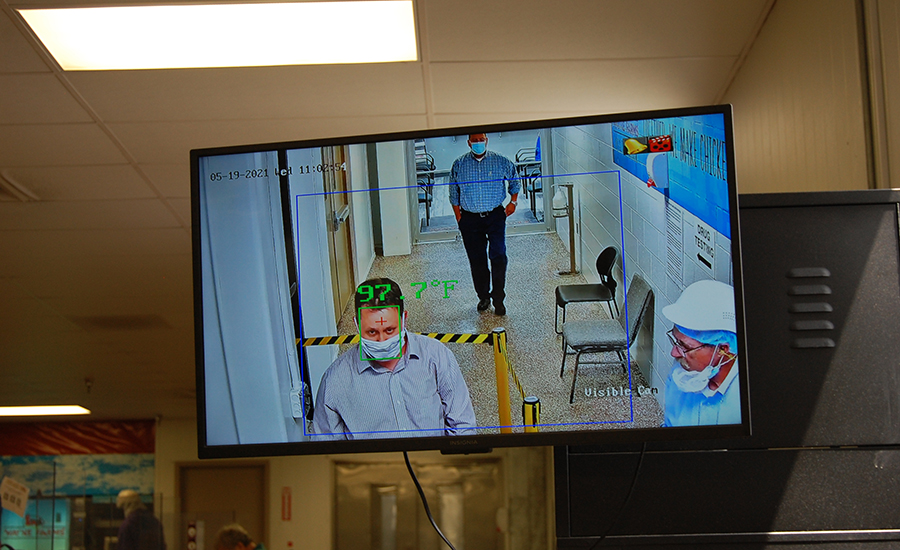 When COVID-19 hit, ramping up these businesses became that much more important. Naked Truth already had experienced some success in the marketplace. During the pandemic, Wayne Farms had to ratchet up the speed to market, particularly with regard to Chef’s Craft.

“Our facility had to transition very quickly,” Bell adds. “We created and launched three Chef’s Craft items within 10 weeks’ time for retail distribution. We’ve received good responses and currently have more than 4,000 retail store placements; and we’re looking to expand distribution as well as product offerings.”

As society returns to a lifestyle more reflective of pre-COVID times, companies that were able to shift gears as well as Wayne Farms did through the pandemic will have new challenges to keep business booming.

Wayne Farms’ success in transitioning to a more diversified company was accelerated, but the company managed to stay focused on the destination while altering its journey through the pandemic, and is positioned to make a name for itself in new channels with new consumers. 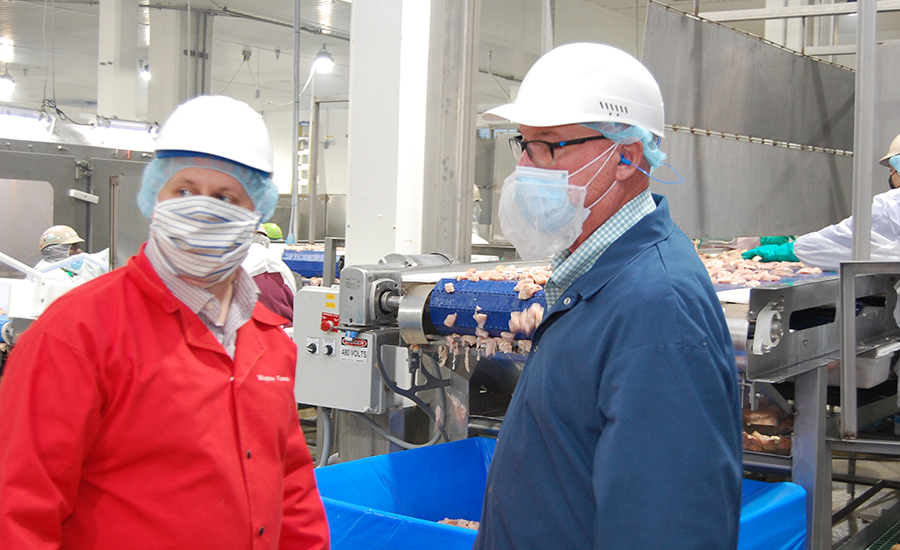 Processing plants might never look the same as they did before the COVID-19 pandemic. Andy Hanacek, editor-in-chief, entered Wayne Farms’ Dothan, Ala., processing plant and had his temperature checked electronically (right photo), and then saw the permanent barriers installed between employees working the cone lines on the processing floor (left photo), such that the size of the room can only really be captured from above.

Hanacek (left) tours the Dothan plant with Matt Rials, operations manager, during his visit to award Wayne Farms the Processor of the Year honors.

2016 Processor of the Year: Foster Farms

2019 Processor of the Year: Carl Buddig and Company

2017 Processor of the Year: Monogram Foods