This website requires certain cookies to work and uses other cookies to help you have the best experience. By visiting this website, certain cookies have already been set, which you may delete and block. By closing this message or continuing to use our site, you agree to the use of cookies. Visit our updated privacy and cookie policy to learn more.
Home » Protein Problem Solver: Crust-freezing of deli logs aids in slicing
Meat and Poultry ProcessingDeli

“In order for us to be successful, cooling meat to the proper temperature is crucial. It became apparent we needed to establish a much tighter process at our facility so we could improve our overall effectiveness of slicing meat,” he says. Chilled beef, pork and poultry products arrive in Mount Pleasant from other West Liberty plants and suppliers, and are offloaded until ready for final processing.  The slicing process uses clean room technologies to meet the highest standards in food safety.

Deli logs can benefit from crust freezing prior to slicing, especially at high speed.

“Firming up the protein enhances sliceability, quality and yield,” Griewe explains. “It just makes a better slice — and it typically impacts your throughput.”

“The logs went from a storage temperature to an ideal slicing temperature, and Linde provided us with the rates, desired temperatures and physical characteristics of that log on the crust and the core,” Greiwe says. The modular tunnel freezer provided by Linde was primarily dedicated to the roast beef line.

The team ran other proteins to further explore the parameters between cryogenic crust freezing and slicing configurations. Ham, one of the plant’s high-volume products, represented a valuable opportunity. Once chilled, ham needs to be quickly sliced.

“We were slicing ham on several different lines, and we decided to put it all on one line with a high-speed slicer and a high-volume packaging machine,” he explains.  The slicer can be fed with six full-size deli logs at once and cuts with a single blade that can travel at speeds up to 2000 rpm. 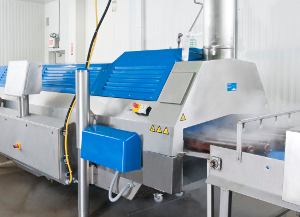 “We were using multiple methods of cooling, and that increased the potential for variation in core-to-crust temperature,” Griewe adds. To create greater slicing repeatability and minimize losses, Linde installed a new high-efficiency Cryoline MT hygeinic tunnel freezer in May 2011 for the ham line.

“We can now slice on that one line what it took two lines to slice,” Greiwe says.

Beyond the freezer’s capacity (over 10,000 lbs./hr.), West Liberty liked the smaller footprint and hygienic design, which provides full access to all internal surfaces for cleaning and sloped surfaces above and below the belt that drain unwanted moisture.

The new Cryoline MT tunnel line eliminates the variability associated with the mechanical and blast chillers, and gives the flexibility to recrust if there are short production delays. It also permits a more in-line process.  Every protein has an ideal slicing temperature, and the cryogenic tunnel freezer helps control that key variable, Greiwe says.

“That’s the beauty of the Cryoline MT tunnel,” he says. “You identify that sweet spot, you put the log in the slicer, and you slice it. Those logs come in from the outside source, go right into the loading room, right into the tunnel, [and] are sanitized, peeled, loaded and sliced, all in minutes.”

Protein Problem Solver: Cut the cost of lubrication purchases in half