Drought strikes farmers and protein processors hard, and will ripple through the food chain.

Dan Emery
KEYWORDS corn production / drought / soybean production
Order Reprints
No Comments
It’s time once again — an election year is here, which in turn affects the current administration’s decision-making process. In this election year, President Obama is unlikely to put himself in ill-favor of corn-growing swing states such as Ohio, Michigan and Iowa by doing anything that will depress prices.

A wobbly economy makes it hard to pass on rising feed prices to customers. In turn, livestock producers have a tough decision ahead as feed costs rise and help is limited.Some ranchers have already sent animals to slaughter, causing lower prices. Others are seemingly hanging on to their stock in hopes that the prices will rise again.

One area hit hardest by the drought is the U.S. Corn Belt, which provides over half the corn and more than two-fifths of the soy beans to world markets. I have just finished a project for an agriculture company with both animal feed ingredients and crop nutrients in their product line. This involved many hours of windshield time on many rural roads in Nebraska, Iowa, South Dakota, Missouri, Kansas, Wyoming, Montana and other Midwestern states. I have also interacted directly with cattle producers, farmers, their suppliers and agronomists. The drought is very severe and will affect both the farming community and animal livestock producers for the next 12 to 18 months.

Crops + drought = nothing good for many

The year started off strong, with near-record acres planted and early rains; expectations were high for a bumper corn crop. Coming after two years of marginal supply and high demand, prices were high. However, lack of rain has taken its toll. 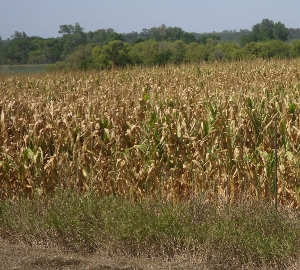 In Indiana and Illinois, many farmers have already cut most of their corn or plowed it under. I am told that approximately 90% of the farmers have invested in crop insurance. They may have a bad year but their bills will get paid.

In many other Corn Belt fields, the corn and soybean crop is at a critical juncture. Many experts say that the lucky farmers who harvest a crop will have dramatically less corn or soybean yield per acre. In the state of Nebraska, many farmers have very sandy soil, less rain, and a great aquifer. For those that have invested in irrigation, crops under irrigation look fair, whereas the non-irrigated fields are as poor as neighboring states. In South Dakota, North Dakota, Missouri, and Kansas, the mid-August downpours will not save the corn — that crop is gone — but it might reduce damage to the soybean crop as it is more drought-resistant than corn. There are, however, pockets in each of these states that look OK.

Based on the 2011 WASDE report, 40.6% of the U.S. corn crop went into making ethanol. In addition the U.S. exports more than half of the totalcorn shipments worldwide. Consequently,worries about the worst drought in more than half a century are impacting other countries. Buyers in predominant nations such as China are justifiably worried that the sharp drop in U.S. harvests will cause shortages and price spikes.

Greg Page, chief executive of global grains trading giant Cargill Inc, joined a chorus of critics of biofuels by urging the U.S. government to temporarily curb its quotas to produce corn-based ethanol fuel. Page said on CNBC that the U.S. biofuel mandate “needs to be addressed” through existing policy tools. Otherwise, the spike in U.S. corn and soybean prices to record highs will “ration” demand in ways that will hurt food production too much.

“If all of that is only on livestock or food consumers, it really makes the burden disproportionate. What we see are, 3 or 4 percent declines in supply lead to 40 to 50 percent increases in prices, and I think the mandates are what drives that,” Page said.

Demand for domestic ethanol corn has fallen since the end of June, dropping production nearly 15% due to the lack of profit in converting the expensive crops into ethanol and biodiesel fuels. However, according to the Renewable Fuels Association, research and RFA analysis state, “Some 2.5 billion ethanol credits, known as Renewable Identification Numbers (RINs) are currently ‘in the bank.’ These RINs were ‘banked’ in years past as refiners used more ethanol than was required by the RFS. Should ethanol production be short this year, refiners can use these excess credits to show compliance with the RFS. By substituting paper RINs for physical gallons of ethanol, demand for corn by ethanol producers would fall.”

The drought has also had a dramatic effect on cattle producers in Midwest and Pacific Northwest. While the traditional range acres are very dry in many areas, compared to last year’s conditions, this year’s drought is not as severe for the protein industry. Grazing conditions have actually improved in the southern Plains, but their stocking rates are below normal due to last year’s deficiency. Placements have shifted geographically based on the drought, with Nebraska being up 24% while Texas is 16% lower than last year.

Additionally, the drought has caused limited to no herd expansion this year in the U.S., despite cattle producers purposely trying to retain heifers. Long-term, this decline in heifers can be a good thing, but it creates a tighter supply of placement for cattle feeders. Southern U.S. feeders have been boosted by placement of Mexican cattle. However, as the Mexican cattle dwindle, the U.S. feeders could see a great tightening of their cattle supplies. In early August, Don Close, vice president, Food and Agribusiness Research and Advisory, Animal Protein, Rabobank International, offered his outlook for feeder cattle in a published report titled “U.S. Cattle Market Update: The Rain Isn't Falling, but Neither is the Sky!”

“Currently cattle feeders are losing in excess of $250 per head on unhedged cattle,” Close stated in the report. “The live cattle to feeder cattle swap is not offering anything much better. To date, the precipitous decline in feeder cattle values has totally been absorbed by the surge in feed prices.”

In summary, we can expect to see consumer costs go up across the board, from grain products to protein products, as this year’s drought has truly affected every industry in one form or another.

Just as a grassroots movement starts from a small group extending outward, so does a drought’s impact flow. Literally, with grass, corn, and other crops limited, feed prices will rise and protein will rise but historically won’t recover feed ingredient cost increase.

However, no two years are the same and we can only hope for a bumper crop next year to turn it all around!

State of the Meat and Poultry Industry 2019: Maze runners

Dan Emery has 25 years experience in the food industry, including 15 as vice president of marketing at Pilgrim's Pride. He is directing Meaningful Solutions, a company founded to assist clients in solving problems.

Dashboard dining: a permanent part of the American lifestyle

Opportunity with a side of restraint

The State of the Industry 2015: A tale of two horizons