The latest trends in MAP and overwrap packaging 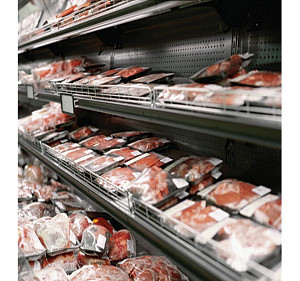 Usually discussions about packaging technology center on new advancements that have arrived or will arrive soon. Features are unveiled, and their unique processing benefits checked off and dissected. Less often, but perhaps more important, the conversation takes a different direction, to how packaging truly aids retail merchandising and addresses things important to shoppers.

Looking at modified-atmosphere packaging and overwrap packaging, little change has occurred in recent times. Broadly speaking, overwrap packaging is still the most common format in retail meat cases. Of course, much of that use comes from in-store packaging. In fact, according to most surveys, its dominance was slowly trending downward until a few years back, when some retailers of significant size and influence decided that the in-store wrapped look for certain key beef cuts was an important selling point for shoppers.

Perhaps it is a sign of the times, but modified-atmosphere packaging has not experienced much growth either over the past two or three years. An experienced observer of the packaging and retail industries senses that MAP may have seen a slight uptick, with some gains in ground beef, but otherwise it has been basically flat. It remains the third most-common packaging format in the meat case after overwrap and vacuum packaging.

There does not appear to be much to get excited over here. But circling back to shoppers and their interests, MAP seems to soothe a couple of important pains. According to a packaging industry source, the longer overwrap packages are in distribution or in the display case, meat purge tends to work its way over the tray lip and under the package.

Shoppers avoid leaky packages and those that appear leaky. They do not like how they look, and they certainly do not want to handle them. The hermetic seals of modified-atmosphere packages, if done properly, keep the packages clean and dry. Cross-contamination concerns are eliminated for shoppers and retailers, alike, and fewer products must be marked down, reground or thrown out.

But overwrap packaging's decades-long inertia continues on because it works. It is what has always been done, and moving away from it at anything more than a measured pace means change. And change is hard.

Successful change requires commitment to more than just switching packages. It means implementing education programs not only for shoppers, but for store personnel as well. The market is up to doing this. But realistically speaking, retailers have so many priorities to worry about, that if a package is not causing pain and it works, then change will happen when it does.

Tray sealing back on the rise

Barrier film technology has had quite a run

Contradictions in the casings market

Weighing: In search of an automatic solution

Chip Bolton is a principal at J.H. Bolton Communications LLC, with more than 20 years experience in the food packaging industry. For more information, contact him at (864) 525-3494, or chpbolton@gmail.com.