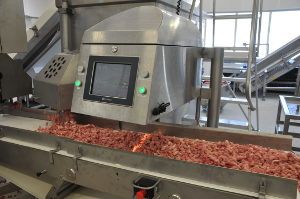 TOMRA Sorting Solutions is reporting a series of new orders for its QVision tool that allows meat processors to secure the maximum benefits available from in-line fat analysis and control.

Recent single European orders for the QVision Fat Analyzer system include two by sausage producers: Germany’s Eberswalder Fleisch, also a meat processor, and Greisinger Fleisch & Wurstwarenerzeugung, who will use the machine at its base in Austria.

Two US-based organizations will also see the technology installed soon. A ground beef and burger producer, which already owns one QVision unit, has requested another two. In addition, a major American case-ready beef producer will also invest in four analyzers, following its acquisition of a pair in 2012.

He explained, “Even with carcass classification, cutting patterns and employees possessing decades of experience, large variations in the fat levels of input meat are inevitable.

“But now, after many years of development, The QVision Fat Analyzer measures fat, protein, moisture and weight in fresh or frozen meat, at any grind size, across the full width of its conveyor belt, with analysis penetrating far into the meat.”

Hauge said with its accuracy, price point, ease of integration and ability to simplify production control, the system had the potential to make in-line fat analysis mainstream. Its capacity was unrivalled, as the machine could easily handle 30 tons per hour.

He said, “Through reduced lean giveaway, the QVision will help customers to get better yield from their raw materials, while ensuring consistent product quality. It is also less operator-dependent than other systems and eliminates the risk of ‘out of spec’ fat claims.”

He said, “Utilizing the QVision for traceability and quality control of raw materials can drive smarter purchasing and, for many customers, reduced time spent on correction and overworking will result in better utilization of production lines and improved quality. More and more customers are also finding great value in the monitoring and benchmarking the machine permits.”

TOMRA Sorting Solutions, a part of the publicly listed TOMRA Systems ASA, is a pioneer in sensor-based sorting solutions. The experience gained from more than 10,000 installed systems in the recycling, food processing and the mining industry plus the experience from 10 test facilities around the world, have led to significant advances in computing power, sensor technology and detection systems.

TOMRA Sorting Food designs and supplies high-performance optical sorters and graders, and peeling and process analytics systems, for the food market. Since 2012, ODENBERG and BEST, leading sensor-based food sorting systems providers, have joined forces within TOMRA Sorting Solutions, to form an acknowledged global market leader. The company now provides the widest segment and application coverage in the industry and has more than 6,500 machines installed worldwide. TOMRA Sorting Food also has eight test and demonstration centers worldwide, where customers can trial their own products on the TOMRA solutions.