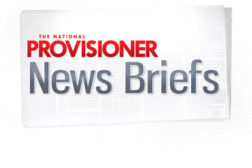 No Comments
The USDA recently released its 2012 crop report detailing the impact of the devastating 2012 drought. Officials have touted the biotech-enabled drought resistance of some crops—most notably corn—which helped some farmers save face last year. In fact, the report notes that we harvested 10.78 billion bushels of corn last year, one of the highest on record.
Read More

No Comments
Bloomberg Markets magazine is reporting today that, during a speech to attendees at the National Grain and Feed Association convention in San Diego in March, Cargill Inc.
Read More
Subscribe For Free!
More Videos

Check out the April 2021 edition of Independent Processor, featuring meat science education at the University of Wisconsin-Madison, ever changing regulations for small processors, moving beyond traditional peppers and spices, butcher tools and how to safely use them and much more!