Can heifer feedlot performance be controlled?

Investigating the influence of ovariectomization and ractopamine-HCl supplementation on heifer feedlot performance and meat quality.

In increasing world population, with estimates of more than 9 billion people by 2050, and a decreasing cattle supply necessitates the use of feed technologies to meet the current and future demand of beef. Feed additives, such as ractopamine-HCl (Optaflexx, Elanco Animal Health, Greenfield, Ind.), promote growth efficiency and lean tissue weight gains. The ability to take advantage of increased animal efficiency and lean weight gains can give the beef industry the ability to maximize pounds of beef produced to meet demands.

Beef produced from heifers (young female cattle) makes up a considerable portion (approximately 28 to 29 percent) of the total beef supply (ERS, 2014). Due to hormonal changes, heifers tend to be more variable in their feedlot performance than steers, especially when fed ractopamine-HCl (Quinn et al., 2008).

The routine procedure of ovariectomization (OVX; removal of the ovarian tissue) is one method to control the hormonal changes that add to heifer feedlot performance variability. However, ovariectomized heifers tend to have a decrease in weight gains and total performance efficiency when compared with intact heifers. Using anabolic implants has been shown to negate the decreased gains and efficiencies seen in ovariectomized heifers (Horstman et al., 1982).

At the University of Georgia, a study was conducted in a 2x2 factorial arrangement utilizing 48 British crossbred heifers to examine the effects of ovariectomization and ractopamine-HCl supplementation (0.41 mg/kg of body weight day-1) for the final 31 days (Figure 1). All heifers received an exogenous implant containing 80-mg trenbolone acetate plus 8-mg estradiol (Component TE-IH, VetLife, Overland Park, Kan.).

There was not a ractopamine-HCl by sex class (intact vs. OVX) interaction for any of the traits measured. Ractopamine-HCl supplementation resulted in increased body weight after 14 and 31 days compared with heifers that did not receive ractopamine-HCl (42 and 37 pounds, respectively). However, supplementation did not influence average daily gain, gain:feed or dry matter intake. There was no difference in feedlot performance between intact and OVX heifers.

Carcasses from ractopamine-HCl supplemented heifers tended to be heavier, have larger ribeye areas and have a greater dressing percent (1.2 percent) compared with carcasses from non-supplemented heifers. Ovariectomized heifers produced carcasses with a lower dressing percent (1 percent) and ribeye areas that were 0.9 square inches smaller compared with intact heifers. Calculated USDA Yield Grade, marbling score and carcass maturity scores were similar for all treatments. 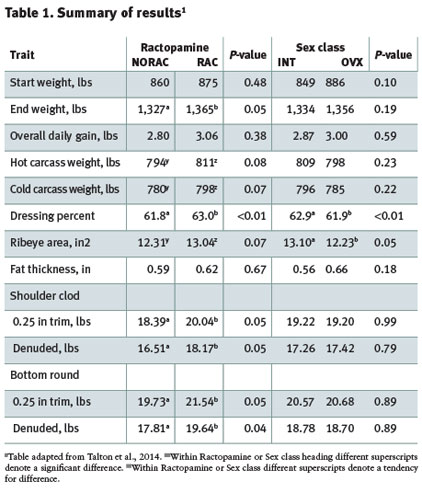 Alexander M Stelzleni and T. Dean Pringle are faculty of the UGA Meat Science Technology Center in the Animal and Dairy Sciences Department. The authors would also like to acknowledge Clay Talton, Josh Shook, Mel Pence and Gary Hill of the University of Georgia, and Chris Kerth, currently at Texas A&M University, for their contributions. For more information, contact astelz@uga.edu.

Alexander M. Stelzleni is with the University of Georgia Meat Science Technology Center, Department of Animal and Dairy Science.
You must login or register in order to post a comment.