When it comes to the development and merchandising of meat and poultry, big is not necessarily better. As protein producers increase the size of livestock to reap greater revenues from larger carcasses, retailers and shoppers must contend with larger cuts which in many instances carry higher price tags and affect the taste and visual appeal of products.

In the last 20 years, the average carcass weight has frequently increased in the double digits for pork annually and in the triple digits for beef, with today’s frequent 6- to 8-ounce chicken breast portions also much larger than a decade ago, says Dale Woerner, assistant professor at the Center for Meat Safety and Quality in the Department of Animal Sciences at Colorado State University, in Fort Collins.

“For more than two decades there have been increases in product size from all species, especially in the beef and pork middle cuts and chicken breasts,” he says, noting that because of economic issues, producers will likely never revert to developing smaller livestock. 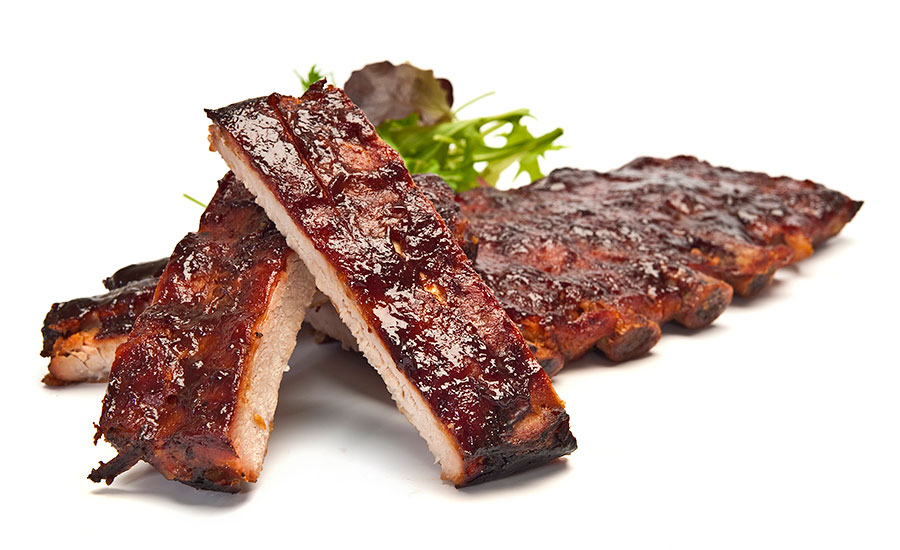 Some operators are responding by fabricating beef carcasses into individual muscle cuts, such as chuck eye rolls instead of chuck rolls and boneless ribs instead of bone-in ribs, Woerner says.

The most manageable way to downsize cuts is often with a knife, he states, such as by slicing individual muscles in half. Many of these muscles have grown in weight from about three quarters of a pound to a pound over the last decade.

Pork processors, meanwhile, are addressing size issues by developing smaller pork loin fillets, which provide consumers with a more attractive product from a size and flexibility standpoint, says Jeff Sindelar, associate professor and extension meat specialist in the Department of Animal Sciences at the University of Wisconsin in Madison.

“Shoppers have more confidence when they see a smaller 1.5-pound pork loin fillet in the meat case next to a 3- to 4-pound roast,” he says. “They can use the fillet as an ingredient as well as a center-of-the-plate item, which creates more willingness by shoppers to purchase the product.”

The many faces of portion control

Developing specific and smaller portions on a large scale, however, can force major changes in processor operations.

In addition to fabricating smaller fillets, many operators must also take steps to maintain uniform protein weights when forming patties and nuggets, as well as to ensure there is diameter control when slicing meats so products fit properly inside packages, Sindelar says.

Meat and poultry that is cut too large, for instance, will fold over or have a tight fit within packages, creating an unsightly appearance, he says. Pieces that are too small may result in packages with too much empty space, leading to purge runoff or package weights that violate regulatory guidelines by being less than the required amounts.

Without an effective and efficient portion control operation, processors also can generate excessive giveaway, in which the weight of packages are substantially greater than the stated amount, resulting in loss of revenue, he adds.

“It is impossible not to create some giveaway, but having very little should be the goal,” Sindelar says. “Processors must understand their equipment capabilities and the natural variations in raw materials that can impact portion control. Moisture, protein and fat have various densities and contribute differently to product weight.”

Portion control also is important for maintaining the integrity of meal kits, in which consumers receive packages that contain all the ingredients for a meal, says Kari Underly, principle at Range Inc., a Chicago-based meat and poultry marketing, consulting, training and certification firm.

Meal kits often contain two pieces of meat or poultry, such as pork chops or chicken breasts, in varying size and thickness, she says. The lack of uniformity can complicate preparations because cooking the items together may result in one or the other being overdone or not done enough.

Yet portioning is challenging because many processors must handle animals of random shapes and sizes, which can make it difficult to fit all meat and poultry pieces through the necessary machinery to create uniform pieces, she says. In many instances, processors will revert to cutting the pieces by hand.

“Operators should not be afraid to pull products off a line, go into the new product room and experiment with different slicing methods,” she says. “You are not going to mess up a chicken breast or pork tenderloin through trial and error because the items will still be tender no matter how you slice them.”

Most meat and poultry processors, however, will be slow to revise their operations to bolster portion control, Woerner says.  It takes a lot of money to develop new machinery and procedures, which expand the footprint of facilities and force significant downtime.

“A universal change in the way we cut beef or pork will cost hundreds of millions of dollars industry-wide,” he says. “Labor is also an issue as adopting advanced cutting strategies to get a more portioned product puts a huge demand on workers. It can be a grand challenge to get the skilled labor in today’s market.”

Processors, meanwhile, must also deal with the higher cost of producing cuts in smaller portions, Sindelar says. The expense results from having to buy more packaging for a greater number of pieces, developing and handling additional cuts and using more package labels.

Woerner notes that while “it is perhaps easy to think that the industry can adapt and start cutting smaller portion meat items, it is pretty ambiguous and almost unachievable with all the things that are involved, particularly in a short time frame with companies on limited budgets.”

Nevertheless, the need to develop appropriate portions for consumers and retailers will remain top of mind for many meat and poultry processors, he says.

“Beef, pork and poultry companies are doing research and product development to create different specifications for smaller portion cuts,” Woerner says. “But it is a very gradual change and will not happen overnight.”

By cutting meat and poultry into smaller proteins, processors can eliminate kernel fat, which will cause the products to appear more nutritious and of a higher quality, he says.

A bevy of benefits

Lundeen says the people most interested in portion control include consumers who are focusing on such elements as nutrition, healthy eating, waste reduction (by not having to put leftovers in the refrigerator and risk spoilage) and convenience, as well
as women.

“There is a subset of consumers who like the idea of not having to cut their meat into pieces and can just purchase that right amount to put on the plate,” he says. “Some people are willing to buy bigger cuts and portion the items themselves, but other folks like to be able to have the portion come right out of the package and go into the grill or skillet. Many consumers also like the way portions look. They are visually appealing and inherently feel right to them.”

“The reduced portions keep beef economical to the consumer, are in line with nutritional guidelines and help limit how much food they should eat,” he says.

Meat and poultry producers, however, will have little incentive to reduce the size of animals as the labor costs for slaughtering and fabricating livestock is virtually the same for an animal weighing 900 pounds or 1,400 pounds, Sindelar says.

But the insistence for processors to provide smaller portions will likely increase because of the ongoing shopper focus on health and convenience and the continual production of larger carcasses, he says.

“Larger family packs already are becoming less common in stores and the thickness of cuts are being changed to minimize weight or create a weight or price point that is more attractive for consumers,” Sindelar says. “Shoppers are looking at a product’s uniformity, quality, cost and value.”

Methodologies to address such issues will likely become even more prevalent, he says. Advancements are likely to include technologies to make it easier for producers to meet product size standards.

“Newer equipment has built-in scales that can automatically adjust to meet portion control specifications,” Sindelar says. “In addition, automated slicers will weigh meat slices as they are being cut and make finite adjustments to maintain a targeted portion size.”  NP

Meat Inspection and Control in the Slaughterhouse