The partnership between Coleman Natural Foods and Budweiser helps the meat processor reach a more mainstream audience with its higher-end product line.

In Spring 2019, a partnership between two well-known brands — Coleman Natural Foods and Budweiser, “The King of Beers” — materialized to create a line of cooked sausage and barbecue products aimed at the upcoming summer grilling season and beyond. Known as the Budweiser BBQ Collection by Coleman Natural Foods, the products feature Coleman Natural’s high-end, humanely raised pork sausages, St. Louis ribs and pulled pork, combined with the distinct flavor of Budweiser lager beer, to create heat-and-eat entrees that appeal to consumer demands.

In conjunction with the release of the product, Coleman Natural Foods invited Andy Hanacek, editor-in-chief of The National Provisioner, to Missouri to tour one of the many family farms that raise hogs for Coleman, as well as the monumental Anheuser-Busch Brewery in St. Louis.

During Hanacek’s visit, he sat down with the Coleman team to discuss the development of the Budweiser BBQ Collection by Coleman Natural, the early returns on the product line and the future plans for the partnership and Coleman in general. What follows is a portion of the conversation:

Hanacek: It has been roughly six months since the partnership between Coleman and Budweiser was announced, but what benefits has this product line brought to Coleman thus far? Have you met the early goals of the partnership thus far? 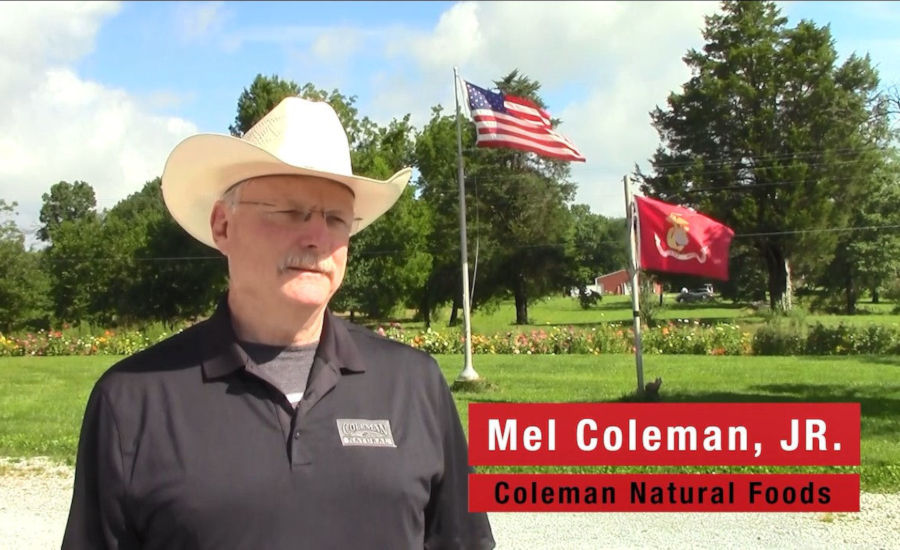 Bart Vittori, vice president and general manager, Coleman Natural Foods: It’s been a good experience so far for us since the rollout, but it will take time. The partnership has meant a further reach for us, into mainstream America, which is a major platform for us at Coleman. … We work along the premise that everybody in America, no matter what their situation is in life, should have access to good food — and we have to bring it to them not only in a sustainable system, but a cost-effective system too. Everybody deserves to bring home good food for their family. We want to play our part and give them a choice. Budweiser is a great partner for us. We’ve seen the success of the whiskey meats in the marketplace, and Budweiser itself is over twice the size of the entire whiskey industry. So, we expect to reach, once again, into more of mainstream America with the Budweiser partnership. There’s not a beer brand that resonates more in the United States when you walk through a supermarket or a store.

Mel Coleman Jr., vice president, Coleman Natural Foods: I think it’s a win for everyone: consumers, retailers, us and Budweiser. Budweiser is starting to get into the food category and chose us as a partner with experience, and leadership in the industry. At Coleman, we’re exploring not only new products but new, exciting ideas for consumers. This is a line that will bring a unique offering to a retailer’s barbecue category. And then if you look at the sausage category, sales have been flat to down. Our hope is this product line will help retailers increase the sales in that category.

Hanacek: So there have been sausage products that use beer as an ingredient launched in the past and still on the market today. There also have been what I’ll call co-branded products, where the beer brand was called out on the package for consumers to know that it was part of the ingredients. Given that, what makes this partnership different from what has been done before?

Vittori: One thing we wanted to make sure of was, when you look at our ingredient statement, one of the ingredients near the top of every single item is Budweiser American Lager. We’ve held true to that.

You have the beer, which gives a hint of the beer flavor — an iconic Budweiser lager beer taste — and the meat is a big, big upgrade over the commodity meat that’s out there. And we have attacked, again, a flat section of the retail meat case.

Coleman: It’s an extension of what Coleman was originally founded on: crate-free, no antibiotics, no growth promotants, vegetarian-fed. In the Coleman program, we partner with farmers and producers who raise livestock according to all of our protocols. Budweiser does basically the same type of thing with their grain growers. It has a very strict program to make sure that product that’s coming in to eventually be made into beer uses the best grain and best malt, resulting in high-quality products.

Hanacek: How did you go about picking the sausage and barbecue products that you chose to be part of this partnership?

Vittori: Who doesn’t love beer and barbecue? And who doesn’t love something they can just throw on the grill and have ready in a few minutes? People are looking more convenience and easy to prepare meals for one, two, or a crowd. So it made sense to develop a heat-and-eat barbecue-inspired product line. We had to make sure the product we were making made sense to complement a cold Budweiser as part of a meal. Ribs, pulled pork and bratwurst were an easy, grab & go choice to kick off the collection.

Hanacek: What are you guys working on with respect to extending the line? Who is driving the R&D on line extensions and future ideas?

Sarah Findle, marketing & communications manager, Coleman Natural Foods: Our relationship with the Budweiser team has been really great. We have monthly calls with them, and we’re going through some discussions right now about line extensions. We had them in the Perdue Innovation Center (in Salisbury, Md.) to test some things, thinking about what makes sense not only for us, but for them and their Budweiser customer. They’re very collaborative and want to be part of the process.

Hanacek: Again, although it is less than a year from the rollout, how has the product line resonated with consumers thus far?

Coleman: We are always looking at mainstream America and the consumers that we’re targeting. All of these items are heat and eat, so not only does it hit the person that’s looking for convenience, but these items span several different segments and different demographics. Even though this is going to mainstream retail, most supermarkets are expanding their natural and organic category, and we want to carve out that segment of that case and target those consumers that are looking for clean product.

I think the Budweiser brand will draw a part of the Baby Boomers and that generation, but the fact that it’s a clean product and we’re completely crate-free is very important with Millennials today. Our hope is that we will attract [all ages] and establish a strong presence because of those aspects.

Hanacek: So, talk about the differences in the size, reach and perceptions between the brand names — how did Budweiser choose Coleman and vice versa?

Findle: Yes, Budweiser is this brand that’s everywhere. But when you work with Budweiser as a partner, you realize how meticulous and careful they are with whom they associate the brand.

Vittori: They could have gone to any major meat company to partner on this, they would have the access. With our shared values, American heritage and focus on high-quality and great taste it just made sense on both ends. We’ve both been around for more than a century and are committed to raising the best ingredients and championing the American farmers behind them. They are the “King of Beers” and we’ve certainly seen the star power of their brand, but are really impressed by their intentional partnership with likeminded brands.

Hanacek: Operationally speaking, were there any changes that needed to be made? Any variations? Or is it just as simple as adding another ingredient to what you were already doing?

Findle: It’s getting the right balance of ingredients. You have to have the perfect balance of beer in food; it’s a very happy medium you have to find so one doesn’t overpower the other, but both flavors remain authentic. And luckily, both Coleman and Budweiser have been really happy with how well both ingredients work together.

Hanacek: What does this mean for Coleman moving forward? Does it signal anything bigger about the brand or the company?

Coleman: The first thing we’re looking at is, as we expand the Budweiser BBQ program into retail and get more shelf space, we want to put some complimentary Coleman Natural products in there too. Then, as Coleman begins to expand there, we will also expand into different species, such as grass-fed beef, for example.

Vittori: We just need to keep rounding out the marketplace with new items. As for the other species of proteins, we’re excited about exploring that, and bringing the same quality our customers have come to expect no matter the flavor, protein or packaging we offer. NP

‘Back to the Future’ with Ruiz Foods