Tradition with a twist: Younger families make their own holiday traditions with smaller portions, exotic meats and convenience.

“We’ve seen a real shift toward wanting to eat healthier, plant-based new entrees,” says Kit Yarrow, Ph.D., a San Francisco-based consumer psychologist and author of “Decoding the New Consumer Mind.” “But during the holidays, consumers look for what’s familiar — what Mom made, what they always had growing up.”

As much as we talk about the changing food culture, some things are very much the same. “And Thanksgiving dinner is one of those deeply rooted traditions,” says Anne-Marie Roerink, principal and founder of 210 Analytics, based in San Antonio, Texas. “The vast majority of consumers celebrate, and turkey is an integral part of the holiday. Other big holidays continue to see strong traditions in meat and poultry, as well.”

According to Technomic’s 2019 Center of the Plate: Poultry Consumer Trend Report, 45 percent of Millennials who eat turkey say they’re likely to purchase a turkey from restaurants or other foodservice locations for holiday meals at home, says Lizzy Freier, senior managing editor, Technomic, based in Chicago.

People love tradition with holiday meals. A mainstay meat such as turkey at Thanksgiving will always be offered. But the rest of the plate has plenty of room for nonmeat alternatives and vegetables.

“More flavor and spice are trending, as well as healthy, innovative options,” says Yarrow. “The health movement and innovation are here to stay.”

Children also get a lot more say today in what they want at holiday meals. “So, the holiday table may be set with a wider variety of choices, influenced by kids,” Yarrow says.

There is more experimentation in the holidays, much like we see in everyday cooking. “As Millennials are developing their own traditions, separate from their Gen X or Boomer parents, this will cause shifts both at retail and foodservice,” Roerink says.

Retailers, for example, offer smaller roasts and portions because consumers don’t want meat to dominate the plate. “For this reason, we’re also seeing more lamb and goat,” says Kari Underly, principal and master butcher at Range, a consulting firm based in Chicago.

Not all families want leftovers or to use every bit of meat and bones on their turkeys. “For convenience, shoppers can ask their butcher to debone their turkey, roll it and tie it ahead of time,” Underly says. “Another popular step is asking the butcher to take the back bone off the turkey so it lays flat and doesn’t dominate the whole oven.”

While traditions are strong during the holidays, Millennials in particular are looking for traditions with a twist. “This may be serving a combination of different meats, poultry and seafood, and even experimentation with exotic meats in combination with traditional options,” Roerink says.

Millennials may also serve their guests the traditional meat choice (turkey, ham, etc.) along with other exotic choices. “So, it’s not always about the whole bird or a 20-pound ham anymore,” Roerink says.

“Porchetta, pork loin with the skin left on, is a good dish for New Year’s Eve,” says Underly. “It can be seasoned with salt, pepper and fennel. The skin cooks into a crispy exterior so it becomes like cracklins,” she says.

Zampone’s sleeve of pork leg, which is popular in Italy, is another alternative for New Year’s Eve.

“NY strip steak is another nontraditional option during the holidays, because the price goes down at that time, while people buy rib eye and tenderloins,” Underly says. “But it makes a wonderful quick rib.”

As eating habits change, smaller portions are often more appealing and allow families to experiment with new proteins. “If families can’t handle eating the whole turkey, they can try poussin or Cornish game hens. Any birds from the local farmers market will have a much better flavor, including turkey, goose and poussin, which can handle a nice brine,” Underly says.

Pheasant and duck are other options for smaller appetites, she says.

“But we’re also seeing that this group has an interest in meat and poultry featuring production claims in their everyday purchases,” Roerink says. “During the holidays, they are interested in these same claims.”

Claims such as “raised in the U.S.,” “antibiotic free” and “all natural” don’t get a holiday. “Production claims have been driving above-average growth for meat for years,” she says.

Holiday meals: Made to order 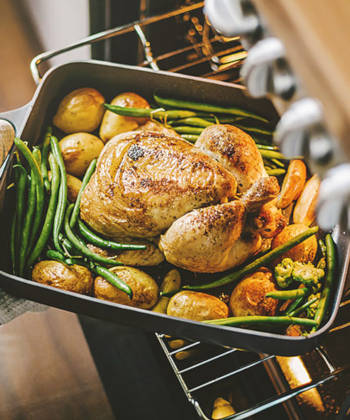 “Additionally, food, flavor and health preferences come into play, as well as the presence of children, etc.,” says Anne-Marie Roerink, principal and founder of 210 Analytics, based in San Antonio, Texas. . “Everyday traditions certainly play into holiday choices. This means virtually every restaurant type has opportunity during the holidays.”

Restaurants, however, may be missing an opportunity to promote turkey entrees during the holidays, as data doesn’t indicate an increase in purchases during November.

“I wanted to be able to say that we see a spike with turkey dishes in November, but there are so many other promotions, this does not really play out,” says Kelley Fechner, director customer solutions at Datassential, based in Chicago.

It is important to keep in mind that while the execution of holiday meals may be different among different cohorts, the importance of celebration and togetherness are universal.

“Re-creating those elements of the family or friends’ dinner in the restaurant setting is key to success, along with bringing in the traditional dishes that are so integral to the holiday celebrations,” Roerink says.

In addition, younger consumers may not have the necessary equipment to make traditional holiday roasts, says Underly. “So, they turn to pre-made or kits, or pick up food from restaurants to take home.”

However, “there are very few seasonal introductions in December and most of these are dessert related,” says Fechner.

Preparing meals ahead of time

What is also changing is that shoppers don’t automatically opt for the traditional route of preparing the meat at home, but rather order it pre-made or cooked.

“Many of these changes are driven by Millennials and the way they interact with meat in their everyday decisions,” Roerink says. “Even now, in their family-raising years, Millennials are still less likely to cook and over index for eating out.”

As such, Millennials are more likely to consider ready-made holiday solutions from the grocery deli or restaurants. “While still a very small share of holiday meal spending, it is an interesting opportunity for operators,” Roerink says.

“Millennials also make the conscious trade off to spend more time with family, than cooking the meal,” Yarrow says. “There’s wider acceptance on how to get the meal on the table today, and permission to do things differently. In the past, moms would have been viewed as lazy or bad homemakers.”

For those who enjoy making everything from scratch, many resources exist to teach them how. In fact, more cooking classes probably should be offered at retail to teach traditional cooking techniques.

“Plenty of people have joy around the idea of preparing food for their friends and family, but others prefer to order partial, semi-prepared meals at the store,” Yarrow says.

Among those who order catering for social occasions, 59 percent say they do so for holidays, says Freier, citing Technomic’s Catering Insights Program.

Regardless, this shift in environmental, innovation and role execution is long-lasting, says Yarrow: “These are permanent shifts, not fads. Every year, we will see more innovation in how people prepare for the holidays. Tradition is still a powerful lure. But consumers are open to more plant-based options and making room for innovative products, as long as they still feel like tradition.”

This combination of tradition and convenience is hardly surprising considering what is happening in everyday meat, poultry and seafood sales.

“Every form of convenience is growing dollars, from value-added (up 5.1 percent), fully cooked (up 2.5 percent), prepared meats in the deli (up 4.2 percent), frozen (up 2.2 percent) and meal kits (up 51 percent),” Roerink says. “Consumers are pressured for time and seeking quality experiences in their everyday dining.”

And while traditions are important during the holidays, convenience clearly matters, particularly to younger consumers. “And that quest for convenience and variety is likely to prompt more of the meals being ordered in, experimentation with holiday meal kits or even traditional meals eaten at restaurants,” Roerink says.

While that tradition is holding some sales patterns and choices in holiday meats, there are changes as well.

“Traditions are hard to break,” Underly says. “We pass on what our mother or grandparents did. But that being said, smaller portions or roasts are good ways to tweak the past.” NP

Holiday dinners: A twist on tradition