Change becomes the new constant for breaded and battered proteins

Novel ingredients that support consumers' growing interest in wellness and taste are becoming more prevalent in proteins with breading and batter.

Merchandisers seeking to retain or expand consumer purchasing of breaded and battered proteins face a conundrum.

Because large segments of shoppers seek products with different attributes, grocery and foodservice operators must determine the specific types of breaded and battered options — typically seafood and chicken — that will appeal to their unique customer bases.

That can include appeasing consumers who view conventional options as acceptable indulgences, responding to the growing number of wellness-conscious shoppers seeking healthier alternatives and catering to the many younger people who want selections with more exciting flavors.

“While batter and breading on chicken is evolving to meet the changing demands of consumers, there still is a loyal following of the tried-and-true taste and flavor of the traditional fried, bone-in, skin-on chicken parts,” says Tom Super, senior vice president of the Washington, D.C.-based National Chicken Council. “Finding the balance between satisfying the traditional food shoppers and attracting newcomers is part of the challenge of building sales volume for battered and breaded chicken.”

“If consumers can enjoy taste while managing improved nutrition, the product has double the potential for success,” Super says.

Keep the focus on clean

Breadings already feature more novel flours and grains in order to be gluten free, and product developers are replacing cornstarch with alternatives that have more of a health halo. Alternatives may include tapioca, potato and rice, says John Shackelford, corporate chef and research and development culinary manager at Giraffe Foods, a Mississauga, Ont.-based provider of private-label sauces, dips and dressings.

“People are becoming more and more conscious of their health,” he says. “They are watching calories and carbohydrates, seeking foods with cleaner ingredient decks and avoiding products with modified starch.”

Product manufacturers focusing on producing the healthiest options will need to eschew common ingredients such as phosphates and do a lot of research and trial and error to find alternatives that still create quality selections, Shackelford says. He notes, for instance, that more operators are replacing phosphates, which can help prevent water from cooking out of meat during both the manufacturing process and reheating by consumers, with plant-derived ingredients, including prune juice concentrate, which can retain moisture and help increase yield.

“Processors also should consider using new combinations of ingredients which might be more expensive that the traditional wheat flour and cornstarch that are used to create products, but can deliver the same texture and attractive flavor profiles,” he says, adding that operators should seek advice from their suppliers and product distributors who are often “ingredient experts.”

Yet, because most protein consumers still want their breading and batter to be “somewhat familiar,” many shoppers who are willing to try newer selections will accept only slight variations, such as having sorghum or potatoes replace cornstarch and wheat flour, Shackelford says.

The use of alternate ingredients, meanwhile, can be challenging for operators seeking to remove eggs from recipes to appeal to the vegan consumer, he says.

“There is a demand for product developers to find substitutes for eggs,” Shackelford says, “which is difficult because egg, flour, water and cornstarch all work very well together.”

It is important that consumers “feel better about what they are ordering” and that a push for products that appeal to wellness-conscious consumers is becoming increasingly relevant, says Maeve Webster, president of Menu Matters, an Arlington, Vt.-based food industry consulting firm.

“Consumers will view battered and breaded meat and poultry products less favorably unless operators address the health and nutrition aspects,” says Kenneth McMillin, professor of meat science in the School of Animal Sciences at Louisiana State University, in Baton Rouge.

That includes offering selections that are free of gluten and allergens and low in sodium, he says. Selections featuring salt substitutes, sea salt, flake rather than granular salt, spicier mixtures and oat or corn rather than wheat flour also need to be offered.

Merchandisers, meanwhile, can offer items that better appeal to taste-oriented shoppers by emphasizing different flavors, such as Korean or barbecue; providing selections with combinations of flavors, including sweet and sour and savory and sweet, for oven baking or deep fat frying; and using protein batters and breading that inhibit fat absorption on par-fried products, McMillin says.

Incorporating breading and batter on wider varieties of proteins and protein parts also is more likely to spark greater interest in the segment, he says, but adds that pinpointing the appropriate items can be daunting. “Chicken wings and tenders are already taken and pork or beef fritters seem to have limited appearance appeal,” McMillin says.

A major challenge for merchandisers is keeping the category fresh and interesting, Webster says.

“The breading and batter protein segment can easily seem very old fashioned: think chicken-fried steaks, or boring, with a wide variety of retailers and restaurants offering the same items,” she says.

But because it is important that the category remain appealing to a broad array of customers, merchandisers must offer quality selections that are not greasy or poorly made, Webster says. Newer alternatives such as katsu sando, a Japanese-style fried sandwich that typically features pork or chicken, are helping to add life to the segment, she says.

“Sauces, breading and battered flavoring, and applications like the katsu sando can help keep the category relevant and intriguing,” she says.

Along with tastier and healthier options, retailers are likely to generate greater sector activity by also merchandising wider varieties of frozen breaded and battered chicken patties, and that “creative” stores will cross-promote the products with special upscale buns at the in-house bakery, Super says.

In addition, he notes that air-fried chicken with lower fat and calories is likely to become more popular.

Super says retailers can better interest shoppers on newer options with in-store taste demonstrations, offering cents-off coupons in store sales fliers and by staging contests, which can include directing shoppers to register online for the chance to win a year’s supply of fried chicken.

While the breading and batter protein segment has ample growth potential, operators seeking to maximize revenues must find the right combination of product flavors, textures and alternates for traditional ingredients, Shackelford says.

“That includes the need to leverage replacements for modified cornstarch that will adequately bind batter to proteins throughout the cooking process and the refrigerated storage of products,” he says. NP

The ongoing popularity of battered and breaded proteins has triggered a steady stream of rollouts at major foodservice chains. 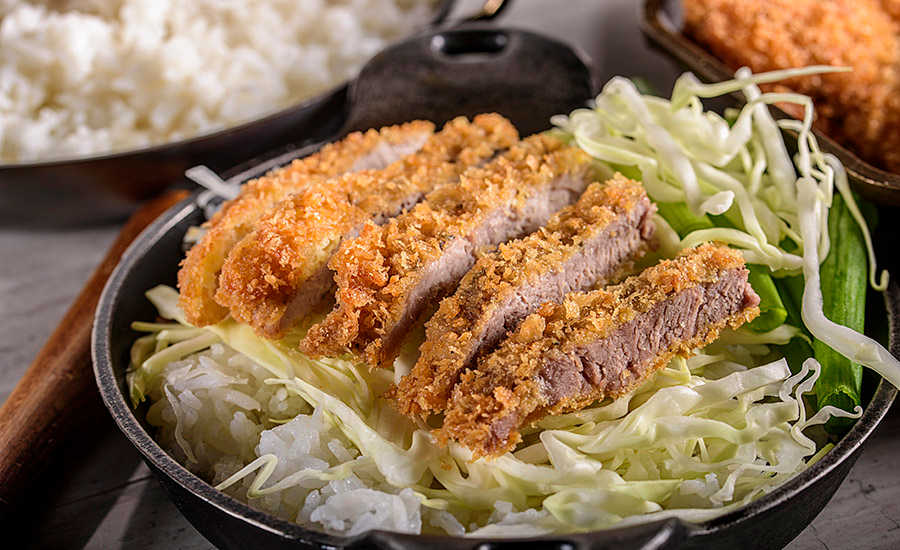 Popeyes Louisiana Kitchen, for example, recently was in the spotlight when it reportedly sold out a two-month supply of its new chicken sandwich in August in two weeks, forcing the chain to temporarily remove the sandwich from menus.

Research on purchase intent from Datassential, a Chicago-based market research firm, found the Popeyes chicken sandwich rated higher than 91 percent of the items in the firm’s database. The $3.99 sandwich features a buttermilk battered and hand-breaded white-meat chicken filet topped with two barrel-cured pickles and either classic mayo or spicy Cajun spread served on a buttery toasted brioche bun.

“If it tastes good, consumers will buy it,” says Kelley Fechner, Datassential director of customer solutions.

In addition, Datassential found Burger King’s Crispy Chicken Caesar Sandwich, which launched in August for $5.89, has a purchase intent of 79. The seasoned white-meat chicken filet is battered and breaded and contains lettuce, tomato, Caesar sauce, bacon and shaved Parmesan cheese on a potato bun.

Church’s Chicken’s Flamin’ Honey MegaBites, which launched in August for $3, has a purchase intent of 36. The white-meat chicken bites are hand battered and breaded, tossed in proprietary sweet and spicy seasoning and made with signature honey.

A growing presence on menus

Breaded items are found on 37.4 percent of foodservice menus, up 1 percent in the last year but down 2 percent over four years and 11 percent from 2009, Datassential reports. It also shows 67 percent of consumers indicate they either love or like the term “breaded,” and that 74 percent of breaded menu items are chicken and 23 percent are shrimp.

Battered options, meanwhile, are found on 25.4 percent of foodservice menus, up 2 percent both in the last year and over four years, and up 9 percent since 2009, Datassential reports, noting 61 percent of consumers either love or like the term “battered” and that 39 percent of battered menu items are fish, 32 percent are chicken and 23 percent are shrimp.