The Coronavirus pandemic has had an impact on every aspect of American life. Perhaps no other industry has been hurt as badly as the foodservice industry. Restaurants across the country have had to close their dining rooms, let staff go and face the prospect of surviving off curbside service or shutting down entirely.

As restaurants close or change their business model, the meat, poultry and seafood companies that once supplied them have had to change their business model as well. Two companies — Dole & Bailey of Woburn, Mass., and Farmers & Fishermen Purveyors of Norcross, Ga., have quickly converted their operations to a home delivery service, opening a new market opportunity for the future while keeping the business running in the present.

Kirk Halpern, founder of Farmers & Fishermen said that he could pinpoint Monday, March 16, as the day that the business changed. It was the day that the stock market dropped 2,000 points and people began to stay at home. Within a very short amount of time, 97 percent of the company’s business vanished as one restaurant after another closed.

“Some said we’re going to be going to curbside,” Halpern explained. “It’s one thing if you’re Longhorn or McDonald’s and your curbside, but who’s going to go do a $100 meal from their car?”

Halpern began formulating a new business model when he drove home. His wife had emailed her friends that she would sell them boxes of product for the “friends and family” rate. As he pulled into his driveway, Halpern saw her delivering boxes of products to multiple cars that had pulled up to pick up orders. The next day, he and the Farmers & Fishermen team worked out the logistics of the new business model. The company would start a home-delivery business, using the company’s fleet of Mercedes Sprinter vans. The model, as he explained, was a prehistoric rat, of all things.

“The way I explained it to people was, ‘Let me tell you who we are. So many millions of years ago, this asteroid hit the planet Earth. When it hit, there were these giant dinosaurs who ruled the earth. They all got wiped out. Who survived? It was the gnarly, nimble, prehistoric rodent. He was smart and fast, and he was able to move and adjust, and he survived,’” Halpern relates. “That’s who we are today. We’re going to emerge from this really strong, but the only way that we’re going to emerge is by two things: we have to be nimble, and we have to be perfect.”

Halpern sent a press release to local news sources and spread the word through social media. The company has been featured in Atlanta-area newspapers and on local television news. The resulting buzz has helped the delivery service get off to a very positive start. On its first day, the company made 38 deliveries. Within days, the number of deliveries had topped 130.

Halpern says that his company’s business infrastructure was ideal for home delivery. Farmers & Fishermen Purveyors started to meet the needs of the independent Atlanta chef. Large deliveries and mass quantities were never a part of the business model, so small quantities and multiple deliveries fit it well.

The types of products the company has offered have changed to fit the new audience.

“Prior to now, all my steaks were in 10-pound boxes,” Halpern explains. “A 10-pound box of fillets, people aren’t going to buy, so I’ll get them converted and I’ll go to a smaller, user-friendly pack size. Second, you have to change your descriptions from industry descriptions to descriptions that consumers will understand.”

The delivery system has changed somewhat. The drivers are required to wear gloves and masks to help keep the consumers at ease. The goals have changed, as well. Halpern says that the company’s motto used to be, “We’re chasing perfection.” Now, the delivery drivers have to be perfect, every time. So do the orders. The home delivery model is driven by positive social media reviews and good word-of-mouth. A negative experience could result in lost sales opportunities and a diminished reputation.

Halpern says that the home delivery service will remain a part of the company’s operations after people start to venture outside and life returns to normal. He sees ways to create synergy between the two models, as its chef customers could create recipes and blog posts designed for the home delivery customers. The consumers, then, become familiar with the chef and may be inspired to visit their restaurant.

Once things return to normal, there will be changes in the foodservice business. Halpern refers back to the Russian Tea Room, a famed restaurant in New York City for decades that foundered after the September 11 attacks in the city.

“It would have been less money for me to just shut everything down and wait. I’m doing all this because I want everybody to have a job. I want them to have a job, and a paycheck, and hope for the future,” he says.

A traditional food hub evolves
Dole & Bailey is one of the nation’s oldest meat processors, but the company has evolved many times to keep up with consumer trends. It has embraced the farm-to-table movement and has moved from a traditional meat purveyor to what it calls a “food hub,” supporting New England agriculture of all forms, from vegetables to beef to seafood.

Nancy Matheson-Burns, president of the company, said that the Coronavirus pandemic has led to further changes, as its restaurant customers altered their operations.

“From the start, our sales, purchasing, and marketing teams worked seamlessly to put into action creative solutions for every one of our business segments that remained operational,” she says. “We provided a menu of to-go focused proteins for our restaurants, and we ramped up our hours of operation with the USDA to serve our online retailers. Then we got to work on the new initiatives.” 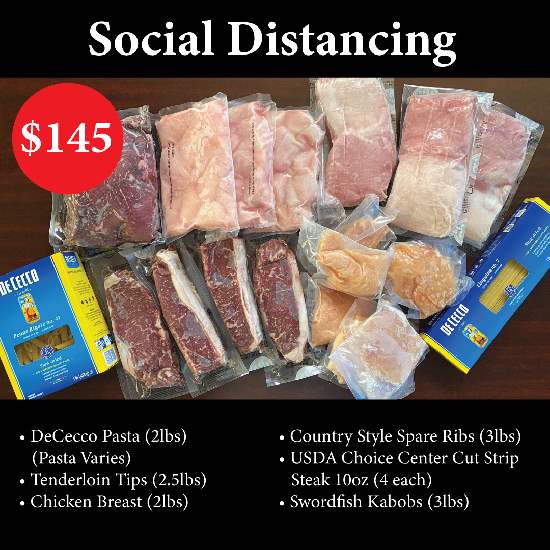 Within a couple of hours, she says, Dole & Bailey had a framework for a new home delivery program, shifting its focus from chef-centric items to home cooking. The new items were more flexible in application and packaged in more manageable sizes.

“We created meal boxes by breaking cases, offering smaller-quantity items that were better suited for the at-home chef, and launching distribution of them that afternoon through our local drivers and UPS,” she says.

The meal boxes feature meats, seafood, spices, cheeses and charcuterie items. For example, the “Slow the Curve” box contains 2 pounds of pasta, four center cut strip steaks, 2 pounds of chicken breasts and 2-1/2 pounds of ground beef, to name just a few items. The “Party by Yourself” pack includes a variety of gourmet cheeses, crackers and Citterio salami. Additionally, consumers can add to their packages ala carte from Dole & Bailey’s product catalog.

Matheson-Burns says that the company’s restaurant partners that remain open have reduced the size of their menu with a focus on items ideal for take-out. Many are partnering with Dole & Bailey to offer D&B Butcher Shop pop-ups. Dole & Bailey has been keeping customers informed about all shopping opportunities through its Facebook page, it’s been encouraging its followers to support local restaurants.

“Seeing consumers join with us to rally around the local restaurants by ordering take out and purchasing gift cards has been heartwarming. And don’t doubt the power of social media! Sharing photos of take-out meals and reminding others to support restaurants is an incredible way to help!” she adds.

This experience has been a trying time for most people throughout the country. Fortunately for Dole & Bailey, the company’s management team has a culture that is well-suited for fast decisions.

“Continuous improvement is ingrained in our leadership team. Together we address the new rules of engagement. We challenge each other,” Matheson-Burns says. “To our benefit, we are always looking ahead and seeking better ways to operate while discovering new opportunities to service our culinary community, so that muscle is always being flexed.

“Seeing our team come together, find creative solutions, and reinvent our business model in a matter of hours, has been crucial to the success Dole & Bailey has experienced these past few weeks,” she adds. “I have received hundreds of messages from customers new and old, complementing our professionalism, thoughtfulness, patience, and encouragement throughout this entire ordeal. All of us at Dole & Bailey are blessed and humbled to be viewed in our community as a beacon of light, hope, and sustenance, during these challenging days.”