This website requires certain cookies to work and uses other cookies to help you have the best experience. By visiting this website, certain cookies have already been set, which you may delete and block. By closing this message or continuing to use our site, you agree to the use of cookies. Visit our updated privacy and cookie policy to learn more.
Home » The challenges of reducing sodium in meat products
Meat and Poultry ProcessingIngredients
Tech | Ingredients

Salt contributes much to meat products — flavor, water-holding capacity and food safety. The top challenge for meat and poultry processors is that sodium comes primarily from the sodium chloride in brines, marinades and seasonings along with the leavening agents in batters and breadings and the sodium bicarbonate in bread crumbs. Additionally, sodium in products comes from the sodium nitrite, sodium ascorbate and sodium erythorbate in curing agents and cure accelerators, from preservative ingredients that are sodium acetates and lactates and the phosphates in water-binding ingredients. All of these sodium ingredients are essential for that particular application, says Kantha Shelke, food scientist and principal at Corvus Blue, in Chicago.

“Reducing sodium requires addressing the fundamental or defining functionality and often under cost and clean-label constraints,” she says.

Lynn Knipe, extension processed meat specialist and associate professor in Food Science and Technology and Animal Sciences at Ohio State University in Columbus, says clean labels are increasingly demanded by consumers, which limits the use of some ingredients, in replacing salt in meat products.

“Water-holding capacity impacts product texture and final product costs,” he says. “To replace salt in meat products, processors need to consider the consumer acceptance of the new product, the feasibility of using the new ingredients and the cost of making the change to the product.”

While sodium reduction is a major concern for processors, the bigger challenge is to do this concurrently with a reduction in fat.

“The combined reduction of salt and fat in meat products is a technological challenge because when both are reduced, water replaces the fat and affects several parameters like perceived saltiness, flavor, texture, water-binding capacity and the preservative effect of salt,” Shelke says. “This is further exacerbated by consumers wanting the resulting formulation to be clean label.” 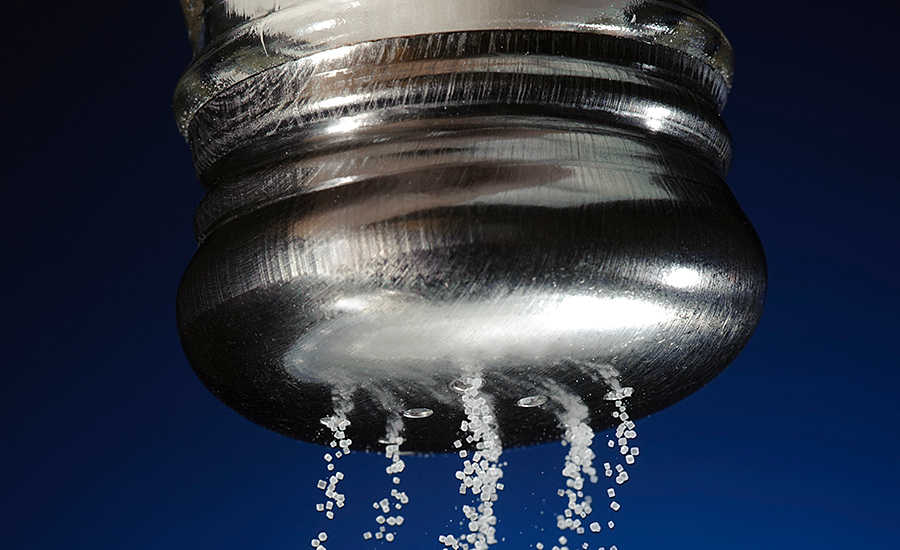 It is not easy to replace salt, because of its many functions, and multiple ingredients and/or new procedures are needed to compensate for a reduction in salt content. Knipe primarily hears discussions about reducing sodium in meat products by partially replacing sodium chloride with potassium chloride. “I have some issues with that approach, partly with the resulting increased potassium content and the potential metallic flavor problems with using potassium,” he says.

Other options are available for developing reduced- and low-sodium meat and poultry products. Using flake salt has been shown to have the same flavor and water-holding capacity at lower levels than traditional crystal salt, Knipe says. Additionally, sugars have often been used to mask the salt flavors in higher-salt products, so reducing these ingredients would allow sodium flavors to be maintained while reducing salt levels. Spice blends also can enhance the flavor of reduced sodium products, making the reduced sodium content less noticeable.

“The protein functionality of the initial lean meat ingredients should be maximized before a lot of additional ingredients are considered,” Knipe says. “Use of pre-rigor meat, preblending meat ingredients overnight, as well as vacuum mixing and stuffing will all improve the water-holding capacity, bind and texture of reduced sodium meat products.”

While phosphates are not desirable on clean labels, they are in Knipe’s opinion the most functional ingredient for use in meat products. “They work synergistically with salt to further enhance the functionality of both ingredients, so that less of both is needed when added together,” he explains. “Phosphates also increase pH of the meat mixture, which is helpful in making reduced-sodium meat products.”

A number of other non-meat ingredients could be used and would fit in a clean label, but these would be used to primarily boost water-holding capacity of reduced sodium products, Knipe says. “With these ingredients, the amount of water that each will hold in a meat product determines how much it costs to use that ingredient, but texture and flavor would need to be considered in addition to cost,” he says.

Combinations of the options will further increase the chance of producing a reduced-sodium product that consumers will want to purchase, Knipe says.

A new development in sodium-reducing ingredients is permeates, a co-product of the dairy protein industry. The minerals filtered out after proteins are concentrated have salts that function like salt in meat and poultry products, including sausages and deli meats. “They contribute minimally to the sodium content, are clean-label and may be labeled as dairy product solids in the ingredient list,” Shelke says.

“Processors would benefit from an inexpensive clean-label alternative to sodium that does not diminish taste, texture, safety or the economics of the product,” she adds. NP

Smithfield Foods commits to reducing sodium and sugar 10%, cleaner labeling across products by 2025