This website requires certain cookies to work and uses other cookies to help you have the best experience. By visiting this website, certain cookies have already been set, which you may delete and block. By closing this message or continuing to use our site, you agree to the use of cookies. Visit our updated privacy and cookie policy to learn more.
Home » 2020 Deli Report: Riding the COVID coaster
Meat and Poultry ProcessingDeliSpecial Reports
Cover Story | 2020 Deli Report

The COVID-19 pandemic is upending deli operations, but strong meat and poultry revenue opportunities remain for operators who adjust to the changing landscape.

The supermarket deli on a wild roller coaster ride.

After years of increasing revenues, prepared-foods activity is crashing as consumers switch to homemade meals as they seek safety and savings in response to the COVID-19 pandemic. Sales of grab-and-go lunchmeats, meanwhile, are skyrocketing as shoppers look to get in and out of stores quickly to avoid interacting with other people.

But the potential for healthy revenue gains in each sector remains strong. Deli operators, for instance, can attract more shoppers to the prepared-foods counter by leveraging newer recipes and merchandising techniques that create more excitement, says Chris DuBois, senior vice president of the protein practice for Information Resources Inc. (IRI), a Chicago-based market research firm. “Prepared foods has taken a monster hit,” he says, “and retailers have to make it a big deal for shoppers to visit the department as many previous customers are no longer used to buying the selections.”

Unique recipes are key to attracting consumers who might shop elsewhere, DuBois says. “Most retail entrées have gone unchanged for the last two to three years,” he says. “There is a need to create excitement with new options, which could include a twist on meatloaf or roast beef entrées. Shoppers are fatigued from cooking at home over the last four months because of the pandemic and tired of the same recipes.”

It is important, he says, for delis to consistently offer new options and frequently rotate the selections. “Just merchandising the same old things isn’t going to work,” DuBois says, adding that the deli is “ripe for reinvention” and operators should use “signage, sights and smells” to entice shoppers.

IRI research found 57 percent of consumers say unconventional flavors “are a good way to make everyday proteins exciting,” and 50 percent indicate that prepared proteins are a good way to try new flavors “without too much commitment.”

Deli-prepared operators, meanwhile, also will benefit from offering meat and poultry with the claims that are popular in the meat department, says Anne-Marie Roerink, principal of 210 Analytics, a San Antonio-based market research and marketing strategies firm. Such attributes can include organic, no antibiotics ever or grass fed, she says. 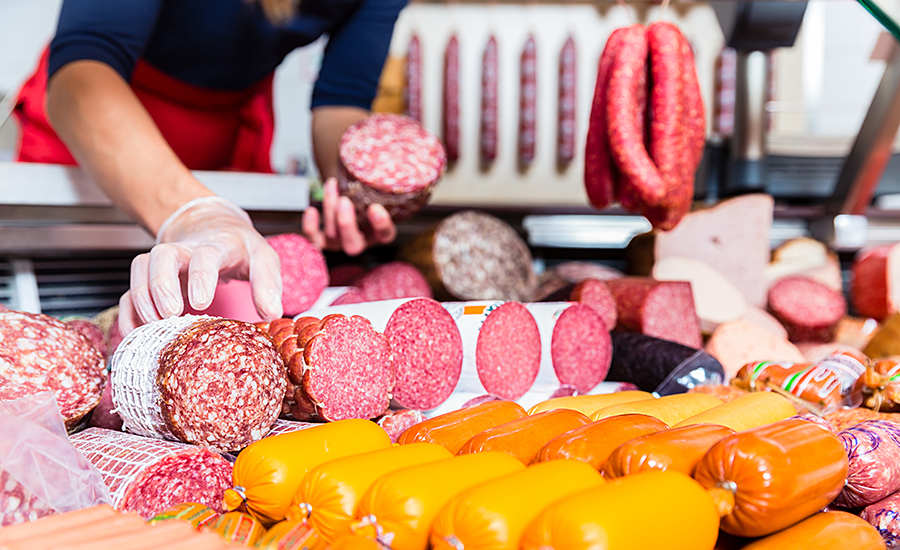 While grab-and-go sales of pre-sliced packaged random-weight lunchmeats are skyrocketing (IRI reports sales are up 61.3 percent for the week ending June 21 compared with last year and about 50.2 percent for the year), deli operators can still enhance activity by making selections more visible and attractive, DuBois says.

Methods can include situating cases near the middle of store where traffic flows are the heaviest, expanding the width of cases from 2 to 4 feet, having more stackable levels that provide the space for additional product varieties or offering higher quality branded packaging that is reusable, he says.

Source: Informatio Resources Inc. (IRI). The prepackaged category contains Universal Product Codxe (UPC) fixed weight products and includes third-party brands. All other categories are random weight and do not have a UPC. Year to date figures are as of June 21, 2020.

It is “variety that wins the game,” Roerink says, adding that it important for delis to offer wide arrays of meats in a host of package sizes to appeal to different household sizes.

Merchandising grab-and-go lunchmeats by package price, which might include $3 and $4 options, rather than weight, can drive further activity, says Jim Wisner, president of Wisner Marketing Group, a Lake Forest, Ill.-based retail consultancy. “It creates an underlying sense that it must be a good deal,” he says, adding that such pricing has been successful in bakeries.

It is essential, however, that the products are flavorful as well as convenient and affordable. This year, the Des Moines, Iowa-based National Pork Board (NPB) found 72 percent of consumers agree that delicious taste has a strong influence on their meat buying, and 50 percent of Generation Z consumers indicate that having their preferred “go-to” option available along with quick-to-prepare selections also were strong buying factors.

“Simple preparation has become more important than ever because of COVID-19,” says Jason Menke, NPB director of marketing communications. In a 2019 NPB study, shoppers consistently stated that having access to an approachable, friendly deli counter staffer to provide purchasing advice and recommendations enhanced their meat shopping experience, but that is changing, he says.

“It is now grab-and-go and how can I minimize my time in the store and get in and out with what I need,” Menke says, noting delis can become more relevant by offering additional convenience-oriented selections, including a variety of sandwich kits. 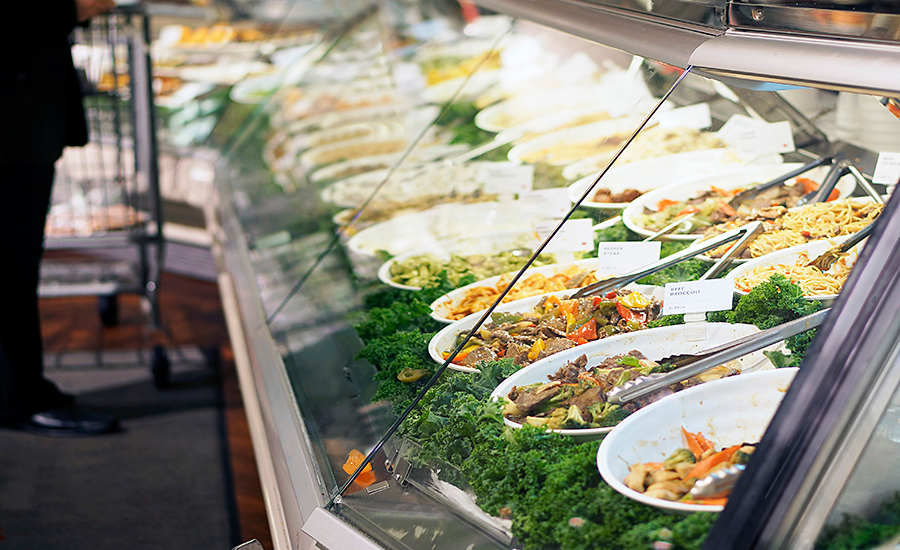 Get in line for online

The rise of curbside grocery pickup and home-delivery options also create potentially larger revenue opportunities. But many supermarket operators offer just a handful of deli proteins in their list of options, analysts say.

“Not being in the e-commerce consideration set was deli-prepared’s biggest issue prior to the pandemic,” Roerink says, “and it remains a problem, particularly because many shoppers are skipping the deli-prepared section in stores. Getting back on that dance card is step one.”

56% of consumers are trying to limit the time they spend in stores.

74% of consumers prefer to buy products with packaging that will protect the contents from contamination.

58% of consumers agree that they COVID-19 outbreak has made them worry about the safety of unpackaged food.

60% of consumers are concerned about who may have touched a product before they pick it up.

Tom Super, senior vice president of the Washington, D.C.-based National Chicken Council, agrees. “Delis must increase their exposure to the online customers,” he says. “Featuring daily delights and weekly wows to these shoppers can attract a second look at what’s special in the deli.”

Deli meat and poultry merchandisers also face the challenge of offering items that stand out from the newer and more attractive consumer packaged goods (CPG) offerings, Kamp says. “Before COVID-19, brands like Oscar Mayer, Smithfield and Hillshire Farm were releasing ‘carved’ and ‘delicatessen’ lunchmeats that rivaled the quality of the deli counter,” she says. “Those products are performing well and appealing to consumers who want the quality of the delis with the convenience of packaged options.”

The pandemic also is causing sales of deli trays of sliced meats or chicken wings to tank as fewer consumers host gatherings for birthdays, graduations, holidays and other celebrations, Roerink says. IRI reports that deli tray sales are down about 38 percent for the year. “It is important to remind people that the deli department can still make their lives easier and that there are solutions for smaller gatherings as well,” Roerink says.

Action is the answer

Additionally, retailers can position the deli counter as a “safer option” for meat and poultry purchasing than packaged items by highlighting how consumers will know who is handling their food, she says. 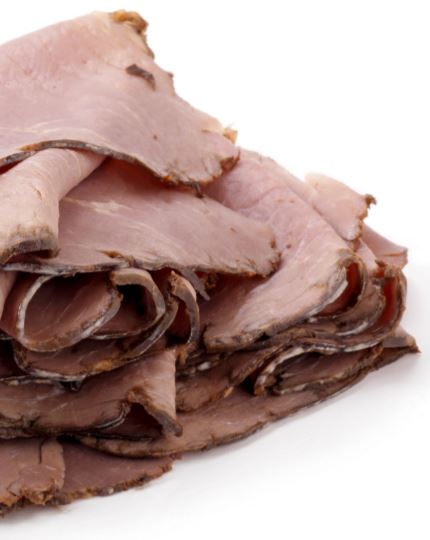 “The biggest challenge for delis is overcoming inertia, which means getting over doing things the same way we always did,” Wisner says. “There is a need for senior management to say ‘we will do game-changing things and not just make incremental tweaks.’”

Differentiation, he says, is essential for deli success. “Decide who you want to be and for whom and then figure out a way to proceed rather than doing what everyone else does,” Wisner states, adding that few operators research what shoppers like and dislike about the deli

Emphasizing the health attributes of sliced meat and poultry is among the initiatives that can generate strong returns, Wisner says. “Cold cuts are lean, all protein and full of B vitamins,” he states. “There are positive health and wellness stories to tell but few operators do so. The message doesn’t get out enough.”

Changing shoppers’ perception about the nutritional value of deli meats is a crucial step for growth, says Eric Mittenthal, vice president of sustainability for the Washington, D.C.-based North American Meat Institute. “Consumers are looking for more natural products with fewer ingredients,” he says. “The biggest hurdle is overcoming concerns about the way meats are being produced.”

Deli operators, he says, will benefit from instore signage that highlights the nutritional attributes of the proteins, such as being low in fat and sodium, and from selections that display the American Heart Association’s Heart Certification mark which indicates the item meets the association’s nutrition requirements.

Mittenthal also recommends merchandisers refer to processed meats as “prepared” because the term that generates a more positive reaction from consumers.

Think outside the box

Unconventional use of deli meats also can boost product interest, he says. That can include merchandising “beefshi” selections that feature such proteins as pastrami, roast beef, summer sausage, hot dogs, corned beef and bologna in traditional sushi type rolls along with rice and vegetables.

“Consumers traditionally think about deli meats in a context of a sandwich, but it is important to be versatile beyond the common uses,” he says.

Offering higher quality deli meat and poultry options, meanwhile, might induce shoppers to trade up, Wisner says, noting many consumers look for premium selections to eat at home rather than going out.

"Consumers traditionally think about deli meats in a context of a sandwich, but it is important to be versatile beyond the common uses.
-Eric Mittenthal, North American Meat Institute

Delis, meanwhile, are in position to help families conveniently pull together large meals instead of dining out, says Maeve Webster, president of Menu Matters, an Arlington, Vt.-based food industry consulting firm. Operators, for instance, can market packs of various sizes that contain meat and poultry along with side dishes, beverages and desserts, she says.

“Many shoppers have been eating their own cooking for much longer than they expected and boredom is bound to be an issue,” he says.

Roerink agrees: “Cooking fatigue is setting in and time-saving solutions are making a big comeback. Remind shoppers that they don’t have to make everything from scratch and that the deli can be a helping hand without breaking the bank”

Delis also should utilize meat and poultry packaging that enhances product shelf life and quality to help counter the popularity of frozen meals and entrées many shoppers have stocked up on in order to decrease store visits during the pandemic, Super says.

He says cross-merchandising deli meats with items from other fresh departments will help boost activity by giving shoppers more choices for meal customization than they would get from foodservice outlets.

It is essential, however, that deli operators adequately promote such selections, Wisner says.

“There needs to be more vehicles that explain and romance the products,” he says, adding that digital coupons, “which are absurdly easy to use but hardly anyone does,” also can be strong merchandising tools. NP