Prepared foods are becoming increasingly prevalent in supermarket delis as more consumers seek meat and poultry options that are quick, convenient and tasty.

The supermarket deli is undergoing a metamorphosis.

With time-conscious consumers increasingly seeking store-made meals that are fast and convenient, and retailers having limited areas in which to merchandise deli selections, more operators are enhancing and expanding their prepared foods sections while downplaying other offerings. It is resulting in a wider range of meat and poultry options.

“Consumers are looking for new flavors and excitement in their meals and they don’t want to put all the effort into preparation,” says Jim Wisner, president of Wisner Marketing Group, a Libertyville, Ill.-based food and consumer packaged goods consulting, research and education firm. “The one place to solve all of those issues is the deli, which is no longer an area for just cold cuts and cheese.”

As the deli steadily evolves, prepared proteins are becoming increasingly prominent as operators focus on becoming more formidable competitors of restaurants, he notes.

“The deli is the most exciting place in the supermarket and there is great opportunity for foodservice activities,” Wisner says. “It is also where we will see greater opportunities for the merchandising of meat and poultry.”

Prepared foods already are generating about 60 percent of total deli sales, versus approximately 20 percent for deli meats, according to Nielsen Fresh Growth and Strategy, a Chicago-based fresh foods research and consulting firm.

Most delis can offer prepared foods more cost effectively than restaurants because they are able to spread the overhead among all areas of the supermarket and capitalize on the greater volume, Wisner says.

“Deli operators also have access to products in the entire store and they don’t have to go through the whole development cycle to offer something new,” he says. “There is a more efficient labor, supply chain and preparation infrastructure in place.”

The battles are joined

In addition to competing with quick-service restaurants and other foodservice outlets, many supermarket delis also are siphoning business internally, particularly from the meat department, Wisner says.

“There is an evolution with activity moving from the fresh meat case to the prepared meals section of the deli,” he says. “Consumers are busy without time to cook so they are seeking the convenience of ready-to-eat meals and not have to worry about the cleanup.”

While many delis are expanding their selections of prepared meat and poultry, Wisner says the trend is still in the embryonic stage and will accelerate as the large base of Millennials, who range from their early 20s to mid-30s, “come into their prime purchasing age” and have more disposable income.

Deli-prepared offerings already are increasingly prominent and diverse. San Antonio-based H.E. Butt Grocery Co. (H-E-B), for instance, which operates more than 340 outlets in Texas and Mexico, is offering such items as Buttermilk Pecan Chicken, Grilled Marinated Flank Steak and Barbecue Smoked Brisket. Prepared meals at the company’s Central Market chain, many of which are prepared by chefs at in-store kitchens, have included such grab-and-go offerings as Home-Style Meat Loaf (featuring beef, veal and pork and a slightly sweet glaze) in a bag with Macaroni and Cheese, Steamed Broccoli and Dinner Rolls.

Among Wegmans’ initiatives are offering Chicken Parmesan and Chicken Marsala in an Italian Classics section of a hot self-service buffet; a Wing Bar that contains five types of chicken wings; a Dim Sum Bar with Pork Shumai, Pork Dumplings and Chicken Shumai; an Asian Wokery with Chicken Teriyaki, Lemon Chicken, and Hot and Spicy Beef; an Indian buffet with Indian Curry Chicken; and a full-service Burrito Station.

More shoppers also will pursue better-for-you meat and poultry selections, including proteins that are produced without the use of antibiotics and growth hormones, says Maia Chang, senior research analyst for Technomic Inc., a Chicago-based food industry research and consulting firm.

“As more people visit the prepared foods sections there is increasingly greater interest in product transparency and items with health claims,” she says. “Consumers want to feel safe about eating meat and poultry. They are going to expect such labels as ‘antibiotic-free chicken’ everywhere they go, including on value-oriented brands, as more restaurant chains follow the example of McDonald’s and Burger King and move to offer such items.”

McDonald’s Corp. announced in 2015 that by March 2017 it would stop using antibiotics in chicken production. Restaurant Brands International Inc. — which operates the Burger King, Tim Hortons and Popeyes Louisiana Chicken chains in the U.S and Canada — says it intends to switch to chicken raised without antibiotics by the end of 2018. 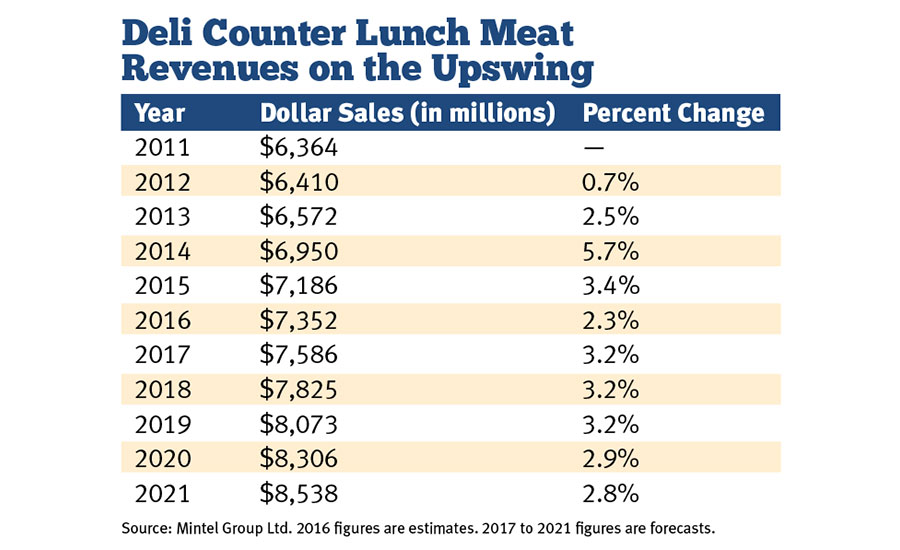 Revenues from deli-prepared foods, meanwhile, are in position to escalate as the dollars consumers spend on food they eat away from home for the first time is exceeding sales of items for at-home preparations, says Sarah Schmansky, director at Nielsen Fresh Growth and Strategy.

“The big challenge for deli operators is to continue to differentiate their prepared food offerings from restaurants and to have their stores stand out in the shopper's mind when it comes time for a meal,” she says. “Retailers must consider their meat and deli assortments, know the demographics of their consumers and offer what the customers can’t get outside of their doors.”

For deli-prepared food programs to thrive, operators must successfully manage a host of operating issues, including the need to consistently develop new meal concepts, Wisner says. “Many organizations get set in their ways and they don’t evolve as much as the market would like to see,” he says.

The frequent staff turnover inherent to delis, meanwhile, is creating food safety challenges as it’s critical that workers who handle fresh meat and poultry have the knowledge and skills to prevent contamination, Darr says.

Suppliers of ingredients for prepared foods often can train deli employees on the proper preparation techniques and instruct operators on how to best compete with foodservice outlets, he says, adding that more retailers are likely to recruit foodservice executives to oversee deli-prepared food activities.

In addition, it is essential that operators strongly promote prepared foods because there is an inaccurate perception that supermarket shoppers are captive customers who always visit the deli, Darr says. “Retailers must make the deli distinctive and attractive to drive traffic,” he says.

Deli operators also will profit by pricing prepared foods lower than the meals at nearby restaurants because many shoppers expect supermarket options to be more economical while having the same quality and variety as foodservice offerings, says Ann Golladay, Datassential senior product director.

Future deli-prepared food initiatives will likely include the launch of new and distinctive protein recipes, including selections that retailers source locally and are health oriented, she says.

In addition, more deli operators are likely to prepare foods in offsite commissaries in order to offer more meat and poultry options without taking up extra deli space or requiring additional in-store labor, she says.

“Such designations as ‘fresh’ and ‘made immediately on-site’ have a bit of a cache, but finding a balance where prep work can be done in offsite centralized facilities and then finishing the items on-site will result in less labor and space requirements,” Golladay says.

Running out of room

Limited space in delis has an impact on the amount of meat and poultry options retailers can offer, she says.

“Consumers want variety but there only is so much of a footprint and square footage in the prepared foods section,” Golladay says.

Managing space also will become more important as competition between traditional restaurants and the prepared food areas of supermarkets will “heat up,” Darr says.

“The only way to drive additional traffic to delis is by merchandising wider varieties of items and more interesting selections than those available at restaurants,” he says. “The prepared-foods area will move beyond the traditional rotisserie chicken, fried chicken and pizza, which have been mainstays for many years.”

Prepared foods containing meat and poultry, meanwhile, will play a more significant role in delis, Wisner says, with many operators expanding the number of food stations.

“The fastest growing part of the restaurant industry is in supermarkets and it will get bigger,” he says. “Operators who are moving more aggressively into the space are hitting more home runs.” NP