This website requires certain cookies to work and uses other cookies to help you have the best experience. By visiting this website, certain cookies have already been set, which you may delete and block. By closing this message or continuing to use our site, you agree to the use of cookies. Visit our updated privacy and cookie policy to learn more.
Home » Rumen microbiome impacts on adipose accumulation in steers
Meat and Poultry ProcessingBeefExpert Commentary
Tech | Meat Science Review

Microbiome research is an area of increasing interest in livestock production due to potential microbiome impacts on animal performance. The term microbiome, while scientifically rooted in the genetic makeup of the microbes, is used to more generally represent the microbial populations that are present in an environment. Cattle, for instance, have microbial populations in their rumens that degrade the feedstuffs consumed, producing nutrients that can be absorbed and metabolized by the host for production of meat, milk, and fiber. The amounts and types of nutrients produced by the microbial populations, and thus absorbed by the host can vary, however, depending on the composition of microbes present. This variation in nutrient production and absorption likely contributes to variation in animal performance, and while most rumen microbiome research has focused on live-production traits, an area of importance that has received little investigation is the relationship between the rumen microbiome and adipose tissue development in the carcass.

Beef cattle carcass value is influenced by the quality and quantity of meat produced, both of which are related to the fat: lean ratio. The difference, however, lies mostly in the location where fat accumulates. For instance, a major determinant of a beef carcass’ USDA quality grade is the amount of intramuscular fat deposited in the longissimus muscle, such that greater amounts of intramuscular fat are associated with higher quality grades (Prime>Choice>Select>Standard). In September 2020, Prime carcasses received a $12.17/cwt premium, while Select and Standard carcasses received discounts of $12.94/cwt and $26.77/cwt, respectively. In contrast, the quantity of meat produced, as estimated by the USDA yield grade, is largely influenced by the amount of subcutaneous and intermuscular fat, with less fat in these deposits being more desirable (1>2>3>4>5). Again, in September 2020, yield grade 1-2 and 2-3 carcasses were awarded a $3.79/cwt and $1.68/cwt premium, whereas yield grade 4-5 and 5+ carcasses were discounted by $12.00/cwt and $17.57/cwt, respectively. Ultimately, these trends suggest that high yielding carcasses with higher meat quality are desired, which means our goal, in terms of adipose tissue, is to produce carcasses with increasing intramuscular fat while minimizing subcutaneous and intermuscular fat.

Due to the economic relevance of adipose tissue accumulation and the influence of the rumen microbial populations on animal performance, we asked the following question: could alterations in the rumen microbial populations impact the energy substrates available, and thus carcass composition? To answer this question, we investigated the relationships between the rumen microbial populations and adipose tissue accumulation in steers that were divergent in their quality and yield grades. We used 24 feedlot-finished Angus steers that were slaughtered at roughly 18 months of age (weight following lairage: 1197±97 lb). At slaughter we collected rumen contents from each steer, which were later processed for microbial DNA extraction and 16S rRNA gene sequencing to determine microbial relative abundances and diversity. Carcasses were chilled for 48 hours before collecting a longissimus steak sample for proximate analysis, and carcass data for the calculation of USDA yield and quality grades. For analysis, we classified the carcasses with the 10 highest and 10 lowest marbling scores into high- and low-marbling classes, respectively. Similarly, we ranked the 24 steers by their USDA yield grades and placed the 10 lowest and 10 highest yield grades into the best- and worst-yield grade classes, respectively.

1Overall maturity was the average of bone and lean maturity 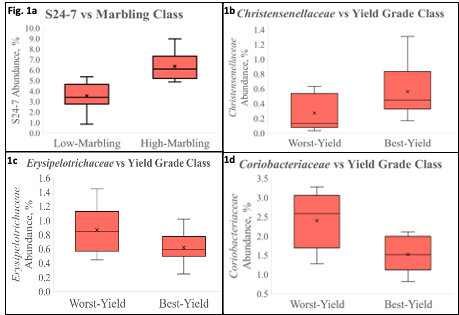 Profitability in the beef industry is heavily influenced by the quality and quantity of beef produced from a given carcass. Using the premiums and discounts mentioned above, the steers in the low-marbling class had an average carcass value of $1,335.69 compared to $1,438.37 for the high-marbling class, which equates to over a $100/head increase in value for improved carcass quality. Thus, every opportunity to improve both the quality and yield grades of beef carcasses at the producer level should be fully explored. Moreover, our results suggest that differences in ruminal microbial abundances and diversity are linked to differing performance in carcass adipose traits. Further investigation is needed, however, to explore the individual nutrient contributions of the microbial populations and how those nutrients impact lipid synthesis (intramuscular vs. subcutaneous fat) in the host. Ultimately, the goal is to better understand the microbes’ role in adipose tissue accumulation in anticipation of utilizing the microbiome as a means of improving beef quality and yield grades, and in the end profitability for the industry.

Taylor R. Krause is with the Animal and Dairy Science Department at the University of Georgia.

Jefferson M. Lourenco is with the Animal and Dairy Science Department at the University of Georgia.

Livestock production on point in 2020