Is temperature a selling point? It could be.

Prime, Choice, Select. Consumers are certainly familiar with USDA grades based on meat marbling, fat, and the animal’s age. But how many know about pH levels? Chilling methods?  Temperature?

Probably not many. Carcass chilling temperatures affect meat tenderness, juiciness, taste, and quality, which are determined by pH levels. A low pH can cause a lighter color and decreased water retention in meat, while a high pH has a darker color and less drip loss.

“In the United States, there isn’t a large focus on how the carcass is chilled, compared to how long the meat is aged, how much marbling it has, etc.,” says Chris Fuller, USDA meat consultant and processing plant advisor at Fuller Consulting, based in San Diego, Calif. “Other countries like Australia have pH standards and address how they relate to quality.”

So, pH drops faster in slower chilling methods for beef, and falls slower during faster chilling, according to Savell. Pork processing for that reason uses rapid chilling, minimal processing time, and no electrical stimulation.

“The market is so saturated with Choice, Angus, and Prime, which all have similar programs,” notes Fuller.“It would be great instead for beef producers to have another form of differentiation by offering information on their pH levels, chilling times, and temperatures.”

Chilling also plays an important role in the food safety of raw and ready-to-eat products.

“Carcass chilling systems that are designed with proper spacing and chilling capacity are important to control growth of pathogens like Salmonella,” says Robert Delmore, Ph.D., interim director of undergraduate programs and professor in the Department of Animal Sciences at Colorado State University, in Fort Collins, Colo. “Additionally, when we manufacture ready-to-eat products such as sausage and lunchmeat, we must have the ability to appropriately lower the temperature (chill) of the product to prevent the growth of Clostridium perfringens.”

Processors should also know how their carcasses are chilling — both on the external surface and the deep muscle temperature — using temperature probes, to prevent food safety concerns and meat quality issues, says Delmore.

“The biggest challenge with larger carcasses is the ability for systems to chill down to the center of the carcass,” Fuller says. “Plants are having to upgrade their systems to chill faster. And there are always challenges with condensation.”

Finished products today can be in a suspended state (not frozen but close) for 90 days, notes Fuller. “With high-tech systems, the temperature of rapidly frozen products can hold steady for six to seven months,” he says. “This extended shelf life allows for increased distribution to retailers.”

Meat companies can use freezing and chilling systems in a variety of locations in a processing line, such as grinders with a nitrogen injection system or an individually quick-freezing tunnel.

“We are lucky that we have a host of equipment suppliers that can help a processor determine where in the manufacturing process is the best location for a freezing or chilling system to meet their product goals,” Delmore says. “Grinders and blenders designed for chilling or chill tunnels are often important parts of large-scale patty production lines.”

Today’s larger animals lead to larger carcasses. “There is no doubt that the heavyweights of beef carcasses we have today (840 pounds and up) must be considered when placing carcasses in a hot box,” Delmore says. “Existing plants should work with their engineers to determine what is optimum for their facility when considering number of carcasses per cooler, spacing, and overall capacity of the system.” 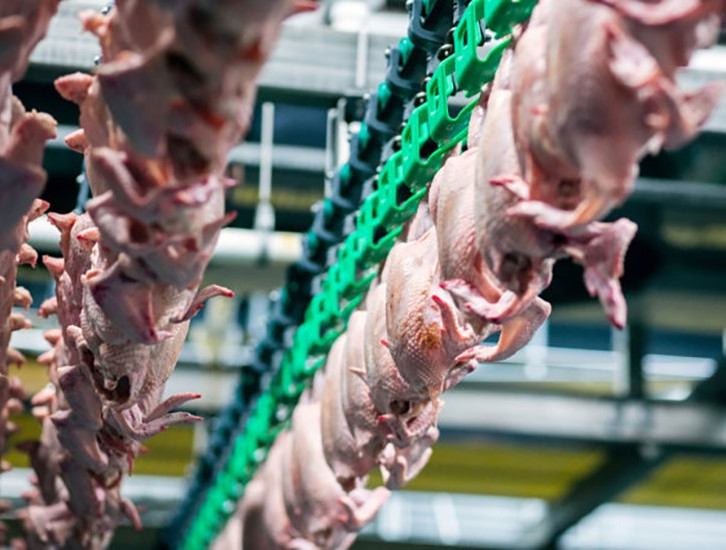 BY LAND OR SEA

Poultry birds are chilled with air or water chillers. The air-vs.-water debate continues today over which is most effective.

Air chillers individually chill each bird, while water tanks hold multiple birds at a time. Consequently, some say less bacteria can spread through air chilling, up to 80 percent less according to a University of Nebraska study.

“Time, temperature, and agitation define the chilling process for poultry,” says Mark Christie, Ph.D., director of process development and improvement, Simmons Pet Food, based in Siloam Springs, Ark., and former employee of a large poultry processor. “Both air and water chillers remove temperature; however, water chillers have a faster rate of heat transfer.”

In recent years, water-chiller technology has improved by adding a “rocking” motion to massage the bird carcasses moving through initial start of the chilling process. “The bulk of the moisture picked up in the bird is mostly around the skin and muscle; it’s not penetrating deep into the meat,” says Christie.

With air chillers, the air agitates the birds. Sanitizing agents are in the chilling water and can also be applied to birds as they leave the coolers further enhancing food safety.

Each system has its own costs. Expenses for water chillers include a higher water bill and labor for sanitation purposes if they don’t use Clean-in-Place (CIP) systems. Air chillers may lead to a higher power bill with their electric costs.

“You cannot say one is better than the other, based on energy costs without a full utility analysis,” says Christie. “Water chillers have a smaller footprint because of their faster temperature transfer, while more real estate is needed for air chillers.”

To that end, “I’ve seen that some European processors are spraying the air with water to help drive heat out during air chilling and reducing moisture loss,” Christie says.

Don’t give regulators a bone to pick

Zero tolerance in raw pet food: Is your T-Bone next?