State of the Industry: Chicken

The U.S. Department of Agriculture (USDA) estimates chicken production this year will reach a record high of 38.45 billion pounds on a ready-to-cook weight basis, about 1.7 percent above 2013, a percentage increase comparable to last year’s rate. Total U.S. broiler slaughter data for the week ending Sept. 20, 2014, was estimated by USDA’s Poultry Market News Service to be 160,134,000 broilers, no change from the same week a year earlier.

Current favorable market conditions would normally stimulate production to be somewhat higher, that is, a percentage increase more aligned with the long-run annual average of 4 percent. So why are chicken producers not stepping up production to better match the long-term average of 4 percent? We would if we could, but we can’t. We would like to produce more pounds of chicken, but unfortunately we are not there yet.

The primary reason for the industry’s inability to increase production can be attributed to problems caused by a failed policy that has been with us since 2006. The devastating impact of an inflexible Renewable Fuel Standard (RFS) for conventional biofuels, especially following the drought of 2012 which severely reduced the corn harvest, continues to have broad and deep ramifications.

Very high and very volatile corn prices even prior to 2012 — most notably in 2009 when chicken production decreased almost 4 percent for only the third year since 1950 — helped set the stage for the restrained production. Not only did chicken producers have to significantly adjust production downward to survive, but the negative economic ripple effect of an inflexible RFS caused the primary broiler breeders to significantly adjust their production downward. Broiler breeders also had to curtail their production plans for the future.

Primary breeders are the companies that are the lifeblood of our business because they generate the grandparents, great-grandparent and pedigree flocks. The primary breeders suffered significant financial strain during this time as orders for day-old pullet chicks were reduced or even cancelled by chicken producers who were confronting severe financial pain largely because of an inflexible RFS. It is taking the primary breeder companies time to rebuild their grandparent flocks, which produce day-old pullet chicks that mature in seven months into the mother hens for our chickens.

In time the primary breeders will generate larger, more sufficiently sized flocks. They will then be able to provide pullet chicks at a more normally expected rate. In turn, chicken companies will enlarge their hatchery supply flocks to better meet market needs. Until then, the chicken industry will continue to grow, but it will be at a more measured pace.

We are keenly aware consumers would appreciate increased chicken production. As cattle and hog producers confront their own challenges to produce more beef and pork, many consumers increasingly find chicken a favorable alternative. When the competition provides an opportunity to better compete, it is frustrating to find yourself in the position of “we would if we could, but we can’t,” especially when we hear, “It only takes seven weeks to grow a chicken.”

Industry analysts also point to a couple of factors that had an impact on this year’s broiler supply: some fertility issues earlier this year in breeder stock; and a very cold February 2014, coupled with a propane shortage that made it difficult to heat chicken houses. 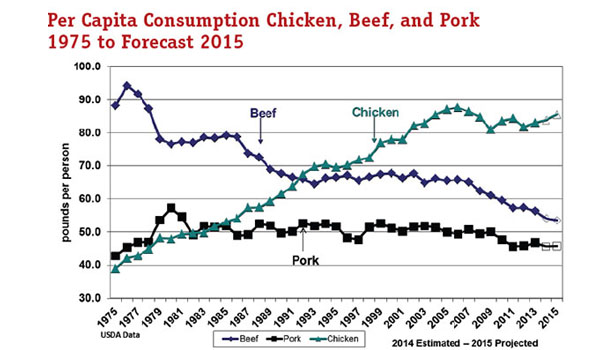 The good news is demand for chicken remains strong. According to new consumer research presented at the National Chicken Council’s Marketing Seminar in July, chicken consumption is up 17 percent. Overall, the average number of meals or snacks that contained chicken eaten by survey respondents in the two weeks prior to the survey was 6.1. This is up from 5.2, or 17 percent, from the 2012 findings. Millennial respondents (ages 18 to 34) remain the most likely to eat chicken meals or snacks frequently (7.7). The 12-month outlook for the grocery segment looks promising with a net of 24 percent saying they will be eating more chicken. This is more than three times the proportion previously noted. Turning to eating out, one in five (20 percent) respondents are likely to buy more chicken at restaurants and other foodservice establishments. This indicates a net gain in purchasing among 9 percent of the population.

Market analysts have estimated it could be spring of 2015 before chicken companies will be able to produce a material increase in chicken products. As agriculture economist Chris Hurt recently explained, favorable income prospects at that time will be based on feed prices resetting to lower levels, continued reductions in drought-affected pastures, strengthening of domestic incomes, rising per capita consumption, and growing export demand.  (U.S. exports of poultry for meat are projected to reach 3.4 million tons in 2014, up from 3.1 million last year.) 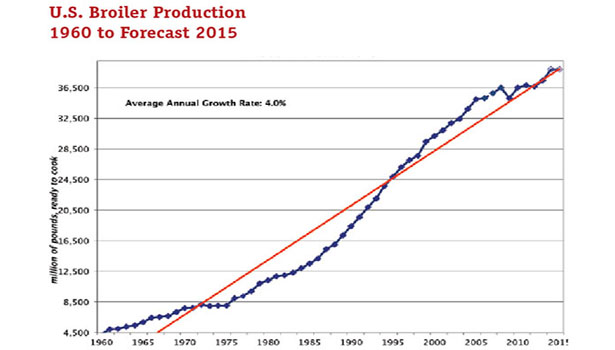 But with 40 percent of our corn crop still mandated to be blended into our gasoline supply, we’re at the point again where one extreme weather event could be disastrous for chicken producers.

In short, the state of the industry is good in terms of net margins, but it continues to be frustrated by the long-term effects of an inflexible renewable fuels policy and program. The often-dismissed fact, especially today as grain prices moderate, is that the RFS has inflicted deep and sustained damage to chicken production, and to consumers’ wallets.