Back to the basics of meat processing

As a meat processor, it’s not only important to know what you are doing, but also why you are doing it and how it works. Every ingredient added to a food product is done so for a specific purpose. Some ingredients act as a preservative and extend shelf-life, others are added as an antimicrobial to help prevent foodborne illness, and some ingredients are simply added to develop or increase a particular flavor profile. Non-meat ingredients can be as important, if not more important, than the meat source itself for both sensory and quality attributes along with shelf-life of the finished products.

Though fresh meat is composed of 70-75% water, adding water to a meat system can assist in the production of various processed meats in many different ways. First and foremost, water is a low cost ingredient that can significantly increase product yield. It contributes to the texture of products and aids in the release of flavor. Water helps to disburse dry ingredients and protein extracted during mixing, as well as acting as a solvent to dissolve or suspend phosphates, salt, curing compounds and other ingredients into solution. Lastly, water, specifically cold water and ice, can drastically affect the temperature of the meat during processing. Both grinding and mixing cause friction and generates heat. This increase in temperature can lead to fat smearing in the final product, broken emulsions and increase the potential for microbial growth. Maintaining cold temperatures by using cold water or ice will help prevent these quality defects from happening, as well as allow for longer chopping and mixing times, increase protein extraction and product consistency.

The first benefit of salt that probably comes to mind is flavor enhancement. Salt not only adds its own distinct flavor to meat products, but also greatly enhances other flavors from spices. The characteristic “salty” flavor comes from the sodium (Na+) ions in the sodium chloride (NaCl) molecule. The chloride (Cl-) ion is essentially flavorless. Consumers do not experience the same flavor profile with products containing potassium chloride (KCl) salt. Potassium (K+) can actually impart a bitter flavor if used in excess.

Meat protein can be categorized into 3 different classifications: stromal, sarcoplasmic and myofibrillar. Stromal and sarcoplasmic proteins encompass insoluble collagen and water-soluble proteins, respectively. Myofibrillar protein accounts for the salt soluble, contractile proteins actin and myosin. Chloride ions from salt increase the amount of net negative charge of the meat system. This ionic change alters the isoelectric point (pI) of meat. The pI is the pH value at which there is a neutral charge in the meat system. In other words, the amount of positive charges equals the amount of negative charges. The pI of fresh meat is around 5.2. At this pH, the ability of meat to hold and retain water is at its lowest . When salt is added to the meat system, the chloride ions cause the myofibrillar proteins to swell and repulse each other, creating space to uptake water and entrap fat particles. At the same time, the chloride ions increase the amount of negative charge and increase the ionic strength (the concentration of positive and negative ions in a solution) of the whole system. This causes the isoelectric point to shift, thereby increasing the water holding capacity of the meat. In the graph below, the pI of meat changes from 5.2 to roughly 4.8 with the addition of salt. This greatly increases the water holding capacity of fresh meat at its normal pH of 5.6. (see IMAGE 1) 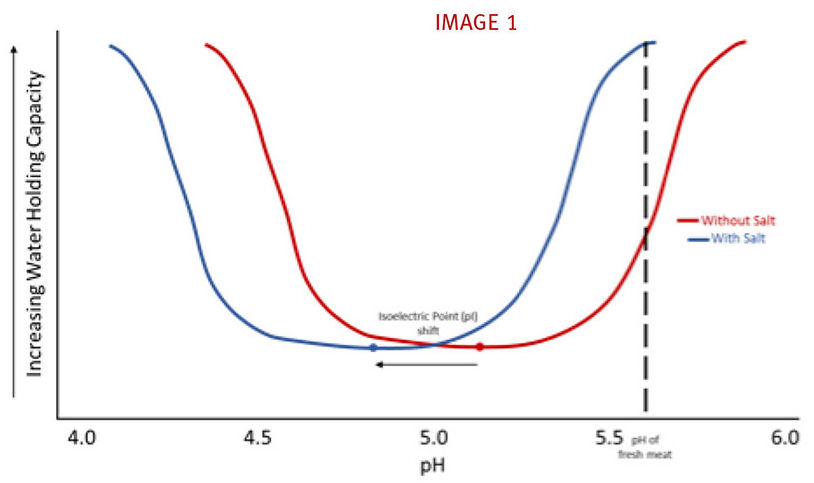 This extraction of protein is easy to observe; look at how sticky and tacky ground beef becomes when mixed with salt versus unsalted ground beef. This difference in observed texture is due to the extracted myofibrillar proteins. Increasing salt in a formulation will increase the amount of myofibrillar proteins extracted and thus, increase the water holding capacity of the meat.

Lastly, salt can help to control the growth of microorganisms in meat products. When salt is added to meat, it changes the environment for bacteria, causing some to slow in growth or die, while others may continue to grow and thrive. This is known as a “microbial inversion.” Bacteria, like Escherichia coli (E. coli), Salmonella species, or Campylobacter jejuni, in general do not thrive in salty environments. In contrast, microorganisms like Staphylococcus aureus, Listeria monocytogenes, Clostridium botulinum, and Clostridium perfringens can survive and even grow in these conditions. Salt has also been shown to slow the growth of several species of spoilage bacteria and have a cooperative interaction with nitrite.

Nitrite (NO2-) is a very important antimicrobial that inhibits the growth of Clostridium botulinum, a bacterium found in the environment that can form endospores to survive harsh conditions like cooking temperatures. This anaerobic bacterium also produces an extremely potent neurotoxin that, if ingested, causes symptoms ranging from blurred vision, nausea and vomiting, to paralysis, respiratory failure and even death. Nitrite is both highly effective at inhibiting C. botulinum at low concentration and has a synergistic antimicrobial effect when combined with salt and other reducing agents (e.g. lactate, erythorbate, diacetate). Nitrite also contributes to the familiar cured meat color, flavor and texture to processed meat products, and nitrite also works as an antioxidant by decreasing lipid (fat) oxidation. It is such a unique and important ingredient, that its effects cannot be reproduced by any other compound(s).

Before going any further, the difference between nitrite (NO2-) and nitrate (NO3-) needs to be explained. The sole purpose of sodium or potassium nitrate is to act as a reservoir for nitrite. Nitrate is converted to nitrite through the chemical equation below.

The conversion of nitrate to nitrite is known as a redox (short for reduction-oxidation) reaction. This chemical reaction involves the transfer of electrons between two species. When electrons are lost it is called reduction while gaining electrons is called oxidation. As NO3- changes to NO2-, the negative charge changes from 3- to 2-. This decrease in negative charge indicates an electron was lost, meaning a reduction reaction occurred.

The nitrate-to-nitrite reduction step is achieved by micrococcus bacteria that produce the reductase enzyme. This conversion step takes time, and the amount of nitrate reduced can vary with the efficiency of the reductase. With this variability in production, direct addition of nitrite is more commonly performed in the production of cured meat products, which allows for a more accurate addition of the ingredient. Recently, the popularity of “uncured”, “organic” and “natural” processed meats has increased. Although these products are marketed as “uncured”, many of these niche products actually contain natural sources of nitrate, such as celery, beets, or other root vegetables.

The conversion of nitrite to nitric oxide can be catalyzed by decreasing the pH (either through fermentation of by adding acidulants), adding reducing agents (more below), adding salt or by processing the product under vacuum. Nitrite can react and bind to oxygen, making it unusable. Keeping it in an anaerobic (no oxygen) environment will prevent this. All of these ingredients and techniques will ensure that the least amount of residual nitrite is leftover and that you are converting as much nitrite to nitric oxide as possible.

The signature color associated with cured meat products comes from the reaction of nitric oxide with the protein myoglobin. A close relative to hemoglobin (the protein associated with carrying oxygen through the bloodstream), myoglobin works by binding iron and oxygen in muscle tissue. As meat is exposed to different levels of oxygen, myoglobin changes configuration and ultimately changes the color of the meat as shown in the figure below.  (see IMAGE 2) 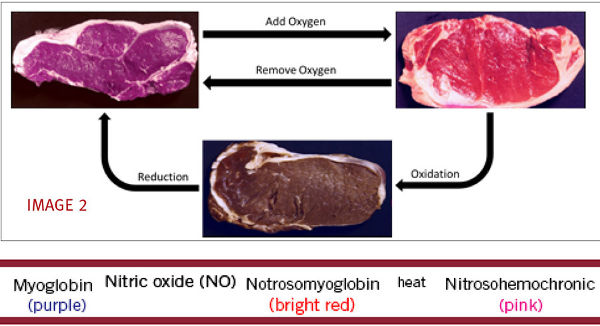 When myoglobin reacts with nitric oxide, the meat becomes a bright red color and then, when heated, changes to the well-known, pink cured meat color; the chemical reaction is shown above.

Although the flavor associated with cured meat products is not well understood, it is a very important contributor to cured meat flavor, for example the delicate flavor profile of cured hams. Much of this flavor profile is thought to be associated with the strong antioxidant activity of nitrite. When nitric oxide is bound to myoglobin, it blocks the interaction of protein with oxygen, which, in turn, helps to preserve the flavor.

As previously discussed, cure accelerators are additives that quicken the conversion of nitrite to nitric oxide. Hastening this chemical reaction will help to prevent the formation of uncured, “gray” pockets in hams and other thick products, improve flavor and color stability, and increase shelf-life. There are two main types of cure accelerators: acidulants and reducing agents. Common acidulants include: fumaric acid, citric acid, sodium acid pyrophosphate and glucono-delta-lactone. Examples of reducing agents include: ascorbic acid (vitamin C), erythorbic acid, sodium ascorbate, sodium erythorbate and cherry powder (a natural source of ascorbic acid). Both types of accelerator ingredient will begin to react with nitrite immediately upon contact. It is important to limit exposure of these ingredients to one another until desired for use in the meat system. 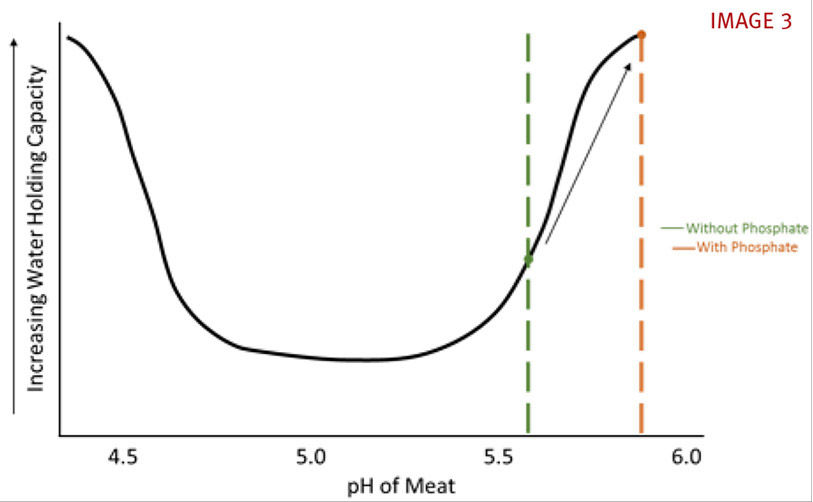 However, this increase in pH can also slow the development of cured meat color by affecting the conversion of nitrite (NO2-) to nitric oxide (NO). Adding cure accelerators and acidulants (see previous section) can offset this unwanted effect.

The other major function of phosphate is to solubilize protein. Like salt, phosphate affects the myofibrillar proteins actin and myosin. During rigor mortis, as muscles tighten and contract, actin and myosin bind together and form strong protein cross bridges. Phosphate (PO43-) ions increase the ionic strength of the meat and work to release these cross bridges, causing the proteins to swell and expand. This swelling creates space to bind and hold water, fat and other proteins. The increase in water holding capacity and solubilized protein increases product yield by decreasing the loss of water from purge and cooking.

Phosphates can be difficult to dissolve or suspend in water, especially in brine solutions. By adding phosphates prior to the addition of other ingredients and by using high speed blending, processors can better suspend phosphates into a brine solution. You can also dissolve phosphate in a small heated portion of your cold mixing water, or, although more expensive, use pre-blended liquid phosphates. Most phosphates are more attracted to salts, like sodium or potassium chloride, than to water. If phosphates are not fully dissolved before salt and other ingredients are introduced into the brine, the salt and phosphate will repel one another, causing the phosphate to fall out of suspension and settle to the bottom of the mixing container. Water hardness can also have a negative impact on the solubility of phosphates.

Phosphates can vary in their chemical structures, which can alter the functionality of the ingredient. It is very important to know this information when selecting phosphates for your products. Adding too much phosphate can result in a soapy or detergent-like flavor in your products.