This website requires certain cookies to work and uses other cookies to help you have the best experience. By visiting this website, certain cookies have already been set, which you may delete and block. By closing this message or continuing to use our site, you agree to the use of cookies. Visit our updated privacy and cookie policy to learn more.
Home » Beef production technology and its effect on consumer preference
Meat and Poultry ProcessingBeef
Meat Science Review

Beef production technology and its effect on consumer preference

Growth-promoting technologies such as anabolic implants, ionophores, antimicrobials and beta-agonists are commonly utilized in beef production to maximize efficiency. Gains in efficiency resulting from the use of these modern technologies contribute to the global goal of producing more food with fewer resources for a growing population. Research has demonstrated the improved environmental sustainability of integrating growth-promoting technologies, but the influence of these technologies on beef palatability is mixed. Further, consumers increasingly demand beef with credence attributes such as, “beef produced without growth enhancement technologies.”

Given this dichotomy between improving resource management and decreasing the use of technology, it is critical to understand the influence of different production systems on measures of sustainability, meat quality, and consumer preferences for beef. Therefore a recent study funded by the Minnesota Beef Council was conducted to 1) evaluate meat quality characteristics, and 2) identify consumer palatability and label preferences for beef raised in different production systems.

Crossbred steers were assigned to four treatments prior to weaning: 1) NA, no technology utilized (control); 2) NHTC, non-hormone treated (fed tylosin and monensin during finishing); 3) IMPL, implant (administered a series of three implants and fed tylosin and monensin during finishing); and 4) IMBA, implant plus fed a beta-agonist (same as treatment three plus, fed ractopamine – HCI for 31 d prior to harvest).

Steers were harvested at a similar back fat thickness (0.6 inches) and striploins were collected and fabricated into 1 inch steaks. Steaks were allocated to ensure that the same consumer panelists received sensory samples from the same location of the striploin of the same carcass. Steaks from the opposite striploin were aged for 14 d prior to freezing for Warner Bratzler Shear Force (WBSF) analysis. Steaks were cooked to a medium degree of doneness (160°F), trimmed of external edges, connective tissue, and portioned into samples (0.5 in x 0.5 in) for consumer panels. One hundred-five panelists were provided two sensory samples per treatment and instructed to cleanse their palate between each sample during three consecutive panels:

Panelists were fed repeated samples of each of the four treatments in a manner such that each sample was compared to all others. Panelists were instructed to select their most- and least-preferred sample among three sensory samples per plate. During the two disclosed panels, production descriptions were also provided so that panelist could understand how the cattle were raised in each production system as follows:

Consumer selections of each sensory sample were analyzed to determine the likelihood of each treatment’s preference percentage among all consumer responses (Figure 1). 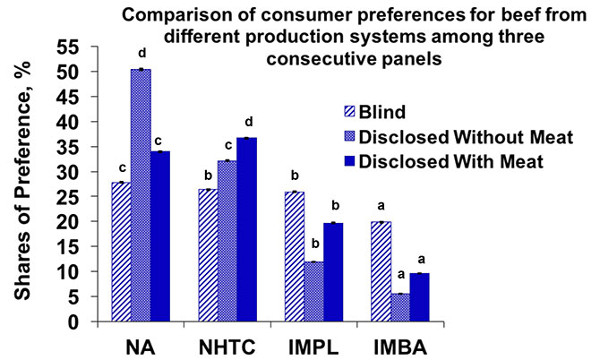 Figure 1. Influence of pre- and post- production information on consumer preferences for beef palability. Treatments includee a control group where steers were provided no technology (NA); steers provided tylosin and monensin (HTC), a series of three implants, tylosin and monensin (IMPL), or a beta-agonist, three Implants, tylosin and monensin (IMBA). Bars within panel signify simulated shares of preference from 1,000 observations drawn from multivariate normal distribution parameterized using the coefficients and variance-covariance terms estimated by a random parameter logit model in SAS MDC. Standard error is indicated by error bars and percentages without a common letter within panel differ (P ≤ 0.05).

Overall, treatments utilizing growth promoting implants with and without beta-agonist decreased meat tenderness, which may be detectable by untrained consumer panelists as NA and NHTC treatments captured greater consumer shares of preference in both blind and disclosed panels. When production information was disclosed and palatability was assessed, NHTC was the most preferred followed by NA and indicates that when information is provided consumers are accepting of meat from an animal that may have been treated with an antibiotic in the event of illness. Label claims and statements indicating optimal antibiotic use during illness to improve animal health may have industry application. NP

This research was funded by the Minnesota Beef Council.