This website requires certain cookies to work and uses other cookies to help you have the best experience. By visiting this website, certain cookies have already been set, which you may delete and block. By closing this message or continuing to use our site, you agree to the use of cookies. Visit our updated privacy and cookie policy to learn more.
Home » Golden State Foods cuts ribbon at new Alabama facility
Meat and Poultry Industry News

New 160,000-square-foot plant in Opelika, Ala., will produce fresh and frozen burger patties.

After four years of planning and construction, Golden State Foods (GSF) officially opened its new 160,000-square-foot processing plant in Opelika, Ala. The plant will produce fresh and frozen patties and will serve six McDonald’s distribution centers and 2,900 McDonald’s restaurants throughout the Southeast, as well as four Nestlé manufacturing facilities. The plant’s opening has created more than 200 jobs for the local Opelika community.

The official ribbon-cutting was attended by GSF’s board of directors, CEO Mark Wetterau, McDonald’s executives and franchise owners, and city officials from Opelika. In his opening comments, Mayor Gary Fuller thanked the company for selecting the city and praised the organization for its values.

Prior to the event, Dr. Wayne Morgan, corporate vice president and president of protein products for Golden State Foods, said it took about four years of planning to develop and build this plant.

“It started with a search for the right location; knowing where our markets and distribution centers are, we knew that we needed to be in the Southeastern part of the United States, around Atlanta,” he said. “We started off with 28 potential sites, narrowed it down to three and eventually selected Opelika to be our partner. The local economic development council worked with us and made it a good fit.” 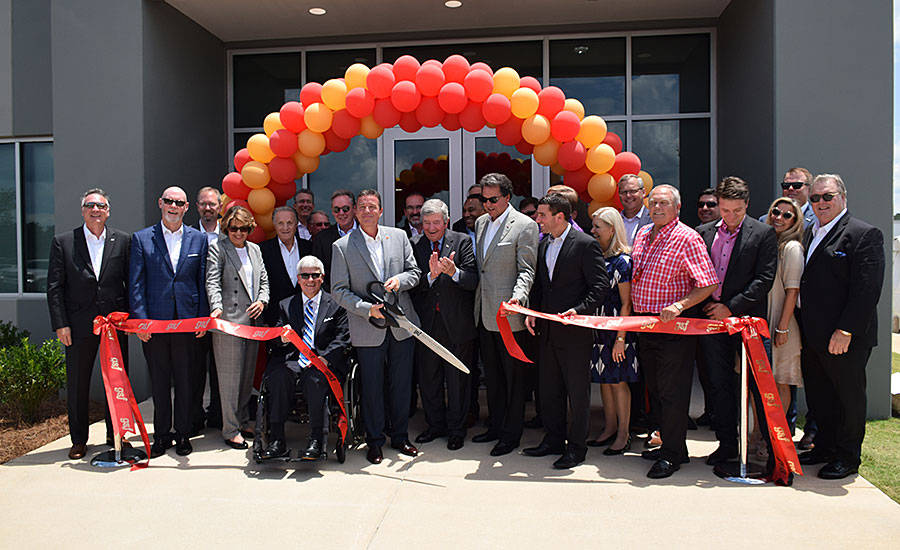 A key decision from one of its largest customers made it clear that GSF would need to make the Opelika facility its first fresh-beef processing plant.

“Our main customer, McDonald’s, has embarked on a new product line, which is fresh Quarter Pounders. As they rolled that product out, we were a part of the team that worked on that new product launch, and it was launched in May. Golden State Foods, along with McDonald’s and its other suppliers have made the fresh patty a reality throughout the U.S.,” Morgan says.

Morgan says the plant will produce 170 million pounds of product in 2019. It has 11 production lines for patties and a bulk grinding operation. While the majority of the products will be beef, the plant will also produce some pork products. Those burger patties and other products will be shipped throughout the southeastern United States, as well as markets in the Caribbean islands, Puerto Rico and South America.

The fact that the facility was a green-field project allowed GSF to design its process to be as efficient as possible in the production of burger patties. Raw materials come in through the front of the facility and are stored in a cooler. Processing is done through the middle of the plant, and the back of the facility holds the storage freezer and shipping area.

“We’re a high-volume, low-SKU type of operation, so flow is critical to our success,” Morgan says.

In his comments at the opening ceremony, GSF chairman and CEO Mark Wetterau pointed out that the relationship between GSF and McDonald’s stretched back 65 years. He also praised Morgan and his team for bringing the concept of the plant to fruition.

“It was a dream of Wayne’s, and he came in and had to convince the board [and McDonald's] that it made economic sense,” he said. “There’s always one sparkplug and leader that makes a difference in every organization. Dr. Wayne Morgan and his team did a remarkable job.”

“At the end of the day, it’s all about all of us working as one and continuing to thrive and grow -- not only Opelika, the state of Alabama, but this great country, America.” Wetterau added.