Zack Levenson, Golden West Food Group, talks about the company’s Meat District brand and how it has delivered on its promise to make waves at retail in less than a year.

During his visit to Golden West Food Group (GWFG) in Vernon, Calif., to profile the company’s success with the Jack Daniel’s Meats brand, Andy Hanacek, editor-in-chief of The National Provisioner, also spent some time discussing one of GWFG’s newest brands: Meat District. Zack Levenson, COO, spoke with Hanacek about the disruptive, premium-quality brand, which has grown exponentially in less than a year’s time. The brand originally featured premium burgers and has morphed to include marinated chicken wings and drumsticks — and is soon to include premium sausage products as well. What follows is a portion of their conversation:

Hanacek: What was the purpose of the launch of the Meat District brand? Give me the one-, two-minute history of the brand.

Levenson: With Meat District, we wanted to come out with a premium-quality, disruptive meat brand that had all the attributes, all the bells and whistles. We started off with the premium, fresh burger line, morphed that into an entire frozen offering, which then morphed into an entire fresh marinated chicken wing and drumstick line. The next morph will be into a sausage line. It features disruptive packaging — a pink-neon [logo] on a jet black package, so you could see it from a mile away. It's going to catch your eye and bring your attention over to the meat department. 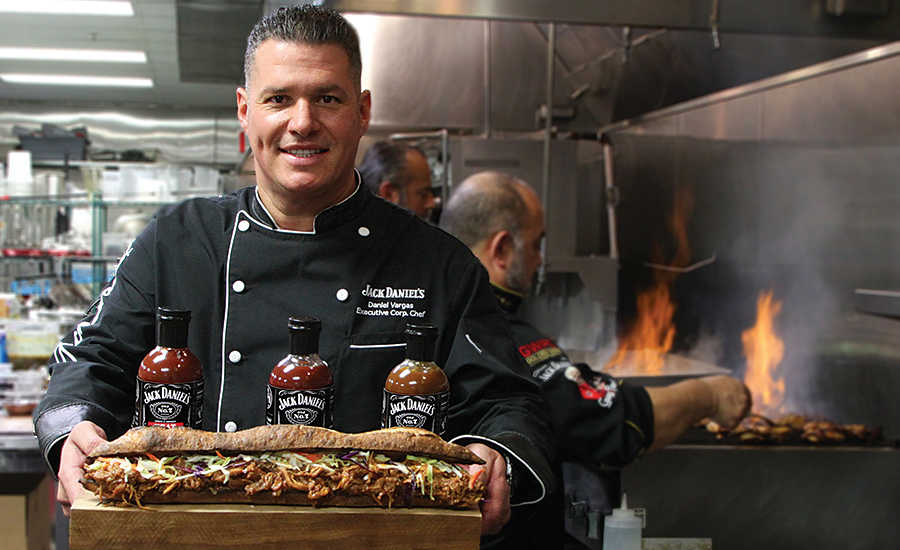 In 2007, Vernon, Ca.-based processor Golden West Food Group (GWFG) earned the licensing agreement, and the Jack Daniel’s Meats brand was launched. Since then, the brand hasn’t looked back, growing to become the No. 1 fully cooked barbecue brand in the U.S., according to Nielsen.

Hanacek: So, it launched in April 2019, less than a year ago; how has the reception been so far?

Levenson: It has been incredible. It's selling out in a couple of days, and we're getting emergency orders and add-ons to our orders. We're promoting very aggressively to get it out there. The comments we've had on our Web site from customers is incredible, and we believe it’s because there's nothing commodity about the product. On the burgers, we use whole-muscle product, antibiotic-free, no hormones on certain things. No preservatives, real cheese, no high fructose corn syrups. Then, we offer products using different cuts of meat, like briskets, chucks, tri-tips and short ribs — some really premium parts of the animal.

Hanacek: Where have you seen the biggest growth of these products?

Levenson: When we first went to market, we wanted to focus on our backyard, which is California. So California is obviously our biggest market. But with the success we had literally within the first few weeks, we just said, "It's like almost going viral." So we took it across the country, and today we're in several retail market chains across the country.

Hanacek: Talk about the sausage line that you’re launching (after presstime). What has gone into them? What are you featuring with them? What sets them apart?

Levenson: We’re starting with five different flavors. Ground chub sausage, not links. All pork sausage. The pork I'm using has no antibiotics ever, no hormones, born and raised, harvested in the United States, as well as gestation and farrowing crate-free. And another major factor of our sausage is no high fructose corn syrup and no preservatives. It's a billion-dollar category that we're looking to enter at a very competitive rate. We're starting with the five basic varieties — original, hot, sage, maple and chorizo — and we're going to expand from there.

Hanacek: What makes the Meat District chicken wings and drumsticks products different from products maybe already out in the meat case? What went into their launch?

Levenson: We wanted to keep establishing Meat District not just as a premium burger line, but we want it to be synonymous with grilling, barbecuing, family, tailgating. So we launched the wings just in time for football tailgating season. Then, we had some retailers actually ask us if we can do drumsticks too, because people [wanted a different grilling experience] than the wings. So we launched those. It's a fresh, marinated, never frozen product, featuring four flavors: sweet and sassy, a beer brined, a lemon herb, and zesty ranch. We are now launching two flavors: Sesame Teriyaki and Buffalo Mango Habanero.