From Technomic’s 2019 Flavor Consumer Trend Report, 56 percent of consumers say marinades used by the chef is an appealing way of adding flavor to a dish, says Lizzy Freier, senior managing editor of Technomic, based in Chicago.

“Most operators don’t call out flavors of marinades on the menu, focusing instead on the flavors patrons would identify on the plate — those with more obvious and specific visual (and thus flavor and craveability) cues,” says Maeve Webster, president of Menu Matters, based in Bennington, Vt. “Among those specifying a marinade, and prior to the crisis, kimchi-based marinades were really growing, leveraging the success of that item elsewhere on the menu.”

In addition, chili-based or spicy marinades were doing well, including those made with ancho and serrano peppers, she says.

Sweet and spicy flavors are popular, and they are bleeding into other categories beyond entrees, “including desserts and beverages, which speaks to its popularity as operators only start leveraging a trend across menu categories when it’s working well,” Webster says. “People’s palate has begun to shift away from super sweet, traditionally American, to enjoy sweet slightly tempered with/by other flavors.”

The use of sweet and heat ingredients is a great example of practicing balance, and they provide versatility and have a broad reach.

“In the kitchen, I love experimenting with different fruits and honeys, and then spiking them with an unexpected spicy surprise in my cooking,” says Mitch Dingwall, senior director of product development at Golden State Foods. “Our innovation team at GSF receives frequent requests to create flavor profiles that include sweet-heat combinations. Some of the recent recipe work and prototypes from our chefs and food scientists have included strawberry and black pepper, passion fruit and habanero, mango and jalapeno, sriracha and peach, orange blossom honey and ginger, and blackberry and chipotle.”

The use of these sweet-heat combinations could be used in a variety of different ways, including a new, exciting dip for chicken strips, nuggets or fries, slathered on the bun of a crispy chicken sandwich or used to drizzle over a fresh salad, says Dingwall. 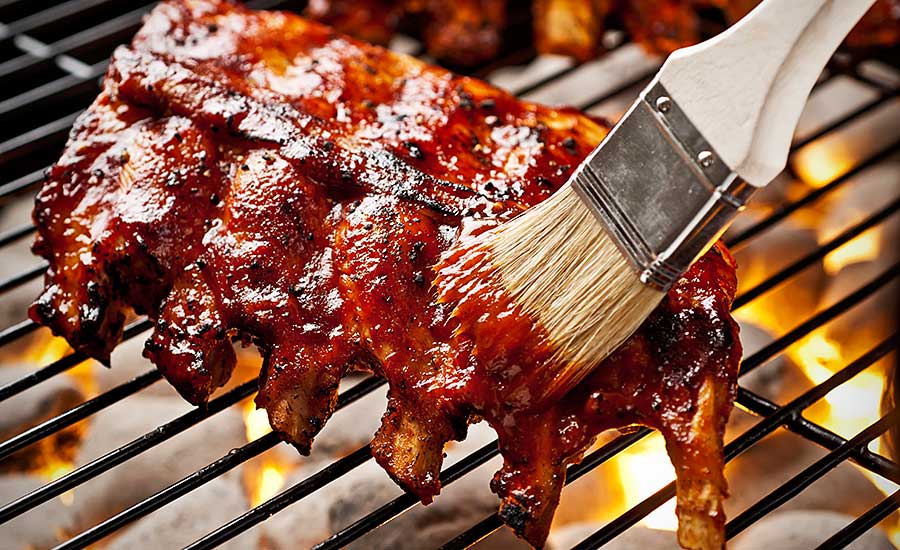 “They could even make an unexpected appearance in a smoothie, iced tea or lemonade,” Dingwall says. “There is a wide spectrum and the possibilities are endless in the marriage between sweet and heat ingredients.”

At retail, some clear flavor trends are emerging in the marinade space. “When it comes to flavors, citrus-based flavors are showing the most growth, though garlic and teriyaki are the No. 1 and No. 2 flavors in terms of product launches in the U.S. for the period from Jan. 1, 2016, to April 12, 2020,” says Tom Vierhile, vice president of strategic insights North America at Innova Market Insights, based in Fairport, NY.

But according to Vierhile, the biggest growth rates among the top 10 flavors in the market for the period noted were:

“This growth seems to indicate less interest in sweet flavors and more interest in other flavor types including sour flavors for marinade products,” Vierhile says.

“The path to discovery for international cuisine and flavor trial often comes from foodservice experiences, suggesting that overlaying cuisines of interest with items menued is fertile territory to product or recipe development inspiration,” notes Mintel’s report.

Younger consumers are most likely to express a strong interest in sauces/marinades associated with international cuisines, reports Mintel.

More flavorings will focus on infusing what happens during the cooking process into the marinade system. “Think about capturing the culinary reactions and flavors that occur during all the different cooking processes and techniques across the world, as well as the different culinary vessels and tools that produce unique outcomes,” says Dingwall. “Capturing and incorporating these flavor systems into the products will be a great way to differentiate and innovate within the marinade category.”

Many of these techniques and tools can be complex, time consuming and require skills that most operators/home cooks can’t replicate.

“Imagine a flavor system in a marinade that mimics and captures the flavors generated during foods seared in a wok, wrapped in banana leaves, buried under ground, roasted over an open spit or on a scalding hot rock,” says Dingwall. “Mexico is a great example of this as shown in their many complex cooking techniques and tools. Other places include India with the tandoori oven, Northern Africa and their tagine, Japan’s yakitori grills and of course, the many barbecue methods used in the U.S., just to name a few.”

All these different techniques and tools open up a lot of space for creativity and new ideas. “They each have a unique and nuanced flavor profile that can bring differentiation, authenticity and excitement to a marinade and the end dish,” Dingwall says. “Many of the flavor and spice companies study and conduct technical research on the results of using these different techniques, culinary reactions and the equipment or tools used in cooking across the world that generate flavor.” 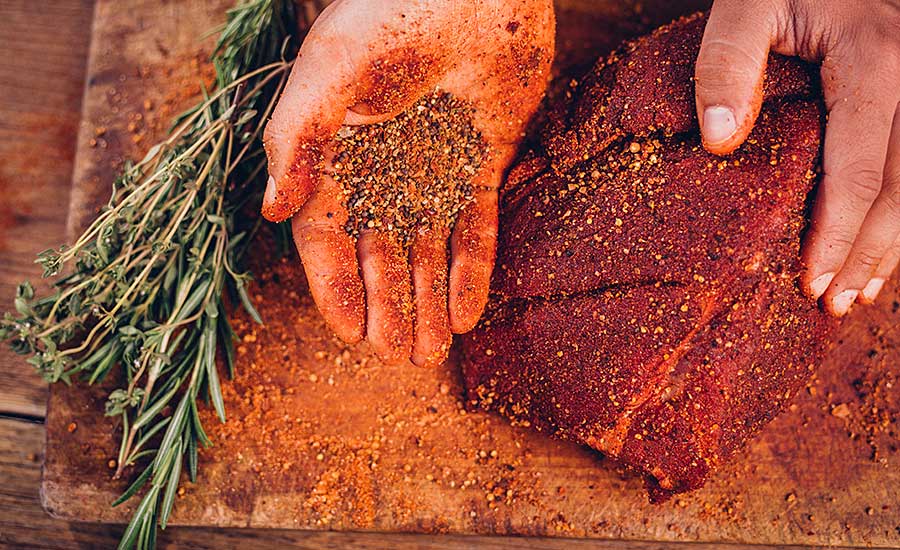 The ongoing trend of focusing on clean labels and improved nutritionals is expected to continue.

“Typically, marinade systems consist of a salt, water, phosphate combination that may or may not benefit the consumer,” Dingwall says. “Currently, ingredients such as phosphates (tetrasodium pyrophosphate, potassium pyrophosphate and sodium tripolyphosphate, for example), starches, dairy proteins, various acids, flavors and shelf-life extenders (antimicrobials and antioxidants) are on labels as part of a marinade or other foods.”

Why these items are included is likely not understood by the average consumer. “I believe the marketplace will continue to challenge the industry and culinary/food science communities to remove these items, and others, that are unfamiliar,” says Dingwall. “This is clearly a technical, sensory and cost challenge for all involved, but certainly a trend.”

There is a wide spectrum and the possibilities are endless in the marriage between sweet and heat ingredients."

Trending product claims are also focusing on health. “The three fastest-growing claims for marinades over the same period noted above help explain some of what is happening on the flavor front,” says Vierhile. “The HFCS-free (high-fructose corn syrup) claim grew at a compound annual growth rate of 85 percent for the period from 2016 to 2019, indicating efforts to clean up ingredient lists and maybe limit sugar content at the same time.”

In addition, sugar-free claims grew at a compound annual growth rate of 21.6 percent over the same period, “again bolstering the case that marinade makers may be backing off of sweet flavors and embracing flavors known to be less sweet, like sour citrus flavors, sour flavors like kimchi, herbal flavors, spicy flavors like ginger, etc.,” Vierhile says.

The keto diet trend is also having some impact on innovation by encouraging companies to dial down sugar content, he says.

According to Vierhile, the three fastest-growing health claims among the 10 most prominent claims for marinades include:

“These results do indicate that marinade makers are doing what they can to appeal to consumers increasingly inclined to examine ingredient lists,” says Vierhile. “Some other claims that grew at over a 20 percent compound annual growth rate for the 2016 to 2019 period include gluten free, GMO free, organic and sugar free.”

These results suggest the clean-label trend is alive and doing well in marinades, and is having a strong impact on guiding and shaping new product innovation.

The future at retail and foodservice, in general, is very murky right now given the ongoing coronavirus 2019 pandemic. “Any operator having survived the COVID-19 crisis will be in full recovery mode immediately after and into the recession,” Webster says. “Many operators will be looking to cut costs, streamline the operation and focus only on those items that sell well and, hopefully, are profitable. There will be far less experimentation for the near future and likely through 2021.”   NP