This website requires certain cookies to work and uses other cookies to help you have the best experience. By visiting this website, certain cookies have already been set, which you may delete and block. By closing this message or continuing to use our site, you agree to the use of cookies. Visit our updated privacy and cookie policy to learn more.
Home » Changing consumer lifestyles and eating behavior in response to COVID-19
Coronavirus CoverageMeat and Poultry ProcessingTurkeyDeliFormulation Strategies
Formulation Strategies | Lunch Trends

Changing consumer lifestyles and eating behavior in response to COVID-19

It is the perfect storm for the lunchtime consumption of meat and poultry.

The massive increase in workers and children at home during lunchtime because of the COVID-19 pandemic, along with a stronger need to save on food expenses and for convenient eating is leading to skyrocketing demand for sandwich meats.

“There is an earthquake around grab and go and it will be felt for many years to come,” DuBois states. While grab and go typically generates about 20 percent of deli lunch meat sales, reductions in deli hours and staffing, closings of full-service deli counters and greater shopper interest in getting in and out of stores quickly are contributing to the current 30 percent share, he states. While grab and go activity was increasing prior to fallout from COVID-19, market share for the category was not forecast to reach 30 percent until 2024, DuBois says.

Dollar and unit sales of packaged fixed weight luncheon meats, meanwhile, were up 13.5 percent and 7.5 percent, respectively, for the week ending April 19, 2020, versus the year-earlier period, IRI states.

“Most Americans are looking for more protein in their diets and these meats deliver on those goals,” he says. Seifer adds that the large base of consumers who are seeking to create more meals at home “are watching their budgets and will look for options that are easy to prepare, familiar and have staying power in a pantry or on the refrigerator shelf.”

With fewer consumers shopping the full-service deli, sales of random weight lunch meats at deli counters are flat as retailers have less of an opportunity to upsell shoppers, generate impulse sales and solidify customer service with face to face interactions, DuBois says.“It is reducing the need for service staff and starting to illustrate what a reinvention of the category will look like.”

The merchandising of grab and go meats, meanwhile, is set to evolve with the growing popularity likely to result in the availability of more proteins types, additional brands and a wider variety of package sizes in larger bunkers, DuBois notes.

“A lot of ‘beyond the deli counter’ thinking will move out to the sales floor and the grab and go cases,” he says. 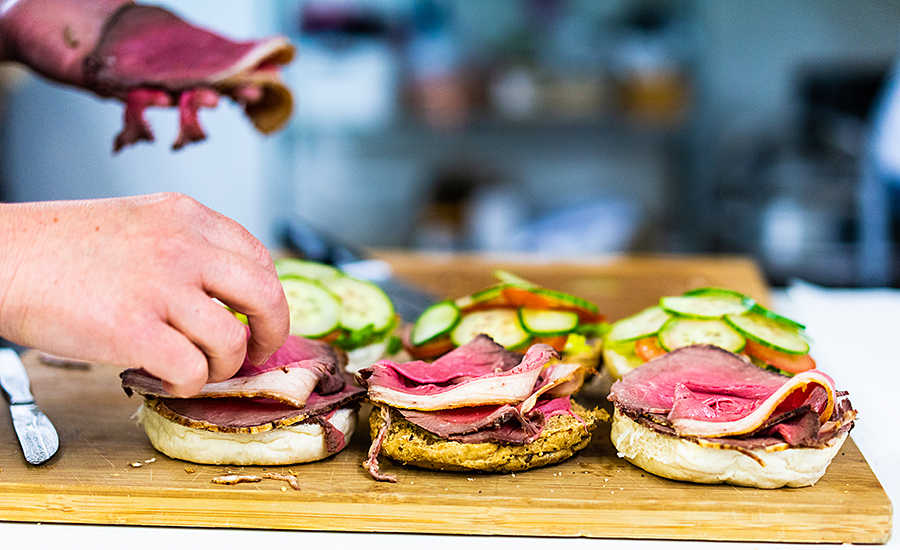 The double-digit sales increases for packaged fixed weight lunch meats are particularly significant as the category has been flat or declining in recent years, DuBois says. Consumers’ perceptions that the vacuum packaged items are safer and less expensive are helping to trigger activity, he notes. “Many of the shoppers who were avoiding the packaged products because of the impact on the environment now have a stronger interest in their personal health and well-being. The growth of the products are off the charts.”

He adds that supermarket operators should differentiate their lunchtime options by marketing unique or signature items that only are available in the companies’ outlets. “Everybody has premade sandwiches,” he states. “Retailers need to examine what they can do to make their offerings better or different from competitors.”

Along with the strong growth of grab and go and fixed weight deli lunchmeats is a greater demand for packaged and fresh meat and poultry in supermarket meat departments. Category revenues were up 34.1 percent for the four-week interval ending April 19, 2020 versus the year-early period, IRI reports. Helping to spur growth are more at-home lunch eating occasions, DuBois states.

He says processors are responding to increasing interest in the meat and poultry by producing larger package sizes that contain more chicken breasts and other cuts, as well as additional value packs to make it easier for consumers to stock up. “Every day is practically Thanksgiving on the retail side,” DuBois states. The expanding meat department activity, however, is resulting in fewer price promotions because of retailers’ concerns about a possible lack of inventory throughout the promotion period, DuBois says.

Down period for prepared foods

In contrast to the meat department activity boom, revenues for deli prepared foods are cratering with sales down about 40 percent from a year earlier as consumer and retailer safety concerns are resulting in fewer visits to the case, a reduction in meat and poultry options and even the closing of counters, DuBois states. He adds that a total reinvention of the category over the next five to 10 years was imminent even prior to the COVID-19 pandemic.

“It will be shocking if many retailers still have prepared food sections in coming years in which they source ingredients, make all the dishes and manage the labor and shrink behind it,” DuBois says. “Most are now just offering core items that they can package safely, such as rotisserie chicken. When sales drop 40 percent, there is a world of hate in the department.”

He notes that while prepared foods activity has historically been growing and selections often are strong brand identifiers, the category is difficult to operate. A likely evolution will be partnerships with foodservice operators in which popular restaurants develop and sell prepared foods to supermarket deli customers under the restaurant brand, DuBois says, which will reduce store labor requirements and shrink and create more excitement about the offerings.

Wisner states that supermarket deli operators can further add efficiencies and enhance lunchtime meat and poultry income by mimicking the pharmacy and installing drive-thru windows. It will enable consumers to conveniently and quickly garner lunch sandwiches and other protein options after ordering via an app on their smart phones, he says.

“The windows are successful at fast food outlets and particularly important now that consumers want to avoid crowds and the need to stand in lines to pay and sometimes order their deli selections,” Wisner states. “Most retailers are stuck doing the same things and not looking to aggressively break the mold and find new opportunities. Offering drive-thru windows is so ridiculously obvious. You have to make the process faster.”

“Retailers should focus on their strengths, and that includes getting creative with sandwich combos that contain different meats and cheeses,” he states. “Sandwich shops do not usually have the range of meats that an instore deli can offer.” That includes meats from a charcuterie, which can include varieties of salami and smoked options, he notes.

“Instore delis have to look outside the box and not just be a destination for shoppers seeking traditional lunch sandwiches,” Richard says. “Retailers need to consider additional reasons why people would want to buy meats from their locations and how they can make the deli shine.”

He adds that consumers also are “increasingly hungry for the details behind the products they consume, hence the growing attention toward clean label products including natural or organic offerings.” The compound annual growth rates for new product launches of deli meats with “natural” and “organic” descriptors grew 26 percent and 45.8 percent, respectively, from 2017 to 2019, Innova reports. In addition, launches of products containing the word “uncured” nearly doubled between 2016 and 2019, while new selections containing the word “antibiotics,” such as “free of antibiotics,” almost tripled during that period, Innova states.

The strong opportunities for lunchtime meat and poultry consumption are likely to continue as 18 percent of consumers in a recent IRI consumer survey indicate that they plan to work at home “much more often” and 19 percent state that they expect to do so “a little bit more,” even after the COVID-19 restrictions ease. “There will be a lot more home lunch occasions than in the past,” DuBois says. “Expect to see 15 to 20 percent greater sales for the meat department over the next year even if foodservice opens up. We will not be going back to zero growth in the department.”

Grab and go also is forecast to be increasingly popular, he says, as “many Millennial and Generation Z consumers have no extra desire to take the time to talk with deli staffers behind the full-service counter. With the patience level of the younger generation low, grab and go is perfect for their shopping experience and also aligns with the huge rise in e-commerce as grab and go is essentially what goes into an e-commerce package from an on-line order.”

In addition, deli lunchmeat merchandisers will further benefit by catering to smaller households and supporting the diverse product demands from within households, Vierhile states. He notes that one of the “hotter trends” is a move to smaller size offerings as launches of deli meat products in packages of 80 grams (or roughly 2.8 ounces) or smaller nearly doubled between 2016 and 2019. “Many of these packages are intended to be single-serve size which can help cut down on product waste,” Vierhile adds. NP