People love protein, and meat snacks certainly have an abundance of it. Today’s meat snacks are not just for meat lovers but consumers who want another high-protein, low-carb option.
“Meat snacks are ideally positioned for the keto, paleo and other high-protein, low-carb lifestyles that are dominating the diet scene,” says Anne-Marie Roerink, principal and founder, 210 Analytics, based in San Antonio. “Protein has been a popular ingredient for more than five years and appears to have staying power. Whether protein-enhanced snacks or snacks that inherently have a high protein content such as meat snacks, growth has been far above average.”

Meat snacks such as beef jerky, meat sticks and beef bars have more than held their own during the pandemic. “Now a $4.5 billion market, meat snacks grew 21.8% over the 52 weeks ending November 28, 2021, according to data insights firm IRI,” says Roerink. “Compared to the pre-pandemic normal of 2019, this is up 33 percent.”

At the same time, units and volume grew as well. “In fact, volume grew 15.8 percent over the 52-week period, signaling strong demand as consumer mobility is growing,” says Roerink, noting that there is still a substantial gap between dollar growth and volume growth, which signals inflation and fewer promotions.

What has made meat snacks so popular during COVID-19? “It’s hard to know exactly, but they are convenient, portable, and appeal to consumers who are snacking more and not dining out as much,” says Mark Vieth, president, Wenzel’s Farm, in Marshfield, Wis.

Meat snacks have a good following and tell a great story because they highlight, once again, that meat has protein, which seems obvious but is still worth pointing out. It’s easy for consumers to see them in stores, and they fit into their diets well, says Terry Houser, Ph.D., associate professor at Iowa State University, Ames, Iowa.

“It’s an exciting time for the category,” Houser says. “People like the product and the margins are good. I tell small meat processors they should make these products.”

Large and small brands alike are showing double-digit sales, along with some up-and-comers with triple-digit increases with innovative new products that mirror trends in the fresh meat department, says Roerink. 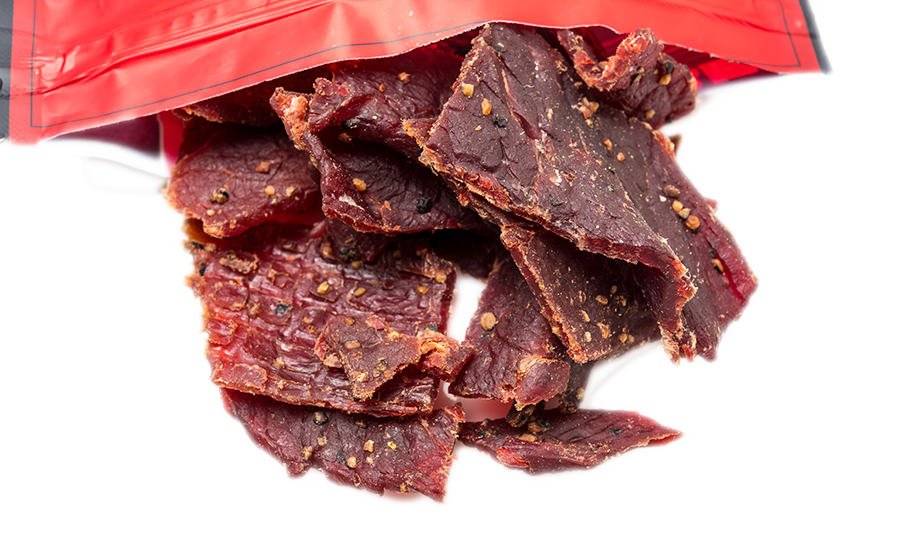 How the jerky is made

Beef jerky may not have many ingredients, but it carries a high price. The reason? How it’s made.

“Beef jerky is made from lean cuts of whole-muscle beef, which is why it’s expensive,” says Jeff Sindelar, Ph.D., professor and extension meat specialist at the University of Wisconsin, in Madison. “It’s sliced, then either marinated or dry cured, laid out on racks or hung up, and then goes through a thermal cooking and drying process to lose moisture — but just low enough so it doesn’t support pathogen growth.”

Sometimes, the whole-muscle beef is injected first, so there is uniformity of ingredients before the meat is sliced, he says. The standard formula is to use salt, a sweetener such as dextrose or sucrose, spices and smoke. “Beyond that, the sky is the limit to create a unique flavor profile,” Sindelar says.

The other way to create beef jerky is by using restructured or ground and formed beef. “The ground beef used for beef jerky could have up to 10% fat, instead of the 5% fat or less in whole-muscle beef, because the grinding and mixing process adds juiciness,” Sindelar says.

Most jerkies are made from whole-muscle beef. “But some folks are making ground in reformulated beef,” says Terry Houser, Ph.D., an associate professor at Iowa State University, in Ames. “Most meat sticks and bars are from ground beef.”

It’s easier to portion control and add inclusions to meat bars made from ground beef, Houser says. “Meat bars made from whole-muscle meat are less uniform, more labor intensive and created by hand so have lower volume,” says Houser.

More options exist today to acidify meat snacks. The traditional method is to add a starter culture to gradually reduce the pH level or add an unbuffered vinegar to the meat batter.

“Now we can add encapsulated acid technology to the meat batter to cause the pH to drop, with no fermentation,” Houser says. “It’s similar to fermentation but occurs in less time.”

Meat snacks tend to be high in sodium, but it’s hard to reduce salt without affecting taste.

“Saltiness is a key feature of jerky,” Sindelar says. “If you take out too much salt, it changes the product but it’s feasible to do.”

These new products can feature dried meat snacks made with claims-based meat. “In addition to organic and antibiotic-free meat, grass-fed beef in particular is a popular innovation in dried meat snacks,” Roerink says. “Consumers see grass-fed beef as healthier for them and better for the animal, and it has been an area of aggressive growth for the meat department for years.”

Strong flavors have been around for a while, and “as palates change, sweet and spicy continues to be popular,” Vieth says.

“Now, literally the sky’s the limit on what flavors are being added,” Houseradds. “Millennials like a lot of variety, high quality, new flavors, and that is pushing sales, no doubt.”

Dried meat snacks are also moving beyond beef and pork to include bison, turkey and chicken, Roerink says. “Additionally, single-serve bacon snacks are entering the marketplace,” she says.

Is there any interest in plant-based meat alternatives? Some snacks are using ingredients such as mushrooms to create protein snacks that are similar to dried-meat snacks in look and positioning, Roerink says. “Blended items that combine animal protein with other items such as mushrooms create meat snacks that the consumer may view as a better-for alternatives,” she says.

That being said, plant-based or blended snacks may not appeal to the typical meat-snack consumer or vice versa. “There are some plant-based alternatives, but nothing that is flying off the shelf,” Houser says. “Someone who would buy a meat alternative is not going to want a product that is half meat.”

While beef is the No. 1 ingredient in conventional and traditional channels, beef and pork make up most traditional mixed products. “Poultry doesn’t do as well with conventional jerky products, but turkey is increasing in the natural channel this year,” Vieth says. “Turkey is a leaner meat, which appeals to people who are already health conscious.” 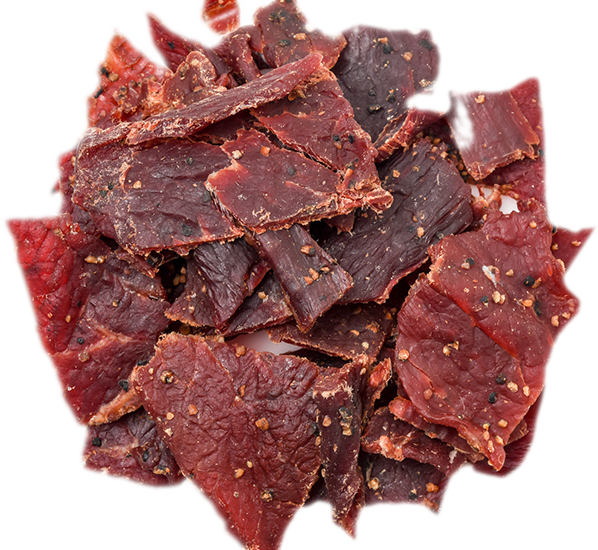 Salt plus protein is a winning formula. Meat snacks appeal to all consumers who want a satisfying treat. Here’s more information on who is buying them:

Sugar-free items are another area of innovation for dried meat snacks, addressing the needs of keto, paleo, and other low-carb diets, Roerink says.

Meat snacks will continue to grow in popularity, as there is still room for new varieties, formats, and flavors, Vieth says. “People see meat snacks as a healthier option than traditional snacks, demand for protein is growing and consumers are still looking for more variety,” he says. “I think packaging in the next five to 10 years will focus more on sustainability.”

In addition, look for retailers to get in the meat snack market. “In 2022, I expect to see more big retailers with their own label in meat snacks,” says Vieth. “Some of the bigger chains are seeking out — if they don’t already have one — private-label opportunities in meat snacks.”

(Stuck at) Home for the holidays?

State of the Meat and Poultry Industry 2018: Will the stars stay aligned?

Food Safety Research: A look at the at-home cook